We left Burrets Rapids after a lovely lunch…chatted with the crew from the Pogo as well as a ship (only way to describe it) from Ohio. After some restaurant recommendations from me, we were off!

The afternoon was a lovely paddle, northeast warm winds notwithstanding ( I know eh? NE are supposed to be cool!!!) anyway the paddle showed us lots of Osprey as well as blue heron, it was lovely. The boats going by for the most part were very polite and slowed at the sight of us. Of course there had to be one yahoo who went through the river st full tilt even though there were countless signs for no wake. Oh well, we survived, and I’m sure Karma will get the driver! 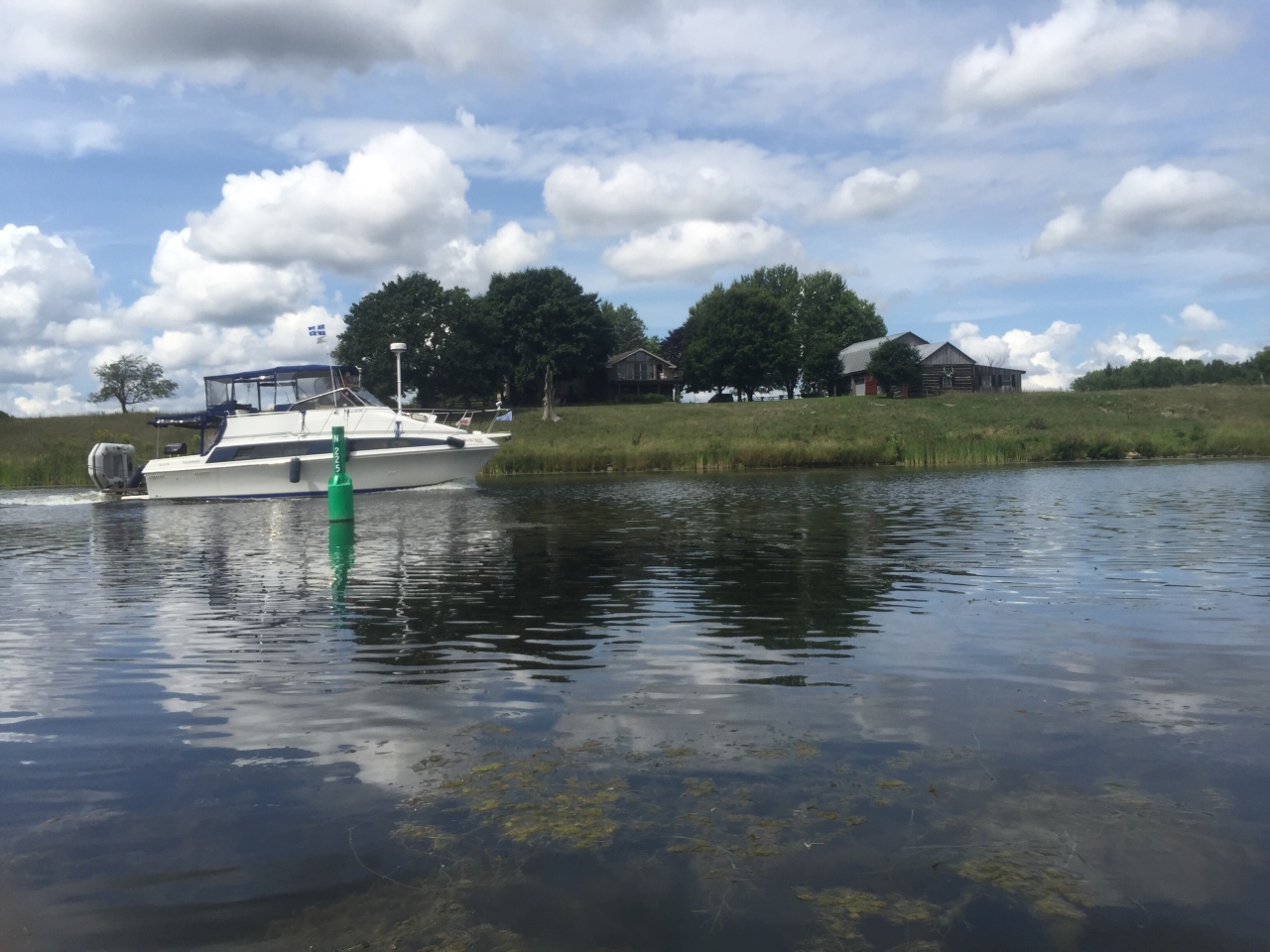 We wound around the river as it meandered towards Kemptville. My memories of childhood kept coming back… the Rideau is a weedy reedy river .

While there are lots of McMansions being built along its shores, they build docks for their boats, but little appeal for swimming! ( anyone looking to buy property, and not from Ottawa should stick south of the Lower Rideau!! One shot that I’ve been trying to get for days is the seagull perched on the channel markers. We passed so many, and whenever I got my camera ready, they flew off!! Not this time!!! 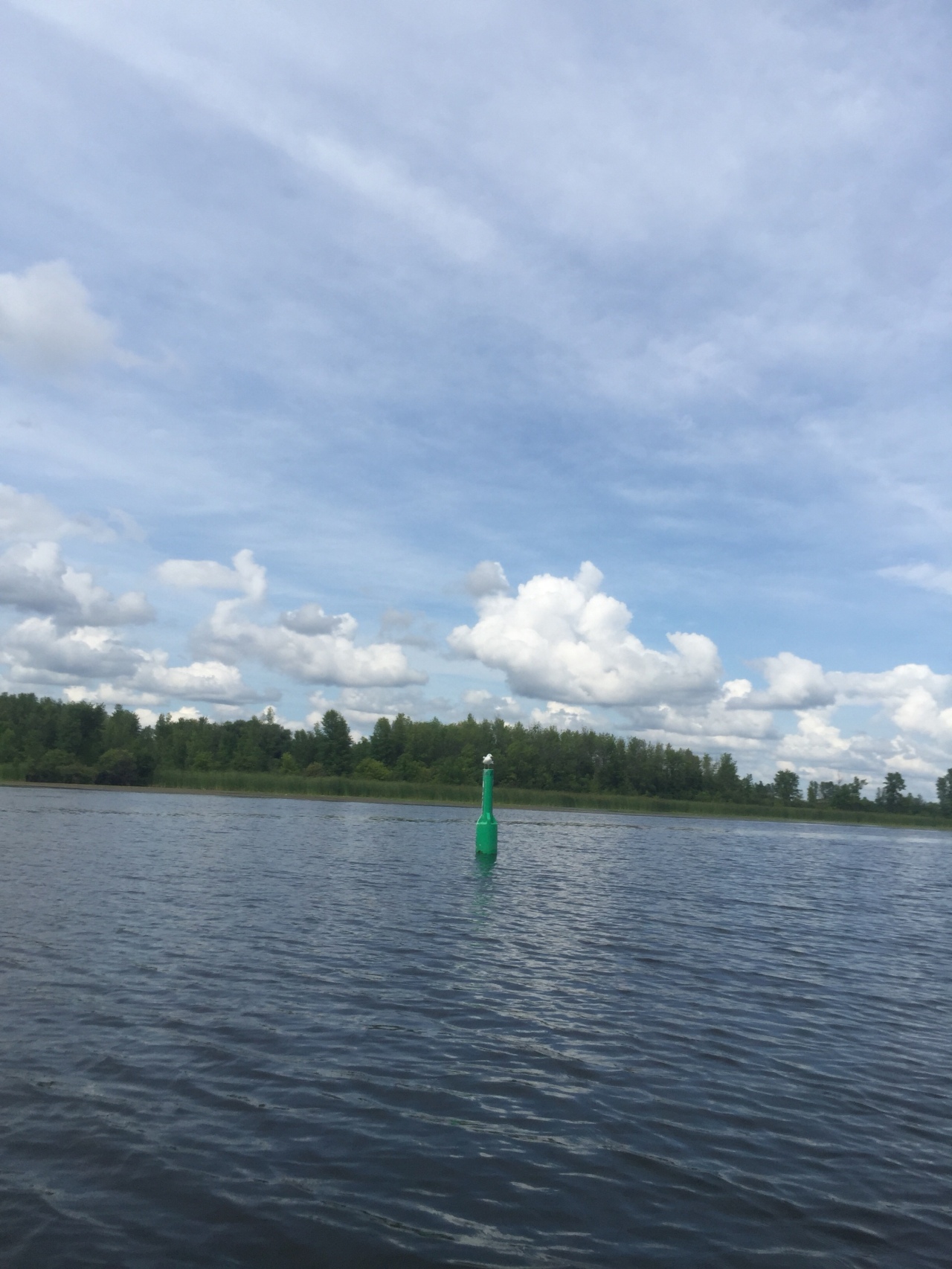 As I paddled along, I often though of the Camino. You get to the point in the day where your body is aching and you are looking to rest. Just put one foot in front of the other, my mid would tell my body! Well in this case, just put the paddle in one more time and watch the water go by ( or weeds in many cases!)

Our destination was Rideau River Campground. Dan said they had canoe in sites, and he picked one as close to the water as possible. What they didn’t tell you in their advertising was that the site could be accessed by a break in the feeds, 200 m from the site! Surrounded by marshy water ( no hope of a swim tonight) we got our stuff to the campsite after lots of searching! The good news is that the showers and bathrooms are not far from our site! ( a shower immediately after the paddle was in order, after which I dosed myself in bug spray ( lots of tick warnings here!) only to have to shower again before bed! Oh well, we’re not paying to water!!!

Our camp was made, showered and a wee libation was in order to take the edge off! At this point, I’m not sure I want supper after munching on appetizers ( thanks Kim for the chips and peas snaps!). But Dan insists! I guess I’ll have to comply as he’s foraged wood from many sites around us so that I could have a campfire.

I started supper and Dan started to build the kindling up for the fire, when around the corner a parks truck came! Out popped a young man who was told to bring us a bag of firewood that had broken… his boss had met up with scavenger Dan earlier and knew we had paddled in. Another blessing for us!

The fire roared with all our wood and we enjoyed a lovely evening inspire of the location! When bedtime came I went for my second shower ( yes, yet another redeeming featur of this campground!) and then bunked in for the night!

We had seen a forecast for rain this am, and none came! We were able to make our usual breakfast of oatmeal, granola and dried fruit chased down with a coffee. We were able to break camp by 8:30, and were on the water by 8:45. Here’s a shot of our put in… not the nicest I’ve seen by a long shot, but it worked!

Our paddle today was going to be long. About 28 km… our longest yet! The forecast had a 50 % chance of rain. Clouds played with us as we canoed. We saw some interesting sites along our narrow meandering travels. Soon after we began, we paddled under the 416.

It was interesting to see the changes in accommodation as we got closer to Ottawa. The sleepy little summer cottages with small fishing boats seemed a bygone lifestyle when compared with the McMansions built along the river .

About the half way point we decided to stop for lunch. We found an unoccupied dock at Hurst Marina and took over a picnic table for 20 minutes. I think we found the breeding spot for all the big boats on the Rideau!!

After lunch we came across this interesting boat. A tour going going by at the same time explained that it was originally an ice breaker on Lake Erie, then a rum runner during prohibition, a tour boat on the lakes, and somehow it ended up here! 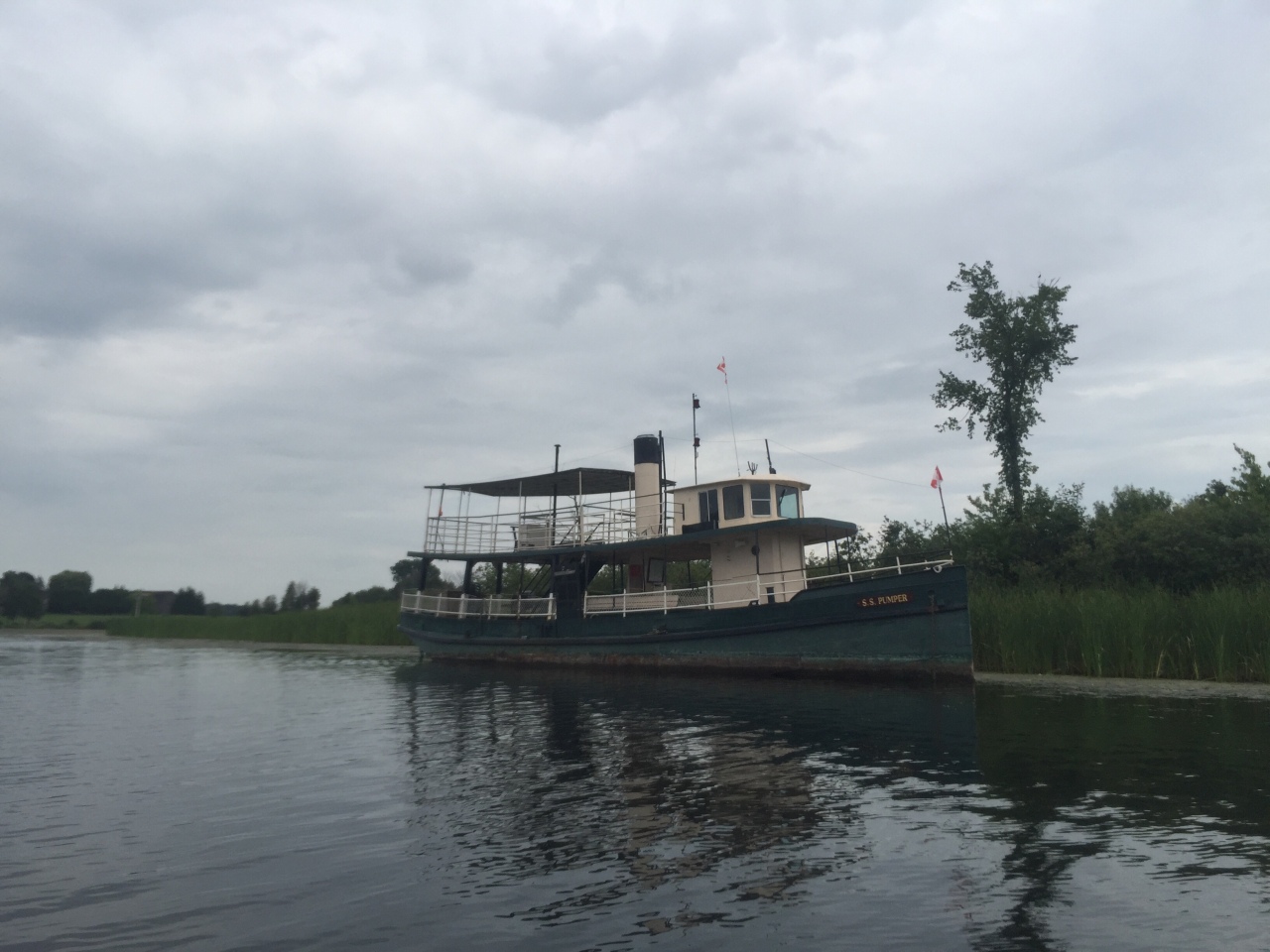 As we enjoying the scenery ( funny how there was little weeds or cattails I front of the McMansions) the promised rain decided to deluge!

Dan opted to pull over and put on his poncho, and I opted to get wet! With my swimsuit on under my quick dry clothes I welcomed the cooling rain!

We meandered further along the narrow river trying to cut as many corners as possible at this point! We were still impressed by the number of water fowl… Osprey Eagles, kingfishers, blue herons, ducks ( some with second clutches!) and of course the ubiquitous Canada geese!

The length of the paddling day meant that we had to reach deep into our Zen like rhythm ( or yip at each other) in order to ignore the pains we were getting in our lower backs and butts. We knew it was going to be a long day, so in the end we just grinned and bore it!

The rain cleared and we had arrived at Long Island ( longer than we would have liked!). But we soon arrived at the locks and for a change, we put out at the top end. Much nicer campsite and easier access the the washrooms in the lock masters house.

We put up the tent, and hung lines the dry what little that got wet! Yes, when you travel by canoe everything gets packed into dry bags!

Finally we had a chance to relax in a ray of sun and watch the lock crew as they did their job! So lovely as we sit at a bench with a back, sipping wine, watching others working away!

This guy is foot cranking the gear to operated the turn bridge!

I checked with the lockmaster earlier, and the closest restaurants are about 5 km walk. Normally that would be ok, but coming home in the dark after supper crossing a dam… well, just didn’t seem wise! I guess it’s cooking again tonight!

After a nice meal we decided to take our bench once again at the top of the lock and enjoy a wee dram! 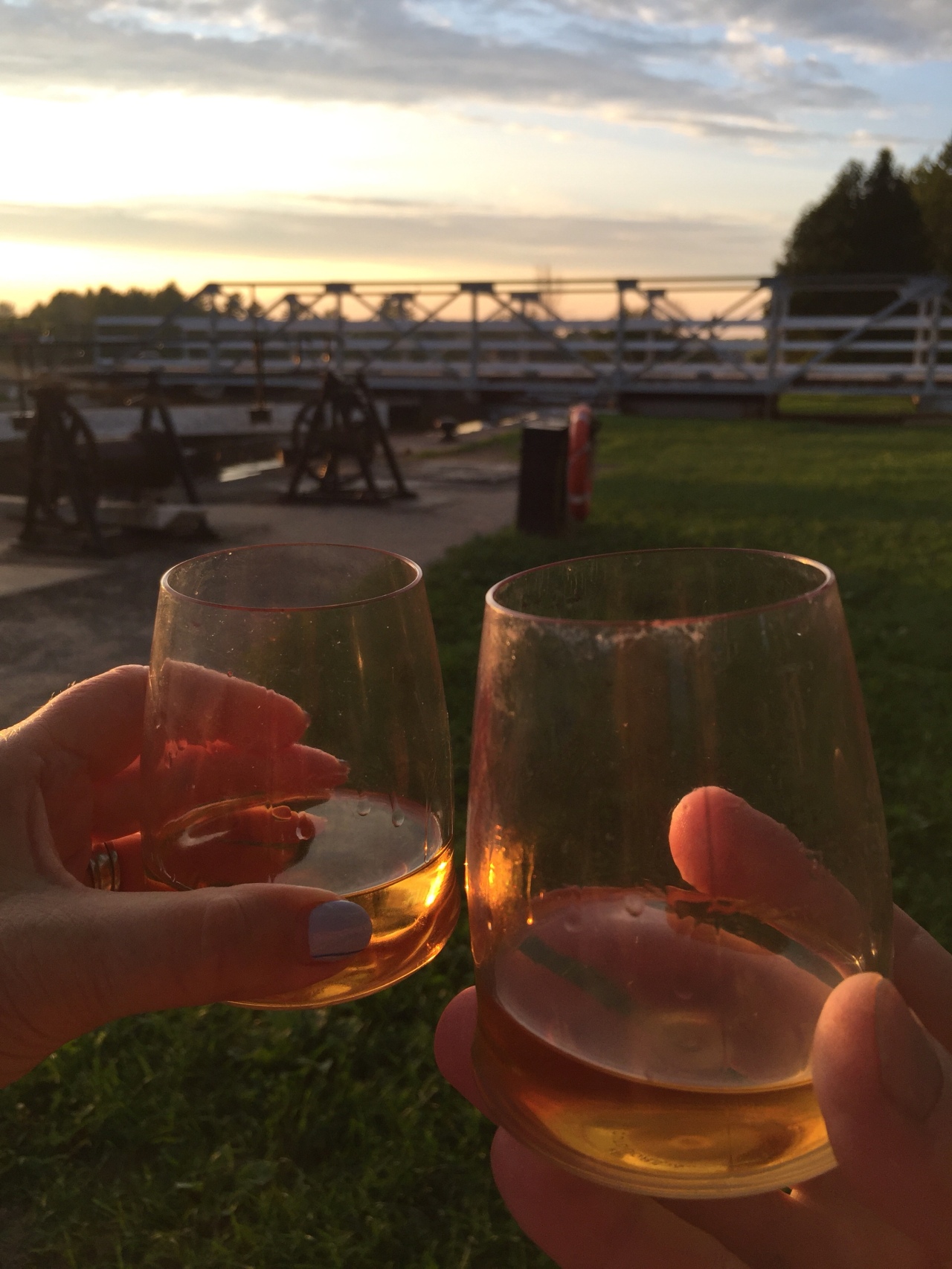 After drinks it’s time for a quick sink bath and then off to bed! Tomorrow we visit the Prime Minister, or at least his house!!!