It’s interesting when you spend 5 weeks in Spain… Wake up early and set out before the sunrise at 7 am…well, we’re not in Spain anymore!  I had forgotten just how far north we had come, but this morning brought it home!  I woke up to some rays of sun (which they haven’t seen in weeks here!) streaming in through the crack in our blackout curtains.  Thinking I should start getting a move on, I grabbed my watch to see how late I had slept in… 4:30 am!!!! Like I said… Not in Spain anymore!  And while the sun was initially shining, the day progressed to a little overcast intermittently, with heavy winds at times ( not unlike the one trying to blow us off the mountain as we descended to Roncevalles on Day 2!)…. Our host said at Breakfast that the BBC had finally announced that summer had come!!!! At 11-14C it’s not my kind of summer!!!

Anyway, enough about weather!  I finally managed to stay in bed until 7:30ish when it was time for a coffee… French Press ready and waiting in the room, I was in heaven!! Then a leisurely getting ready for the day and down to breakfast…we were not dissapointed!!! 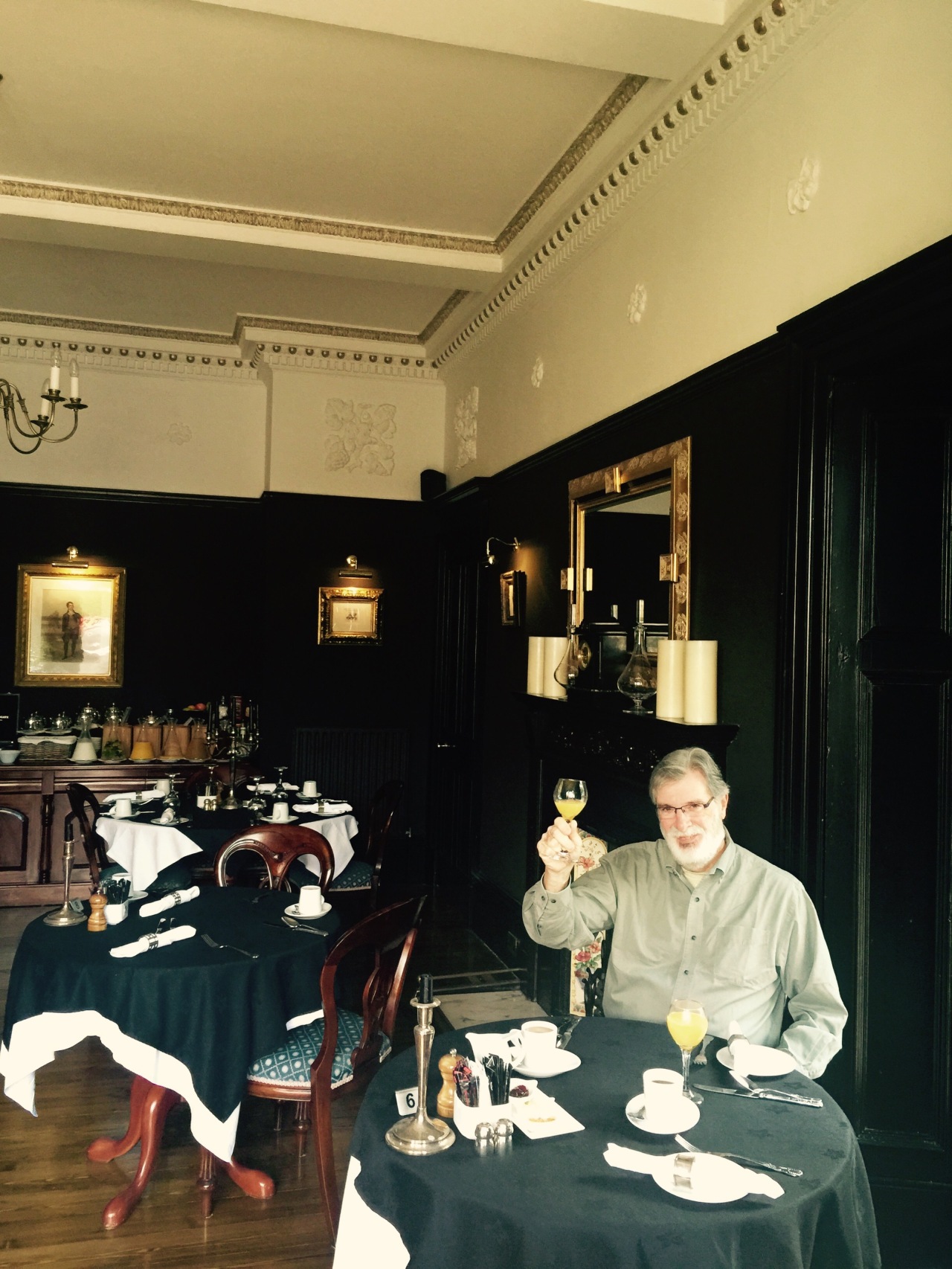 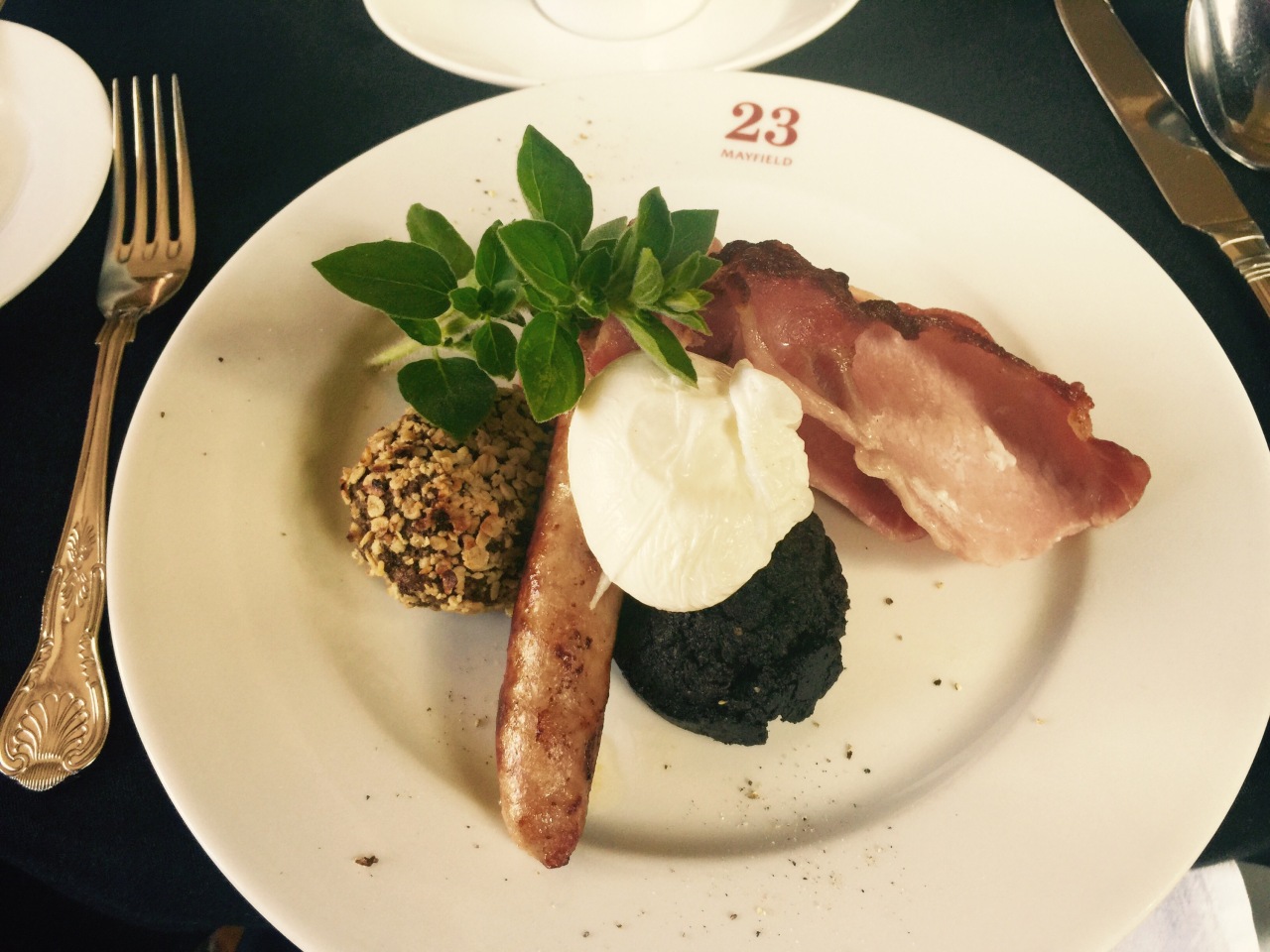 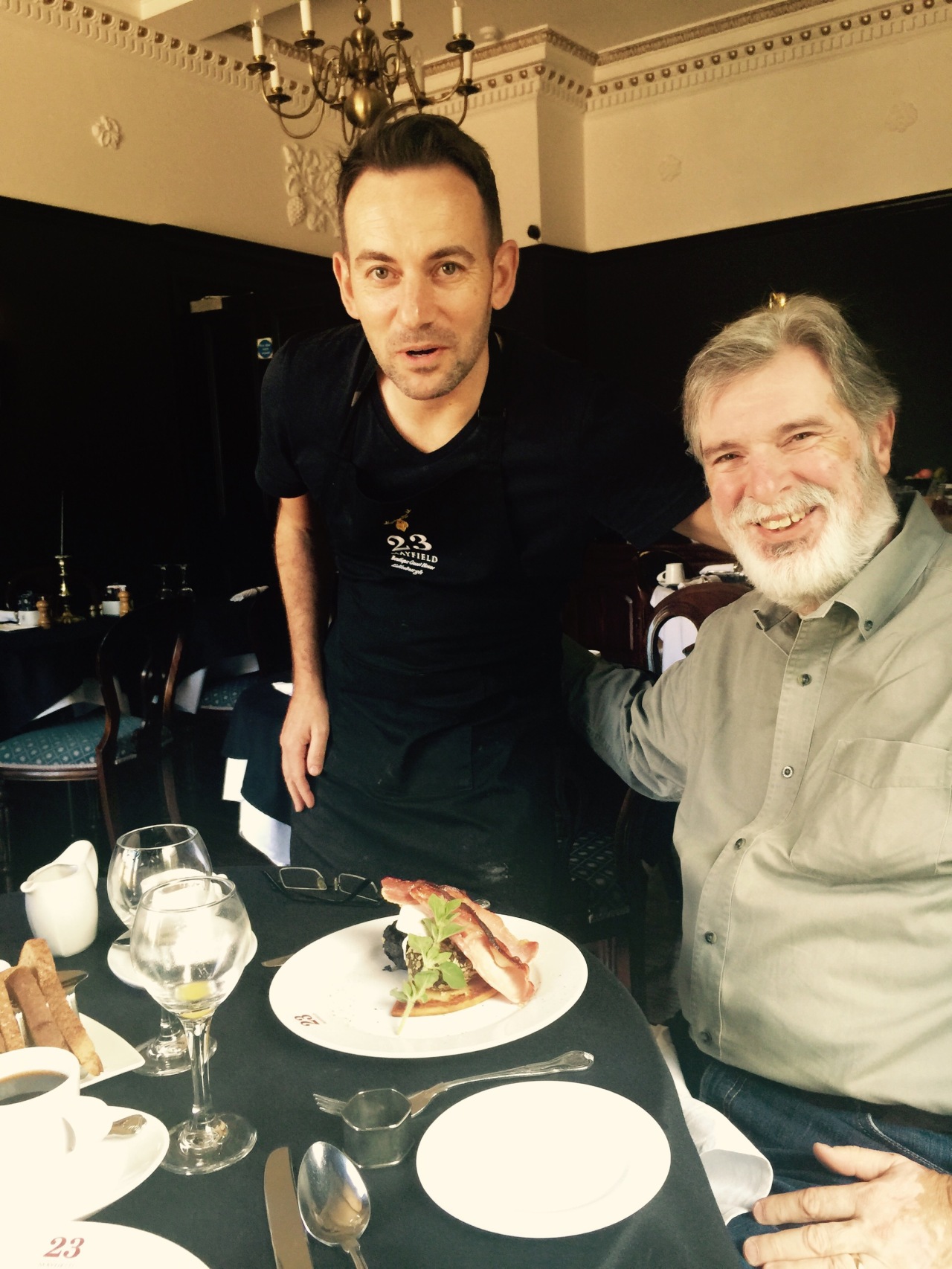 Above, you see Dan with Ross the proprietor and chef!  (Alex and Jen, Ross says hi, and when are you coming back for a visit!!!) What a feast… Yogurt with berries flambed in whisky and topped with roasted granola, Dan had oatmeal with the same topping with organic honey on the side… The main consisted of poached egg, roast tomato, Stornoway black pudding, Cambell’s Haggis, and organic bacon and sausage!  Fresh juices, minted water and an assortment of coffee and teas… Where was this when I needed it on the Camino???

After breakfast we walked up to the Royal Mile.  En route, dan decided it was time to tame his wiley hair and beard!!! 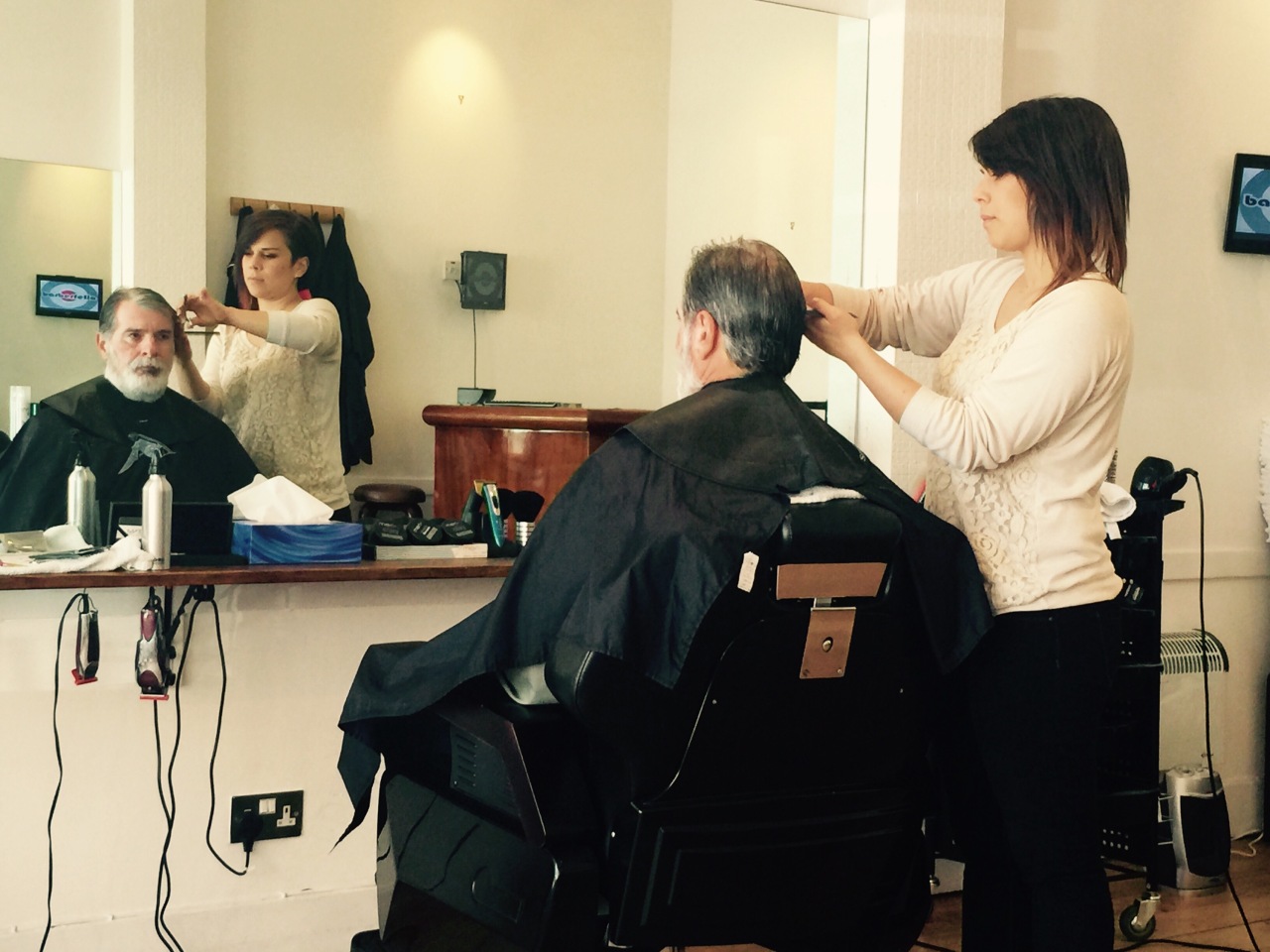 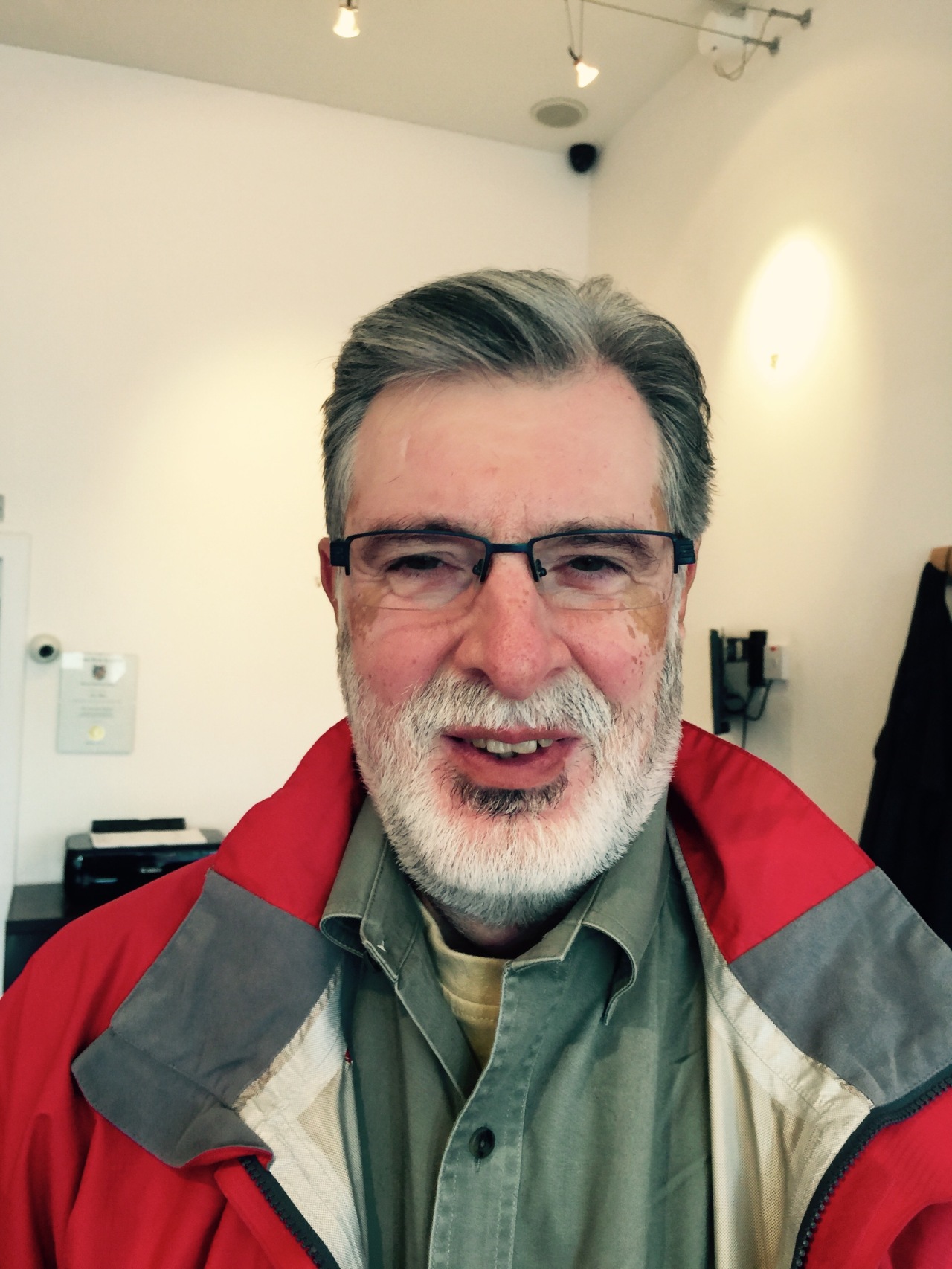 Now that he’s a proper gentleman, it’s time to visit the castle!  (Alan… It will be your turn soon!!)

On the way to the castle we passed a music shop near the university… Lisa, I found the perfect violin for you!!! 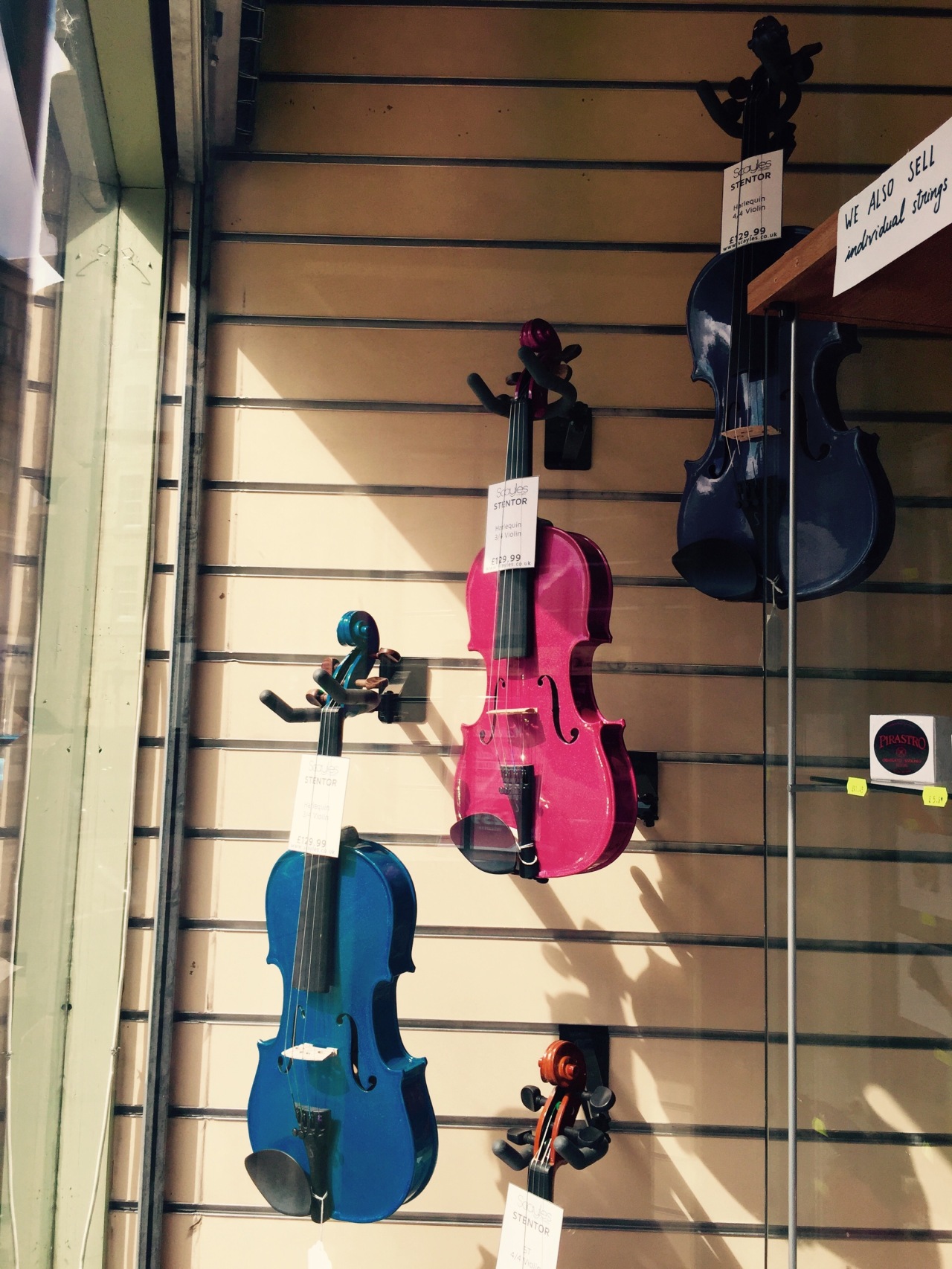 They match all your Camino outfits!!!

We marched forward and soon found ourselves at the castle!  The views from the “rock” are impressive ! 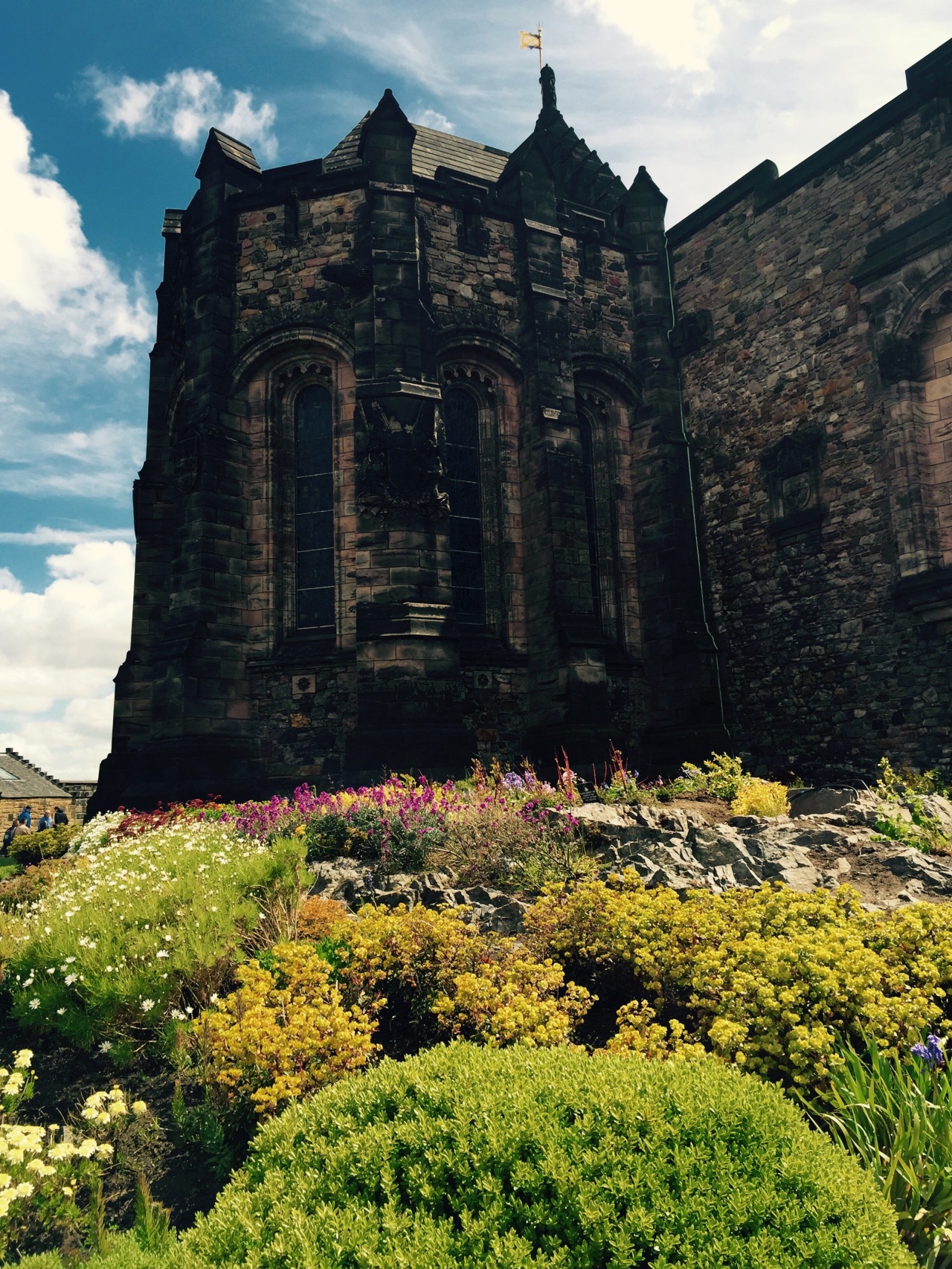 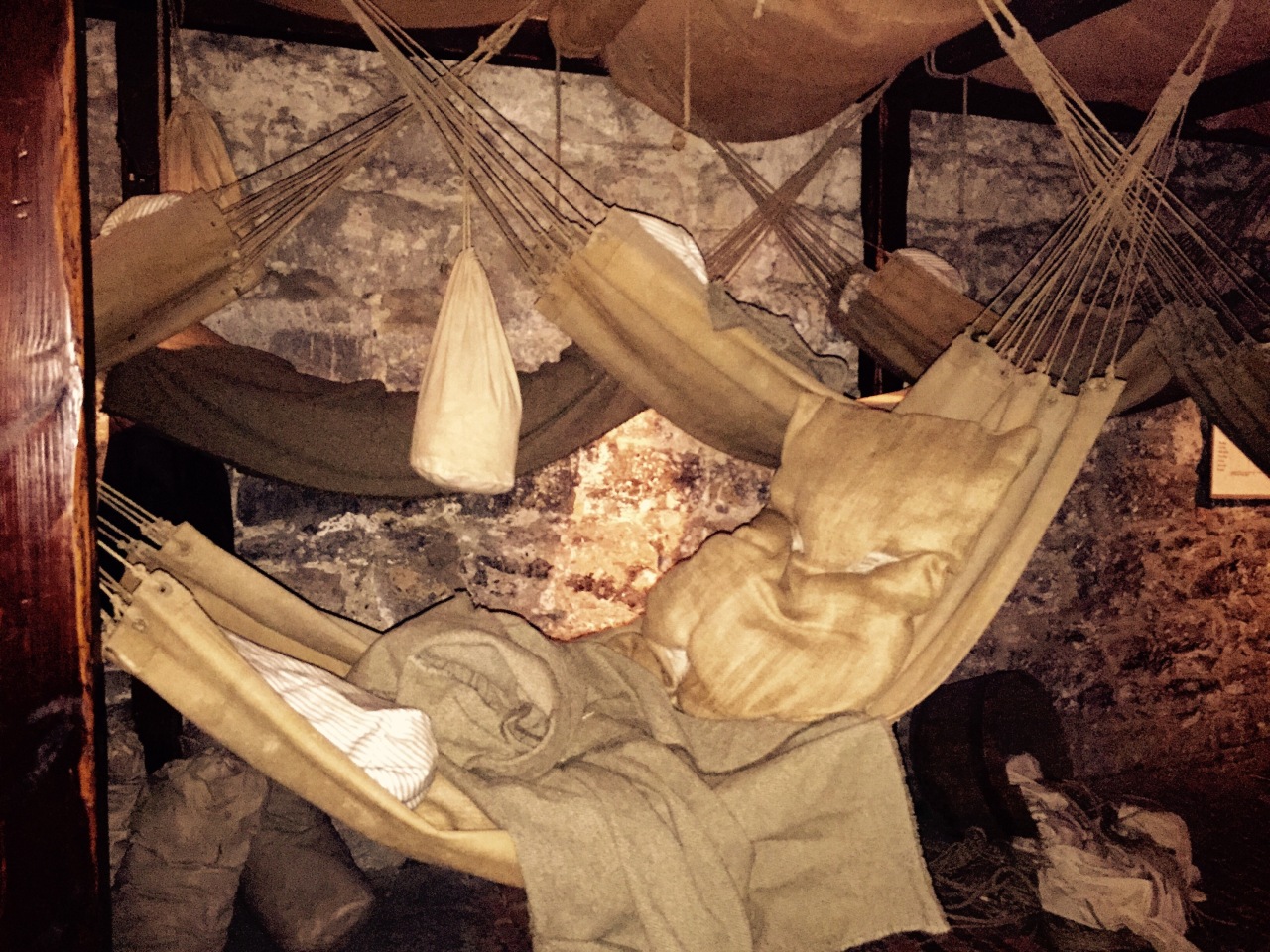 Our Albergue, or the prison in the castle… I’ll let you guess!

We toured through a variety of museums on the site, watched the 1 pm canon go off and then it was time to walk the Royal Mile…

We made some interesting stops including one at Cadenhead’s Whiskey Shop… Thinking we would stop in for some additional guidance as we tour the whiskey trail, we also discovered that our chances of getting cask strength whisky on the trail would be highly unlikely… Cadenhead’s on the other hand has been bottling whisky for over 150 years, and their senior director and buyer is one of the few people still buying casks of unblended, uncoloured, and otherwise undisturbed whiskies… I must admit, we did pick up a special bottle there!!!

Then onto Canongate church, which was originally affiliated with the Abbey at Holyrood Castle, then was rebuilt and converted to a Protestant church during the reformation… The entrance has a list of spiritual leaders from 1129!!! Pretty impressive history, and yet a very humble church… It has the most amazing memorial chapel we’ve seen, with a pervasive theme of peace… Just lovely!

Then onto the new Scottish parliament building… Well, actually we were frozen with the wind and intermittent rain ( the Scots apparently call this sunshine!!!) so we decided to pop into what I thought would just be the gift shop… We were instructed to go through a different door, and low and behold we were going through what I can only describe as airport security!!!  Of course, I got pulled aside as the X-ray divulged the Swiss Army knife I had in my purse! (Well, you never know when you need to defend yourselves from terrorists!!!) I thought I was going to get kicked out, but the very polite and patient (definitely not airport security) officer simply gave me a receipt for my knife and told me I could pick up at the exit (you got it, the one I tried to break into when I first tried to enter!)

The building itself was quite fascinating … I have never seen a design like it… It’s no wonder it overran it’s construction budget tenfold!  Also, it was warm, out of the wind, and had some of the most modern, cleanest washrooms I’ve seen!!! Mission accomplished, it was time to retrieve my knife and head back to our B and B… Our host promised us a complimentary drink, and it was that time of day… For a wee dram!  Off we went!  With a lovely lounge like this, one would wonder why we would venture out at all!!! 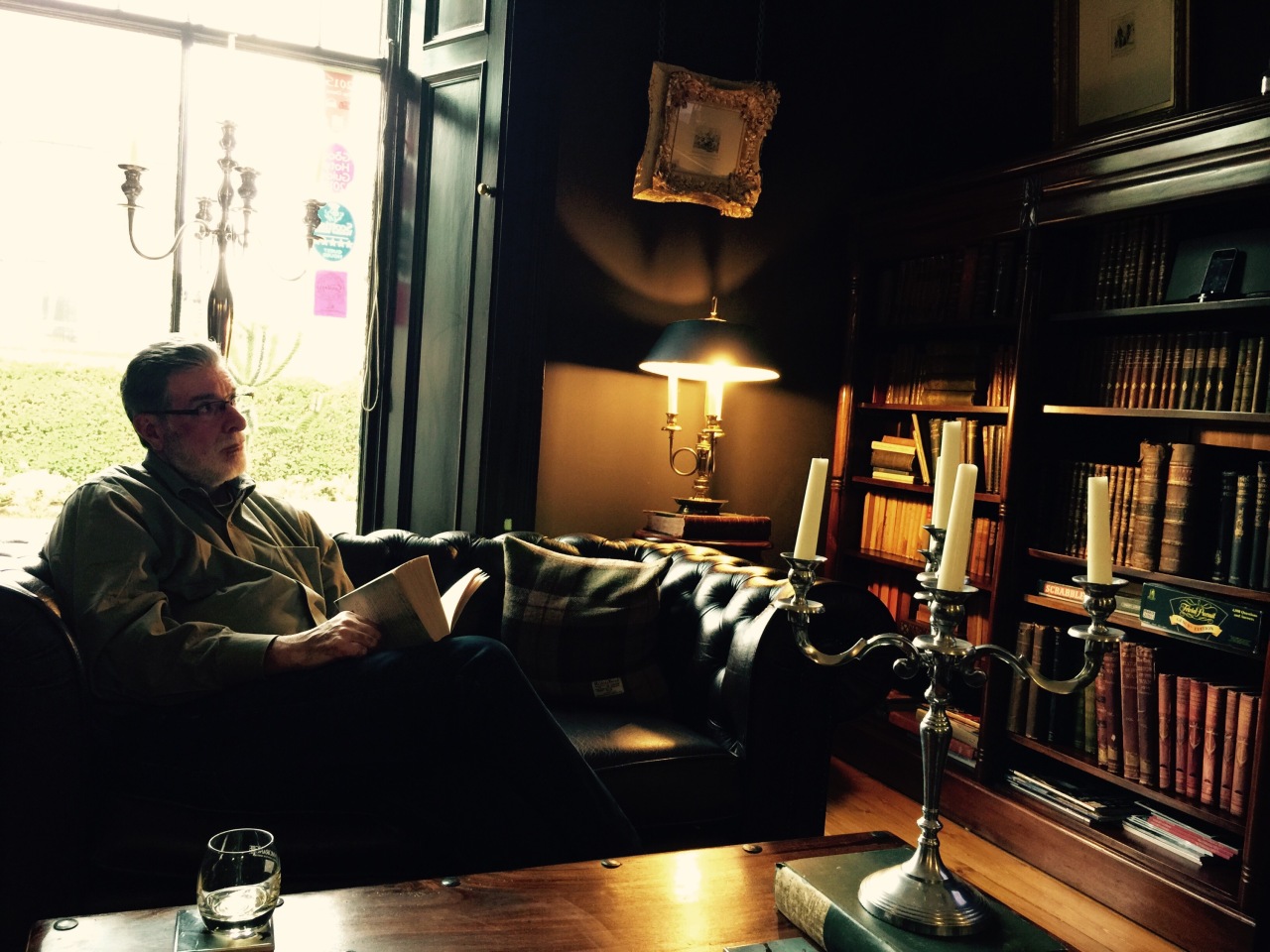 In the meantime, Alan and Lisa have walked another 32 km to reach Finesterre!!!! Congratulations!!! Their plan for tonight is to walk another 3 km to the cape where the tradition is to burn something they have carried, and then they’ll walk the 3 km back to their Albergue!!!  Tomorrow they will walk on the Muxia ( the place where the coffin of St James landed)… They have done a tremendous job!!!! Again, our hearts are with them as they celebrate and absorb this momentous accomplishment!!! 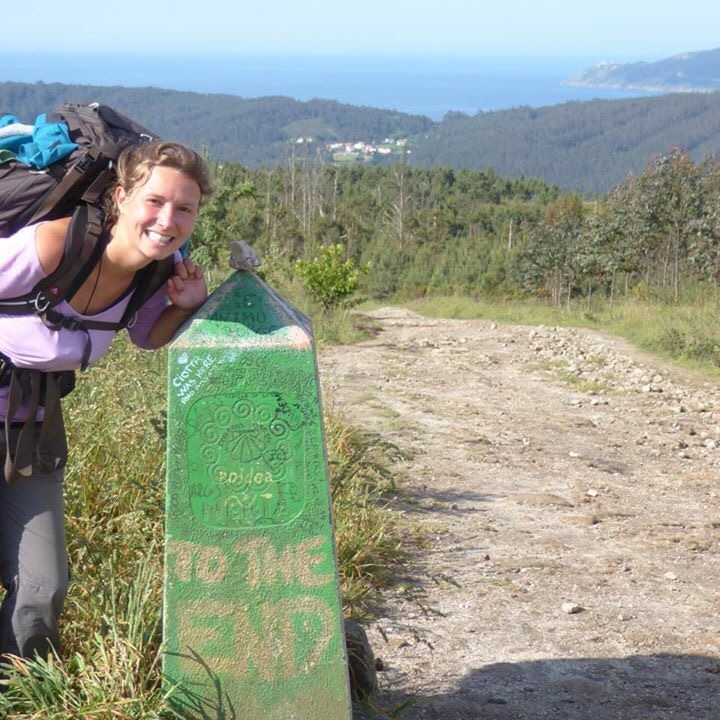 Having heard the news from Alan and Lisa, we decided to go out to celebrate!  We went to a restaurant called the Apiary, as recommended by Ross… Certainly NOT disappointed!  We had a dinner for two called the big (and happy!!) cow… Just amazing! 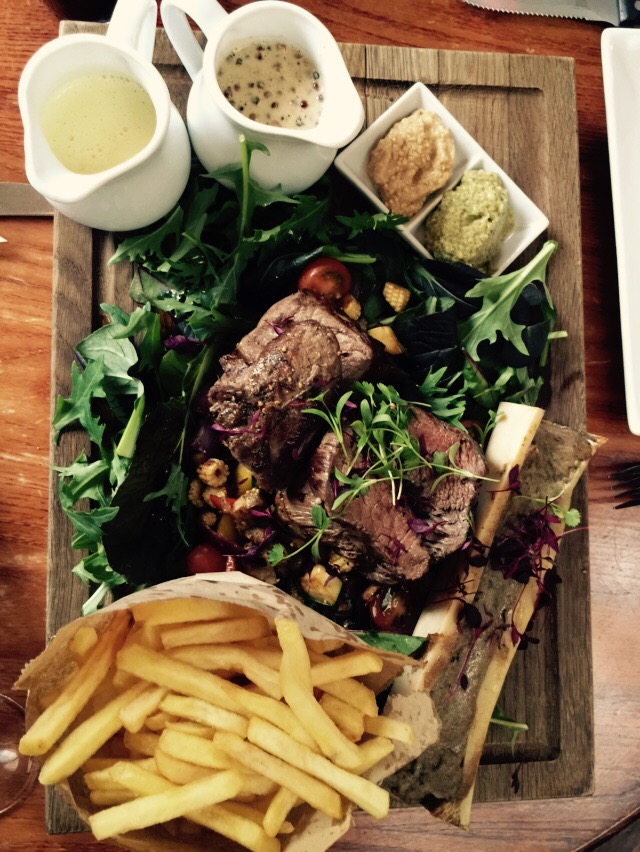 Good thing we had a long walk back to the “Albergue”! (Well, not really… But it makes for a good story!!) Needless  to say after walking the town today, and eating a big meal we are ready to say goodnight!

And a special goodnight to Alan and Lisa!!!  Our Camino champions!!!