Today was another early start. Breakfast was at 6:30 and we departed the hotel at 7:00 am for the journey to the airport. It was bitter sweet as the exhausted “family” gathered for one last meal together before heading out on our separate ways.

Our route took us across the island. Up in the highlands we saw many farms with a variety of animals and produce. All very small and all trying to eke out a small patch of fertile ground in which to plant, or allow livestock to graze. Doing all this and adapting to co-habitating with land tortoises who are very slow but destructive with crops!

Along the way we saw a number of places where imported species like hydrangea, lantana, and impatient plants were striking out on their own and invading roadsides and fields where they live in abundance with no natural predators, and no worry about frost! It was interesting to learn that the bees and birds of the Galápagos Islands prefer white or yellow plants and would not pollinate other more colourful sorts. That’s why it is easy to tell which plants are endemic and which have been introduced. Again, the protection of endemic species is paramount with the Charles Darwin Centre growing many endemic species to give to people to plant, and encourage them to dig up and get rid of the introduced species. I imagine that will take many years to convert, but the efforts are being made nonetheless.

Once we summited the island we drove down again to the northern coast where we boarded a ferry to take us to Baltra Island where the airport is. The ferries are quite unique with the roof of the ferry being more or less level with the pier, thus making it easy to load the luggage.

While the luggage stayed on the roof, we all went to the lower deck and sat on a bench, donned our life jackets and waited for our departure. Well, all but one of us sat on a bench…she was lucky and was able to stretch on a hammock that was stung down the centre! 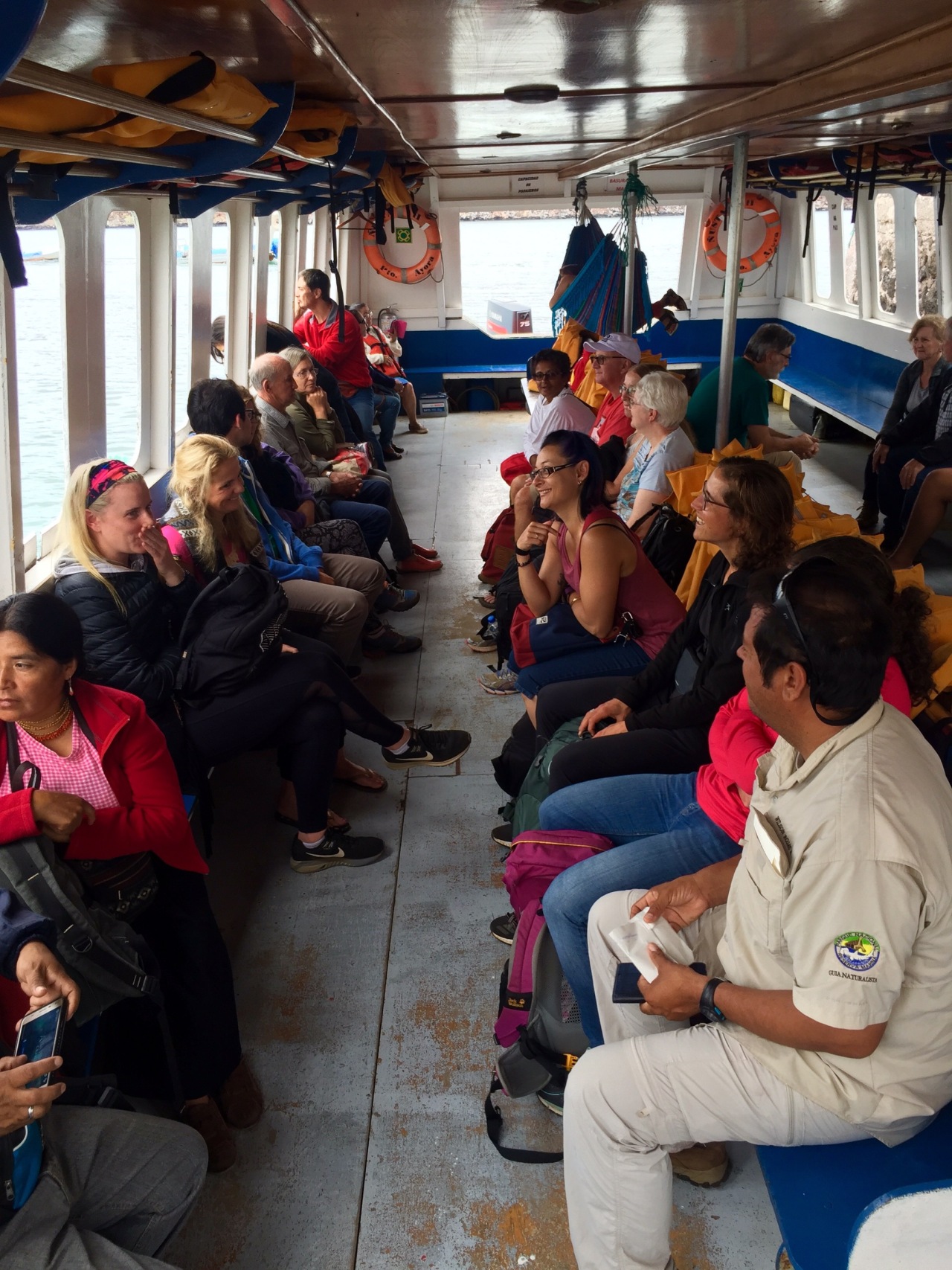 After waiting for a couple more groups to board, we were off on our 5 minute crossing. Once we arrived on Baltra, it was a free for all to get our luggage and get onto the bus. We were packed on cheek to jewel, but the ride was fairly short to the airport proper. As we drove along we could see the remains of the airbase that occupied this barren land in the mid 1940’s. Other than the airstrip all that remained were concrete pads where buildings once stood. The Galapagonians, being quite resourceful, gather any and all building material that could be disassembled and took to other islands to build homes etc. Recycling was popular on the islands even then!

We’d arrived at the airport and began our check in process. It was here that we learned that our flight had been delayed 2.5 hours. Apparently the president of Chile is coming to visit, and they have cleared airspace for his journey… oh well, the first of any delays that we have experience…not bad at all. And the good news is that it gives me a chance to get my blog well underway while waiting! Also, as Wilson put it, we have another 2 ½ hours in the Galapagos.

We all bid farewell to Wilson, and saw him go off to his bus for the return trip to the Santa Cruz harbor and then water taxi to his home island of San Cristobal, about 2 hours sail. He was a wonderful guide and became a friend to us all. We only hope we have guide as caring and knowledgeable as him on our future tours!

Like most airports, this one was chock a block full of souvenir shops. A reasonable sized lounge at least let us stretch our legs a bit for a walk.

Finally our plane arrived, and we had a safe and uneventful flight back to Quito via Quayaquil. By the time we got to our hotel it was around 6:30… check in, and then out for a quick dinner by 7! We went back to a lovely restaurant that we had been on our previous stay and enjoyed our last dinner in Quito. As we strolled back to our hotel we saw the winged madonna once again watching over the city!