We woke up bright and early today. Birds were singing, the sun was out and very little breeze! We’re we still in Patagonia? Even my leg felt better with a day’s rest!

We both got up and headed over to the dining tent for breakfast. The cooks made us bacon and eggs, toast; we had oatmeal available and yogurt, and French Press coffee! Dan and I were able to eat enough to fuel us for the trek, and we both felt up to it even though it would be our most strenuous yet! (Our one consolation was that we would be doing it with oxygen levels that we were used to, and not having to also cope with ultra high altitude!

Our walk started slow and steady, with about 1-2 km of very flat paths at the beginning. We crossed our first bridge and learned the “bridge etiquette” of no more than 1 to two persons on the bridge at a time. As we move on through our trek, you’ll understand why! 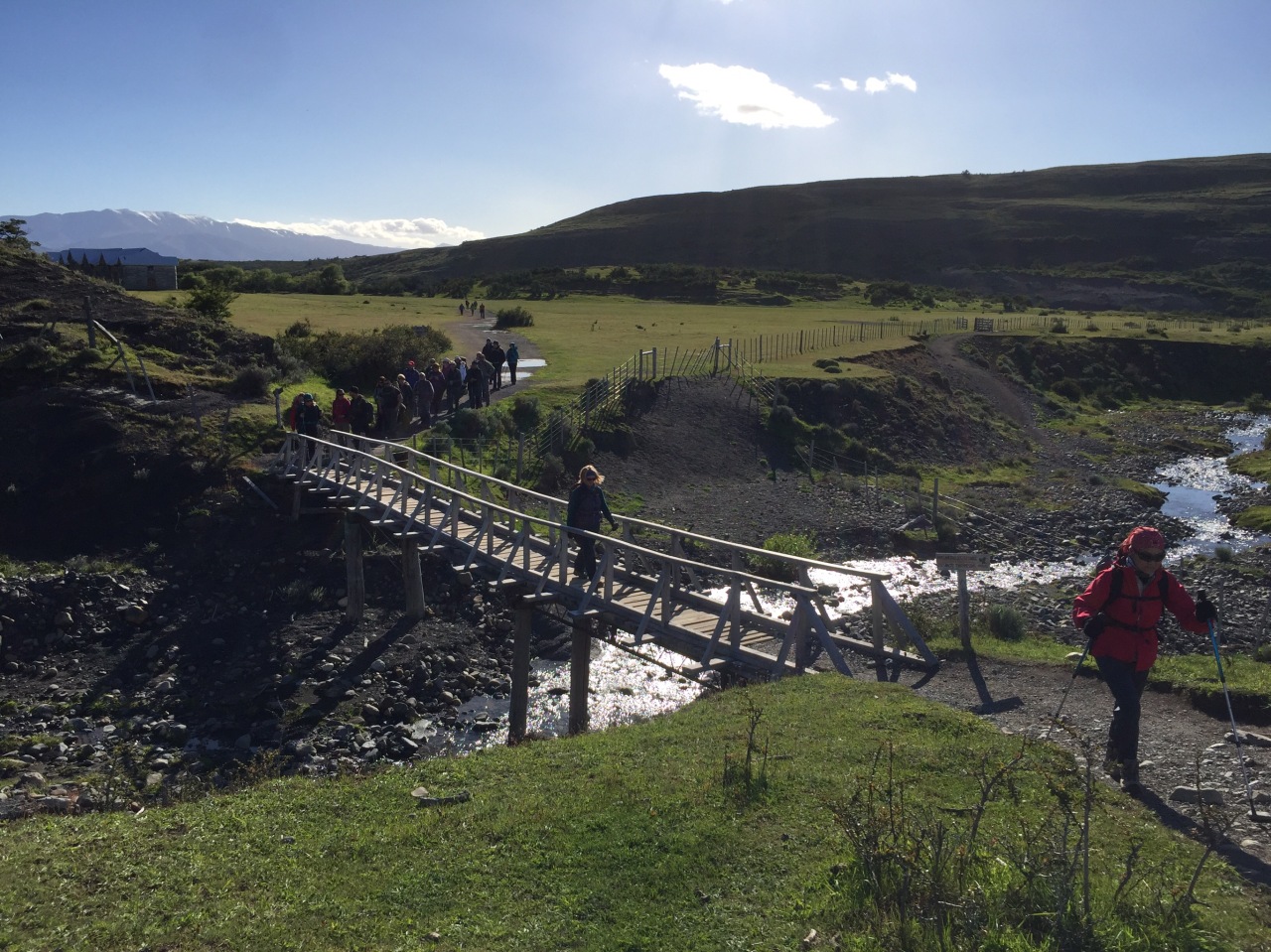 The mountainsides here were covered in fire bush all out in full bloom. Almost looked like someone was trying to decorate for Christmas!

Then we started to ascend. And of course, we took a fair number of breaks! 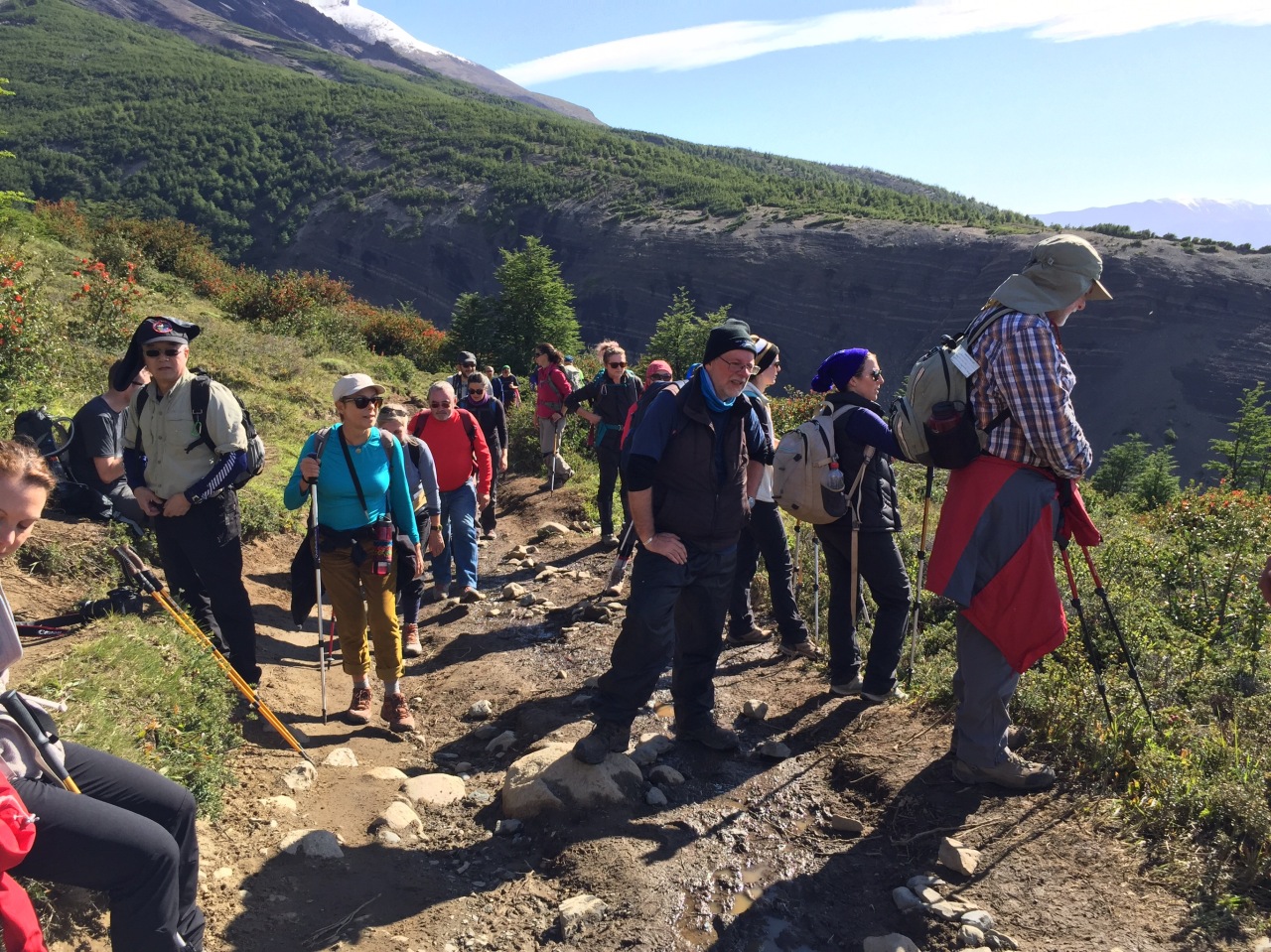 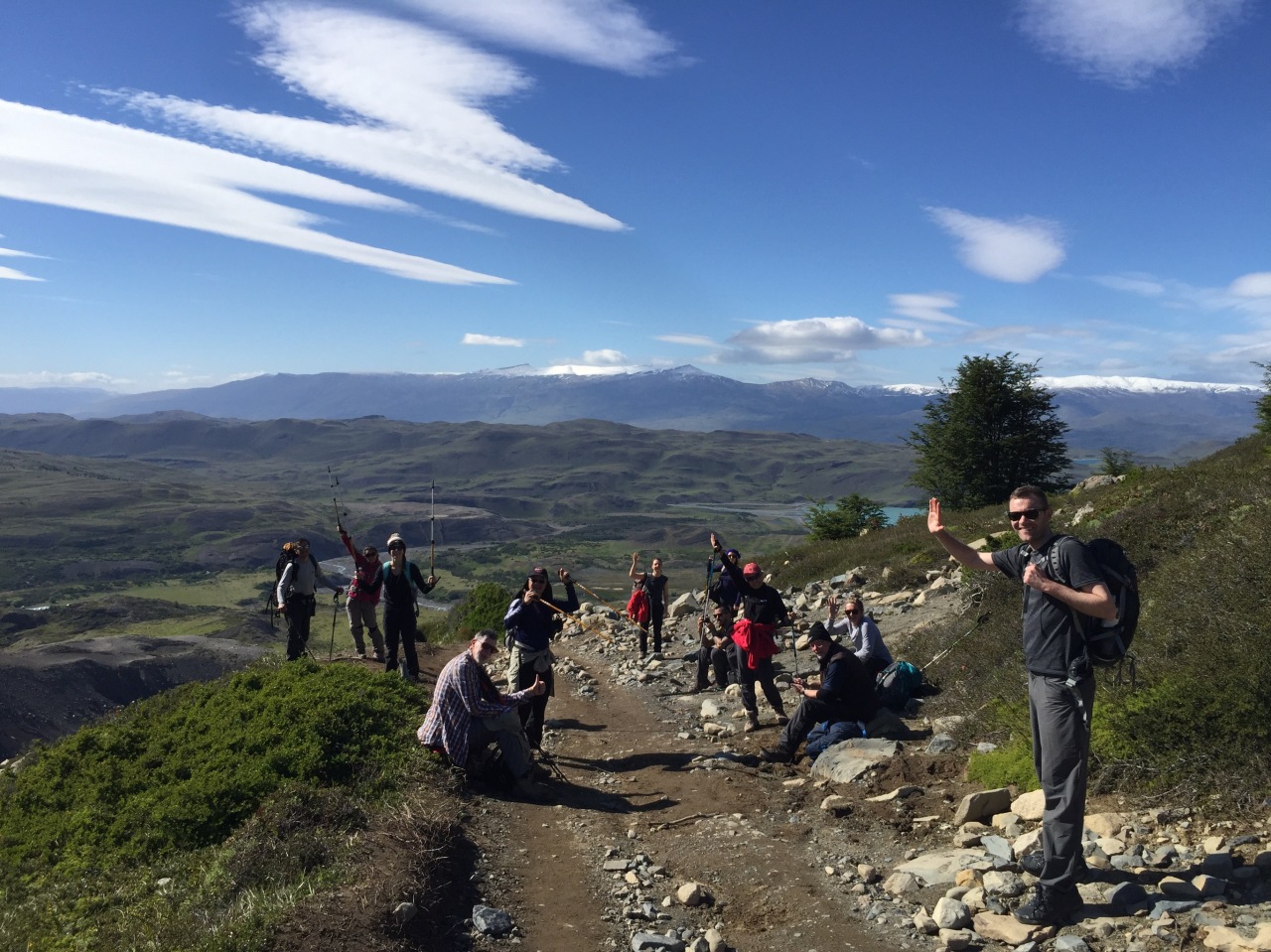 The views just got better and better, and we hadn’t even hit the half way mark!

We saw, and crossed many glacial rivers.

And as you can see, and bridges became ever more precarious! 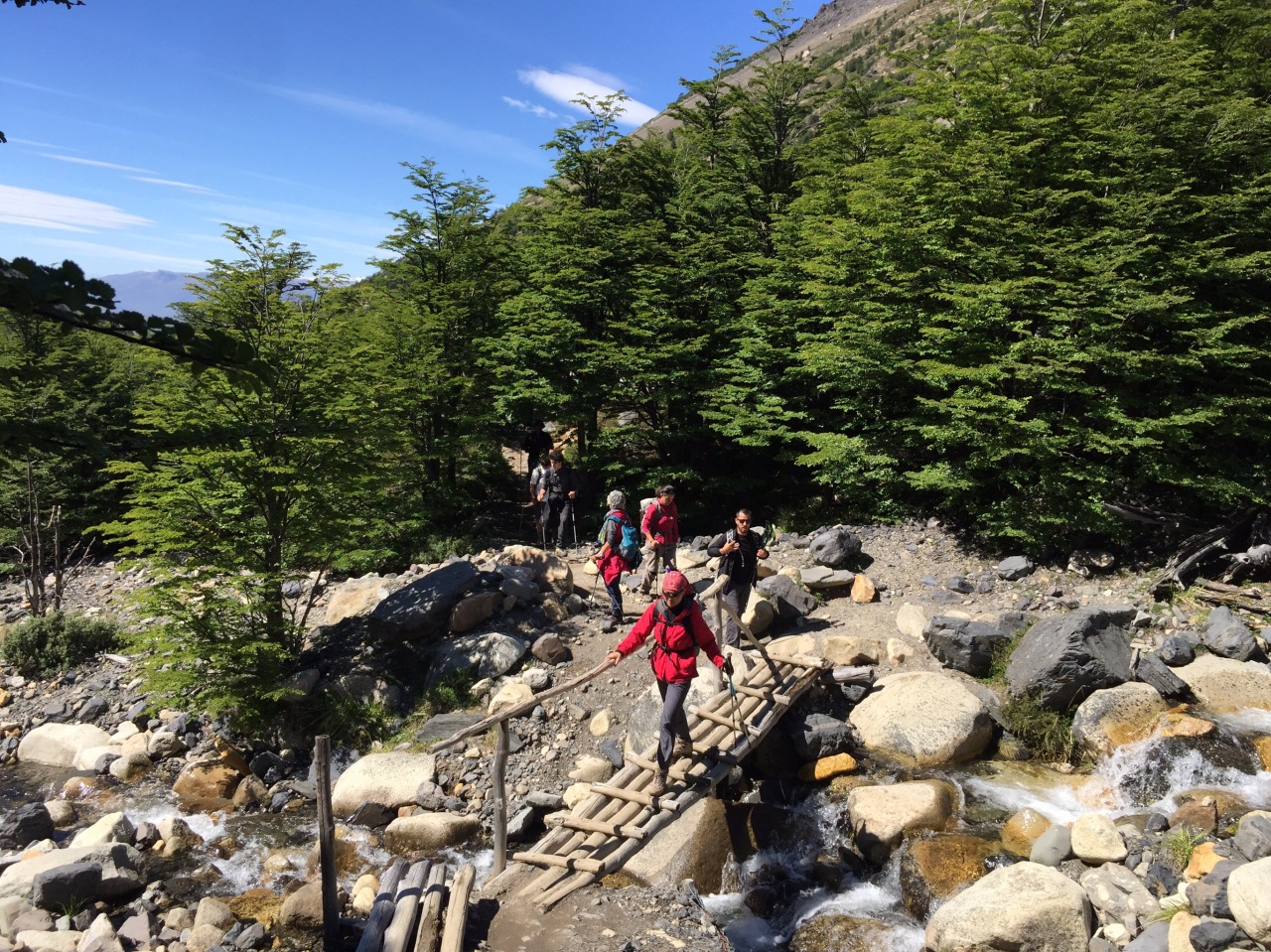 We even hiked through some old growth forest, and when we passed the oldest tree, we all gave it a hug for energy and luck!

We stopped at the Chileno camp for a rest stop, before heading on to the steeper uphill climb. What a cool tent area for the hikers here!

Next we reached the point at which we would be climbing up the Morrain face to get to the outlook. We had already come over 10 km, so what’s one more 30% grade over the next km?? ( we are totally crazy!!!!)

It seemed like we would reach the lookout every time we arrived at another large boulder! And finally, we reached the correct larger boulder and and saw the amazing towers standing before us! 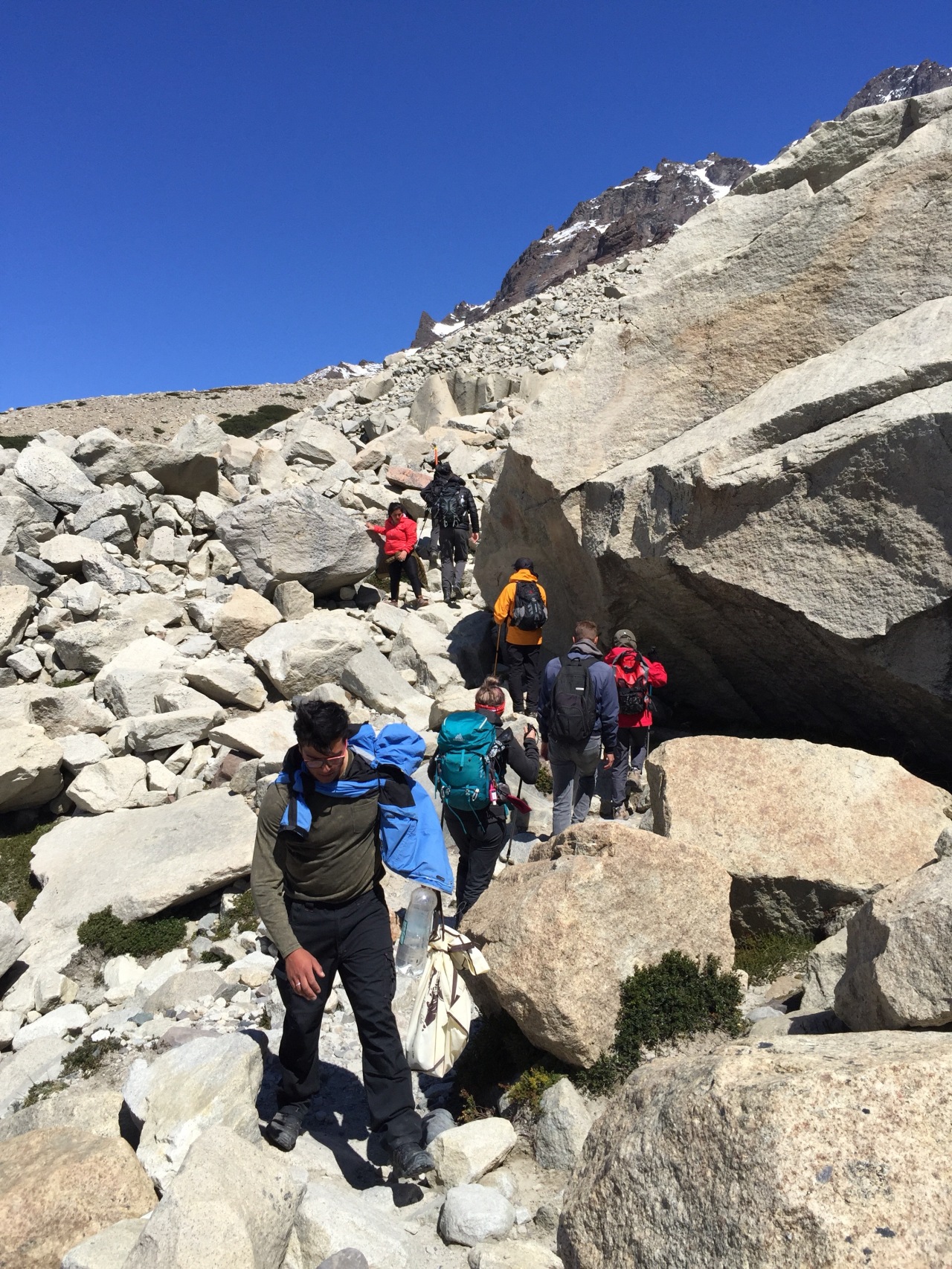 We savored our climb, took lots of pictures, and sat back and enjoyed a relaxing lunch with the most spectacular view yet!! Well worth the leg sacrifice to get to see this! 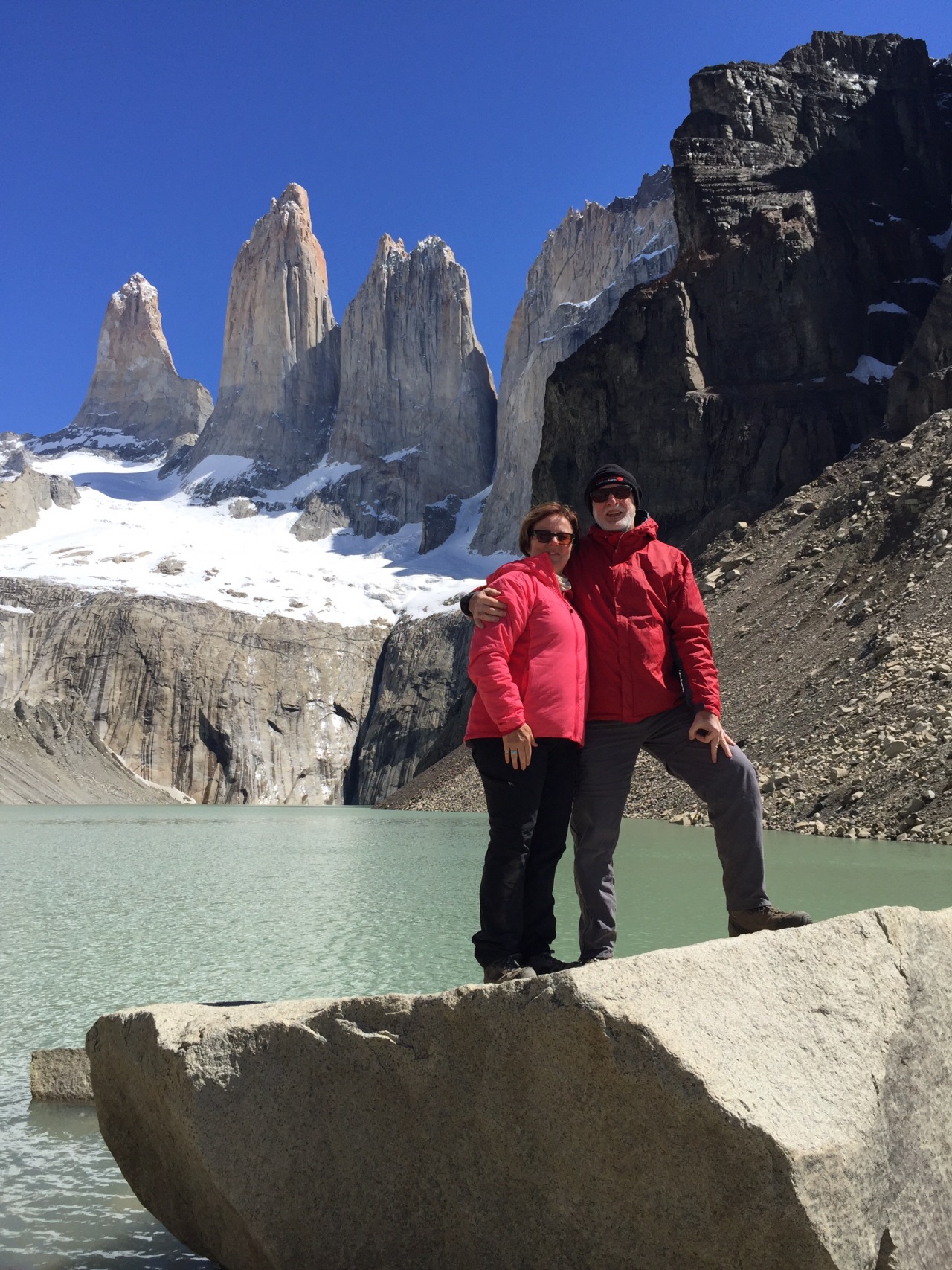 After about an hour or so, we had to tear ourselves away from this glorious place. The blue cloudless sky we were gifted with happens only about 5% of the time….the day before and the day after the climbers saw nothing but clouds for their view, with biting wind and rain accompanying this reward! We felt truly blessed!

Down we went, through the rocks and forest, over rivers and streams… the going was tough on our old knees, but the reward we had just experienced was soooo worth it! 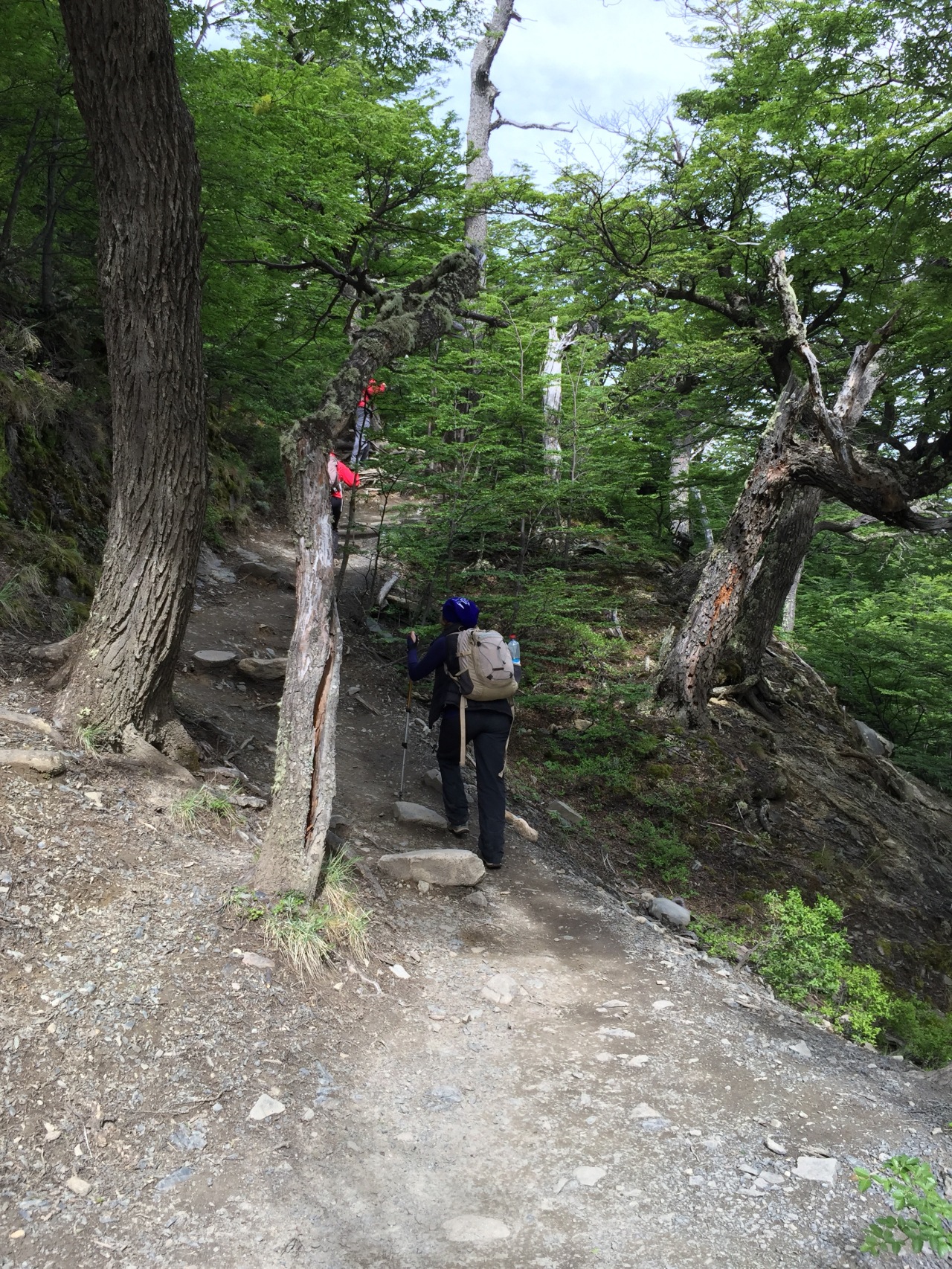 As we neared the bottom of the valley, Dan pointed out an incredible sedimentary hill that had been infused with igneous rock at most interesting angles! It’s hard to get a concept of height anywhere along here…suffice it to say that our efforts that day were the equivalent to climbing up and down 420 flights of stairs…and that only got us to the base of the Torres Del Paine! 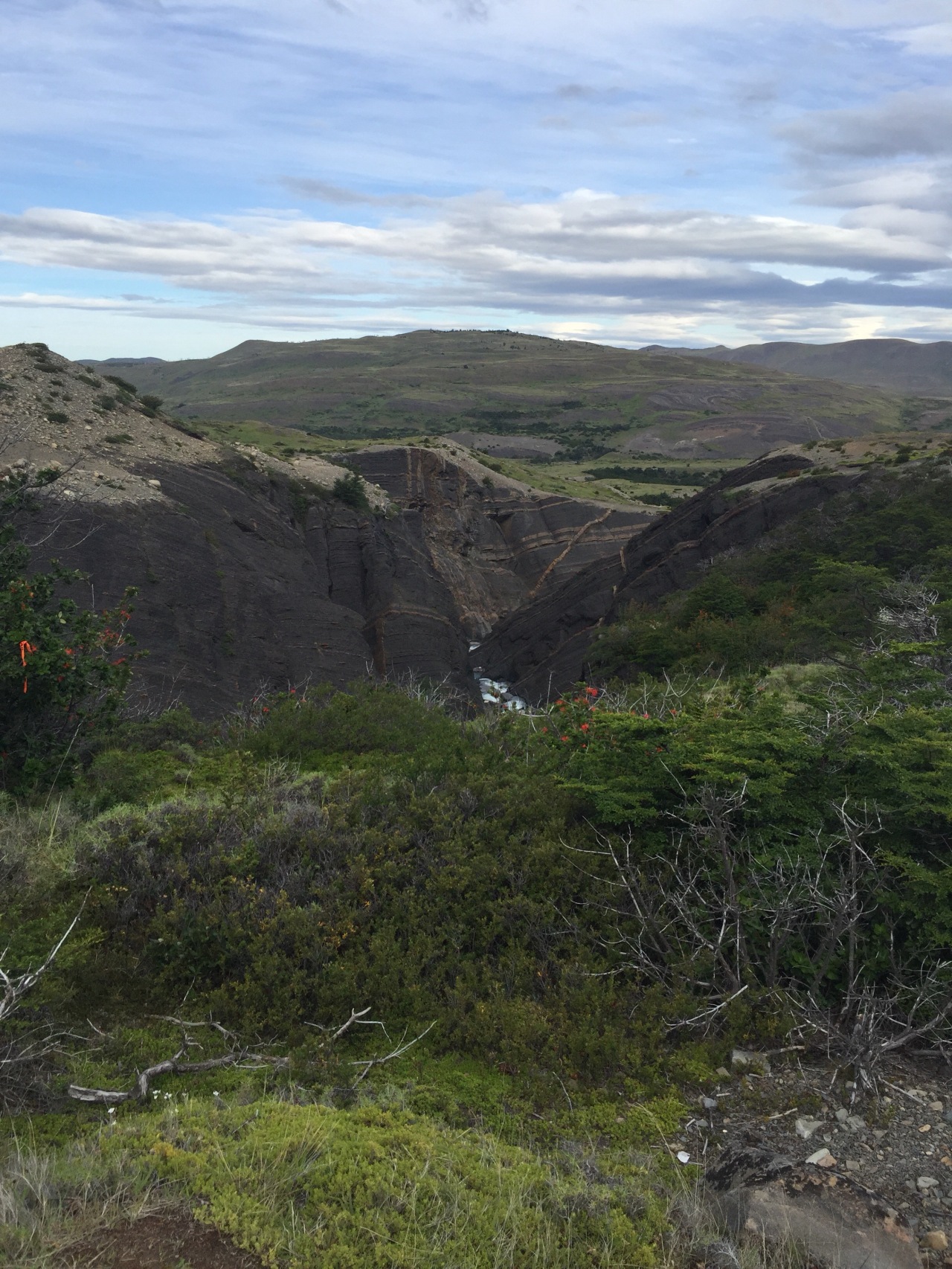 When we got back to camp, our cook’s met up ( as they were setting up someone else’s tents, and asked if we were ready for a cocktail! Little did we know that Pisco Sours with appetizers awaited us in the dining tent!

After a hearty supper complete with wine, we all headed to our beds for a good ( if not cold) night’s sleep! The night before it was 1 C and this night promised to be only slightly warmer…. Oh well…wear what you’ve got and tuck in for a refreshing night’s sleep! Talk to you in the morning!