Our day started with a 7:30 pick-up by our guide, Ricardo.  We were in the park and advancing along the Upper Circuit by 8 am! ( the red line).   We would take the train to the “Devil’s Throat” after we did the walk…as it turned out everyone who had entered the park at 8 were heading for the train, and we had our Upper circuit pretty much to ourselves! 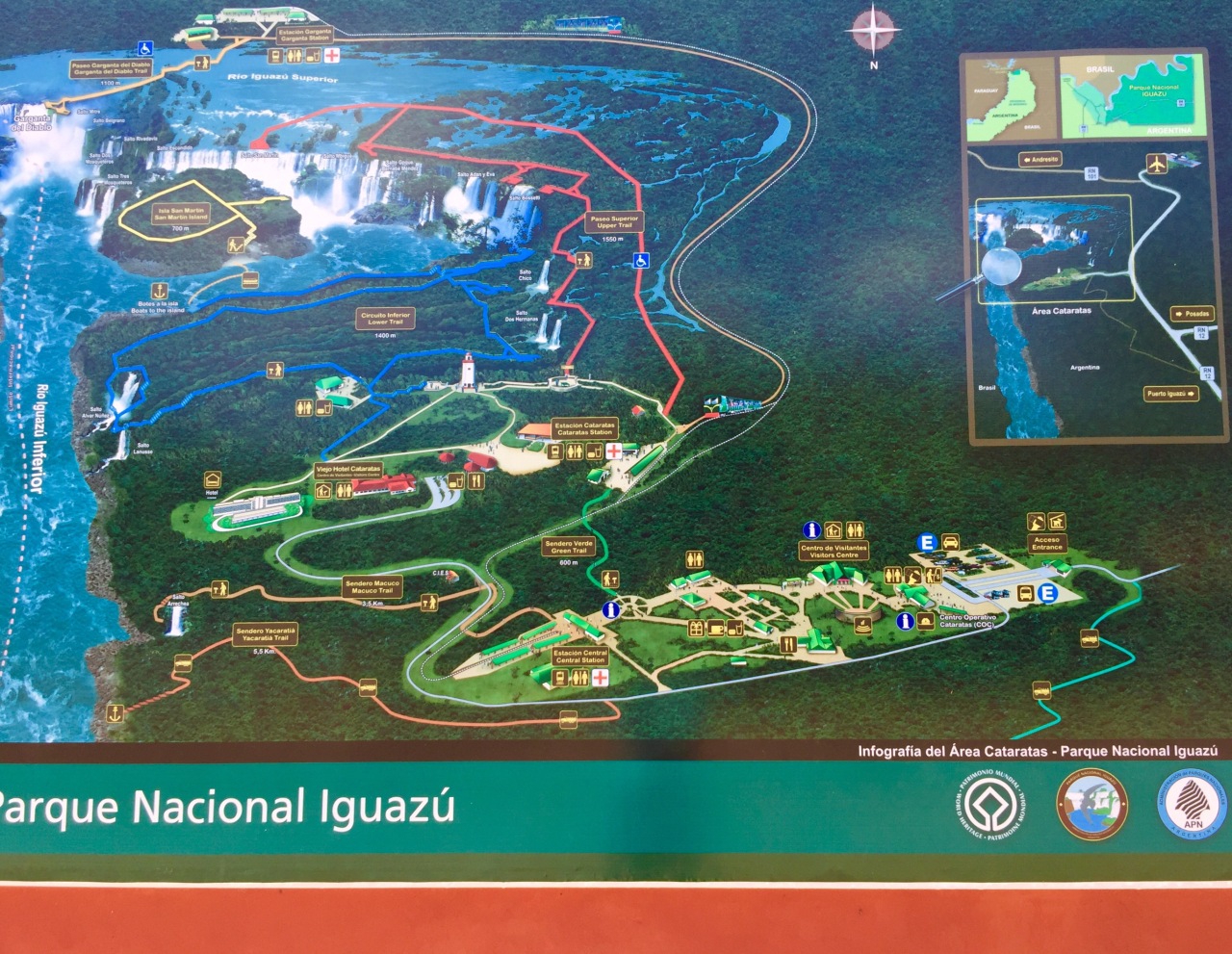 Our first view of the Falls was Spectacular!  And the views just got better from there!  And the sound, oh, the sound!

​​
Ricardo told us that the color of the water was typically green, however, because of significant rainfall, the flood waters were churning up the silt and making the water a muddy red.  This significant amount of rainfall also led to some pretty spectacular volumes of water over the falls, which ranges from 175 to 250 water falls in total depending on the water levels. 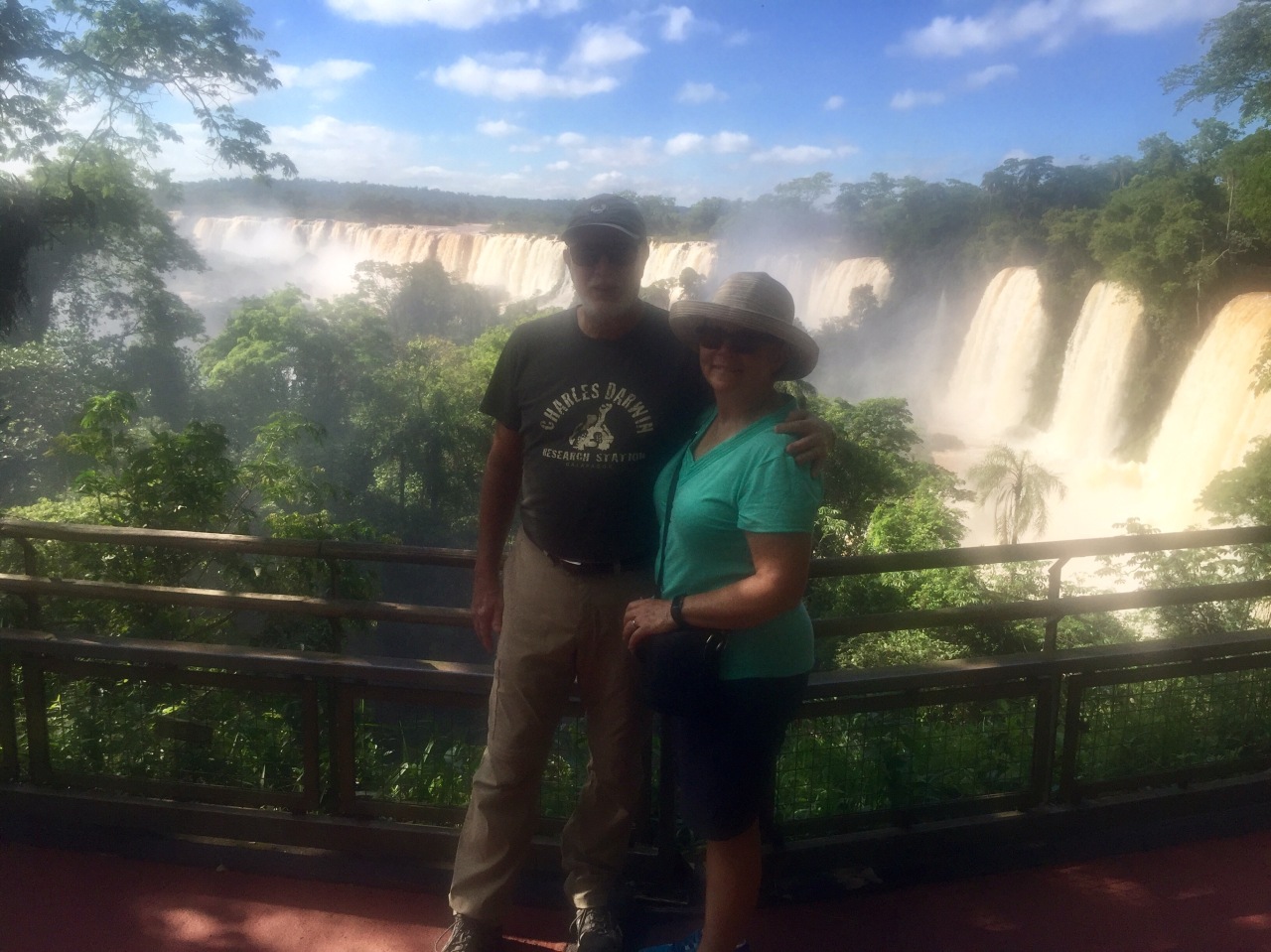 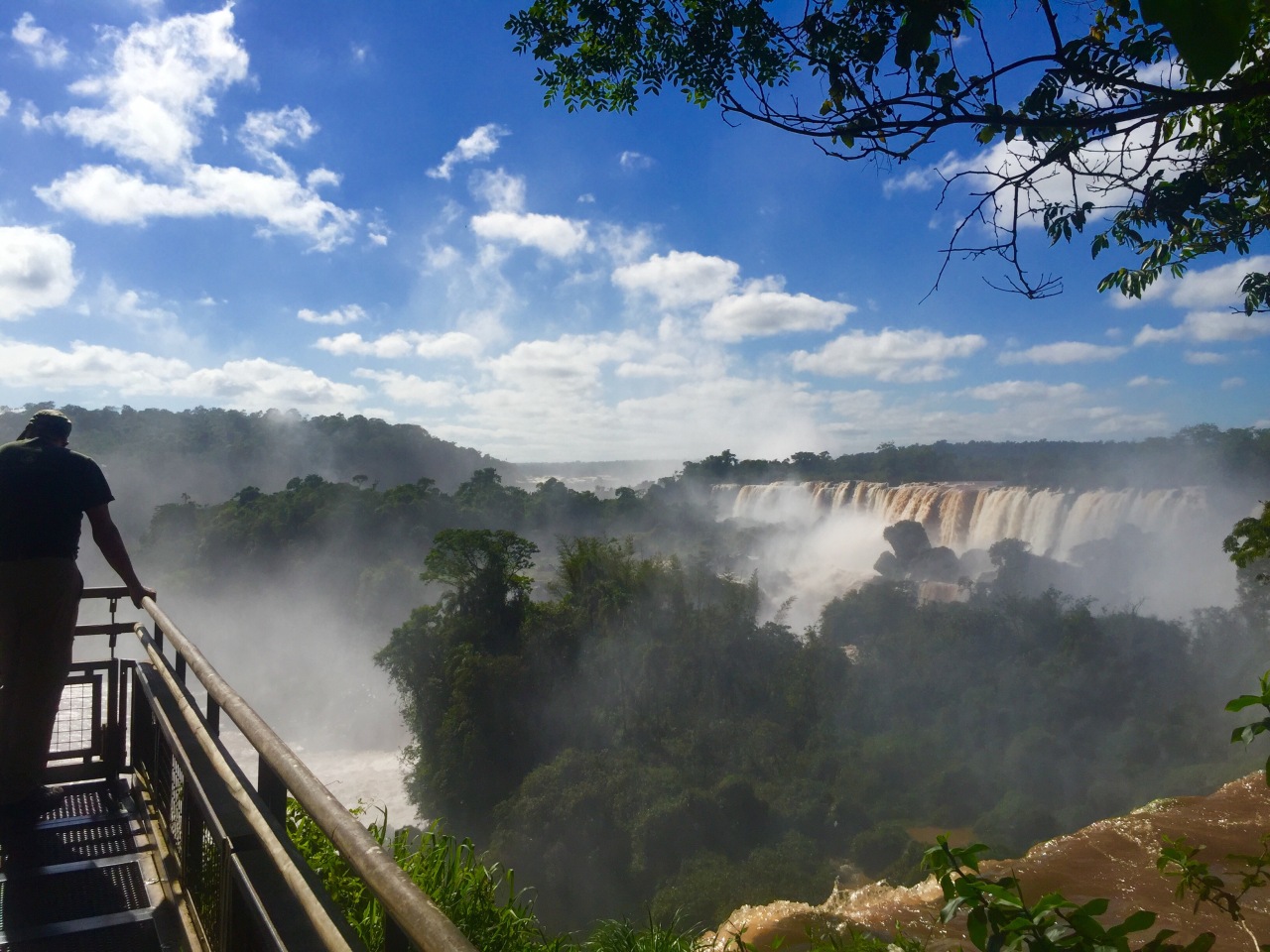 We noticed several birds (swifts I believe) flying into the falls…they apparently nest behind the falls!  How they don’t get swept to their deaths with every dive, I’ll never know!

The network of paths was fascinating that took us through this upper adventure.  Mostly steel bridging, some of the expanses were quite long! 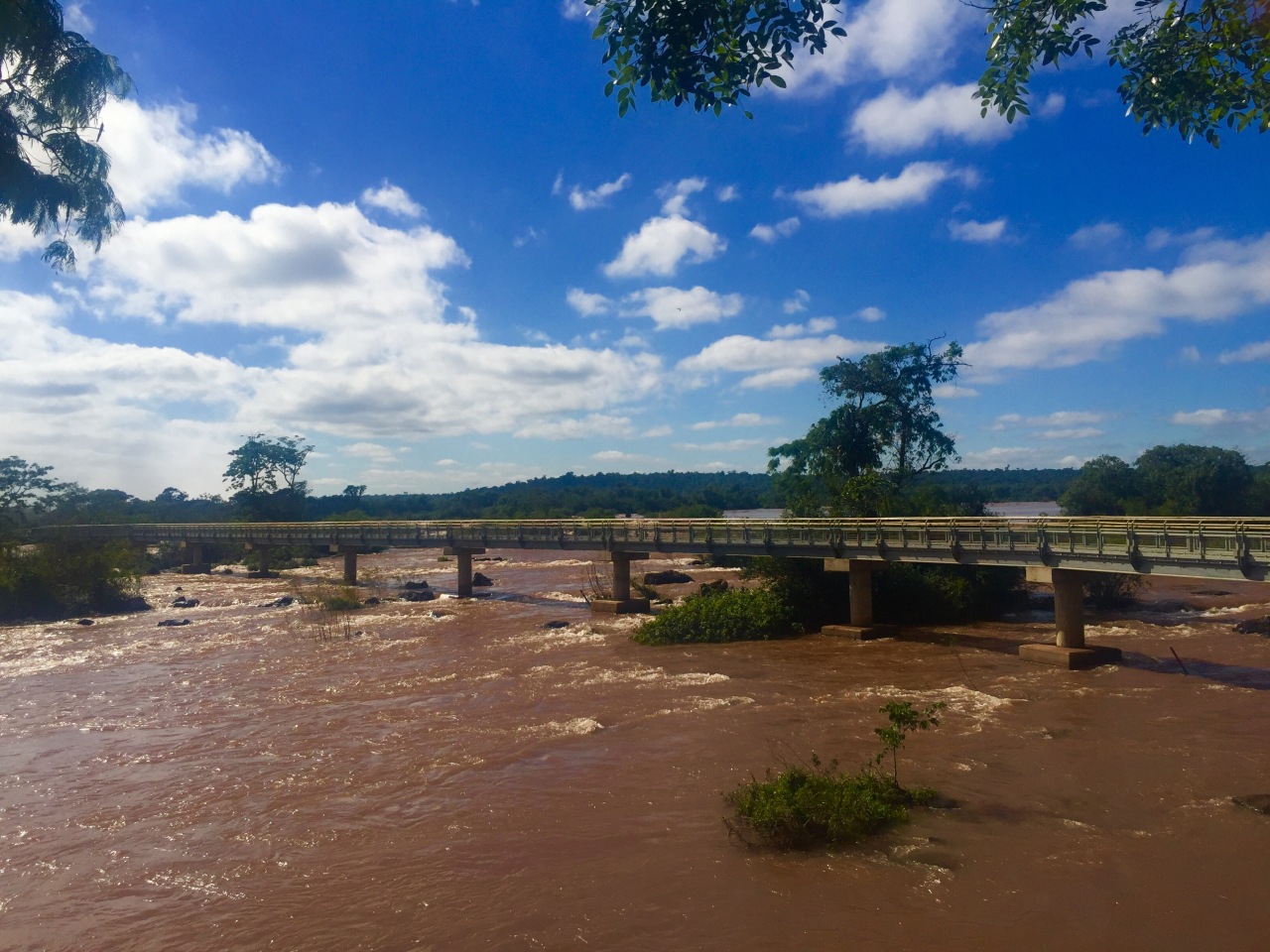 Oh yes, and always traveling over very swift water.  While the upper part of the Iguazú river was not deep (about a metre on average), the lower depth was deep enough for dare devein boat tours ( more to come on that!). We also some some very interesting birds and animals on our walk…this yellow crested jay was a frequent companion! 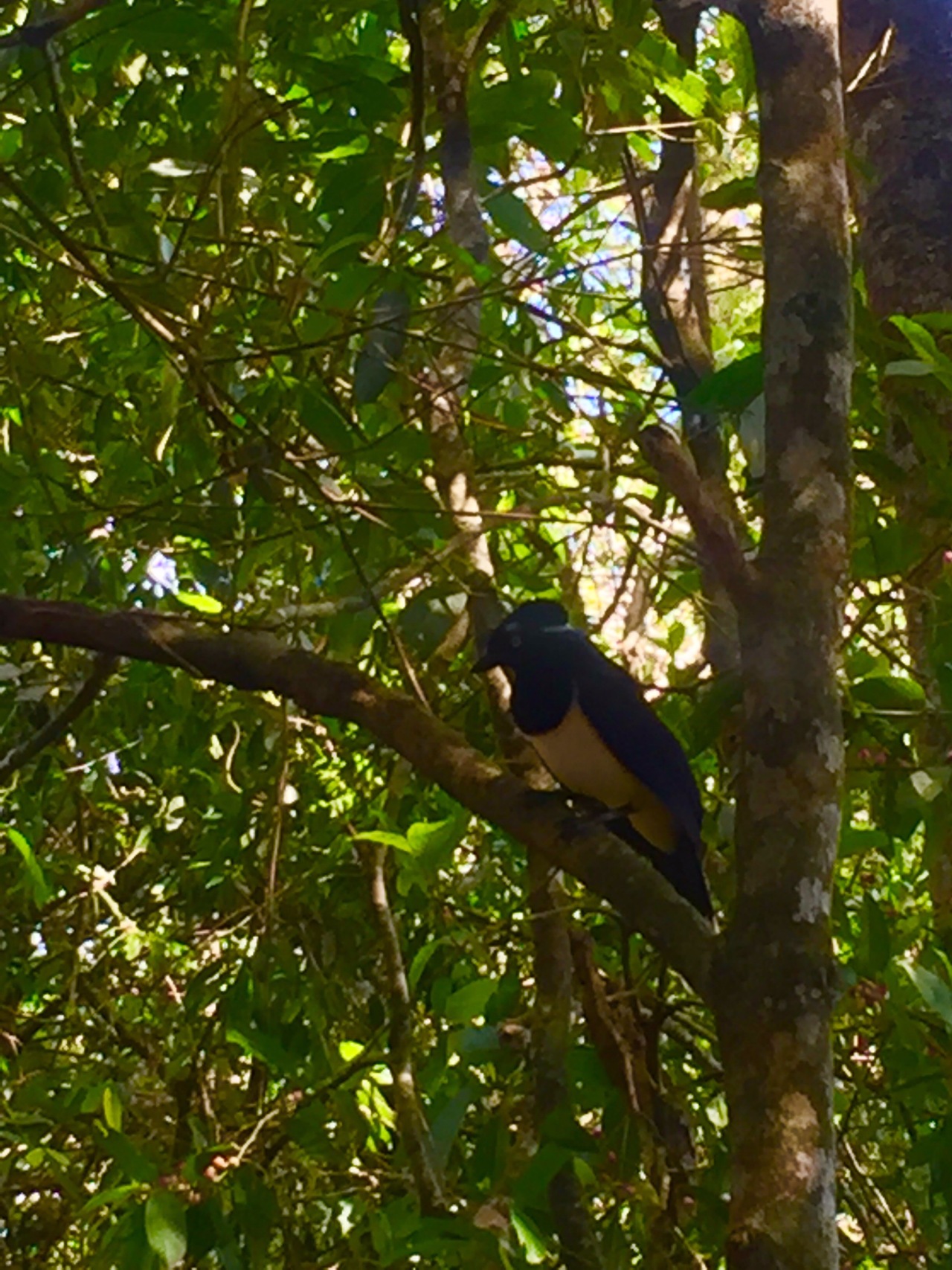 We also saw plenty of butterflies, coati and I even saw a young python in a tree!

When we returned from the Upper Trail, we headed to the train for the ride to the access point from the “Devil’s Throat”, which is the large horseshoe falls on the Brazilian side of the expanse.

When we arrived at the station, we then took the series of bridges to the look out, and were surrounded by sound, mist and sheer power! (Check out the swifts that are flying in and out of the falls!! 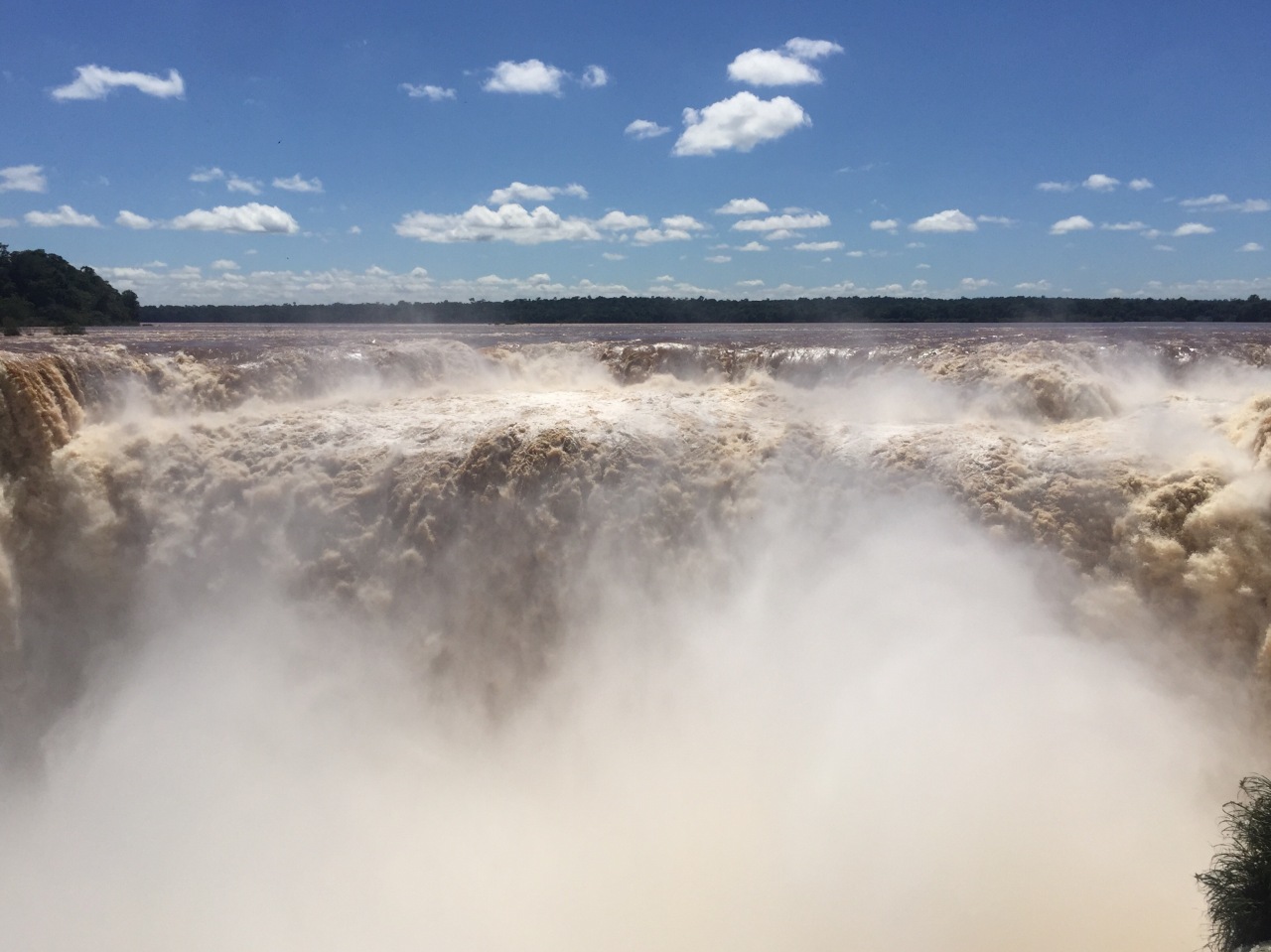 ​​
When we returned on the train, our last trail was the “Lower Circuit”. There were some amazing vistas from this angle as well!

And oh, those crazy boats!  See a few boats getting ready to shoot into the falls below!

…and can you pick out the boast in the mist…mid run??

We were even blessed with a double rainbow at the last falls, Alvaro Nunez (discoverer of the falls in the 1500’s)

A spectacular day all round!  Perfect weather ( around 28-30C) a slight breeze to keep us cool, and absolutely NO bugs!

It was time for a quick bite of lunch and then to head to the airport for our return to Buenos Aires.  Out flight was a little late, but we made it back before 6, battled rush hour traffic and changed hotels…and settled into a spectacular boutique hotel for our last couple of nights! 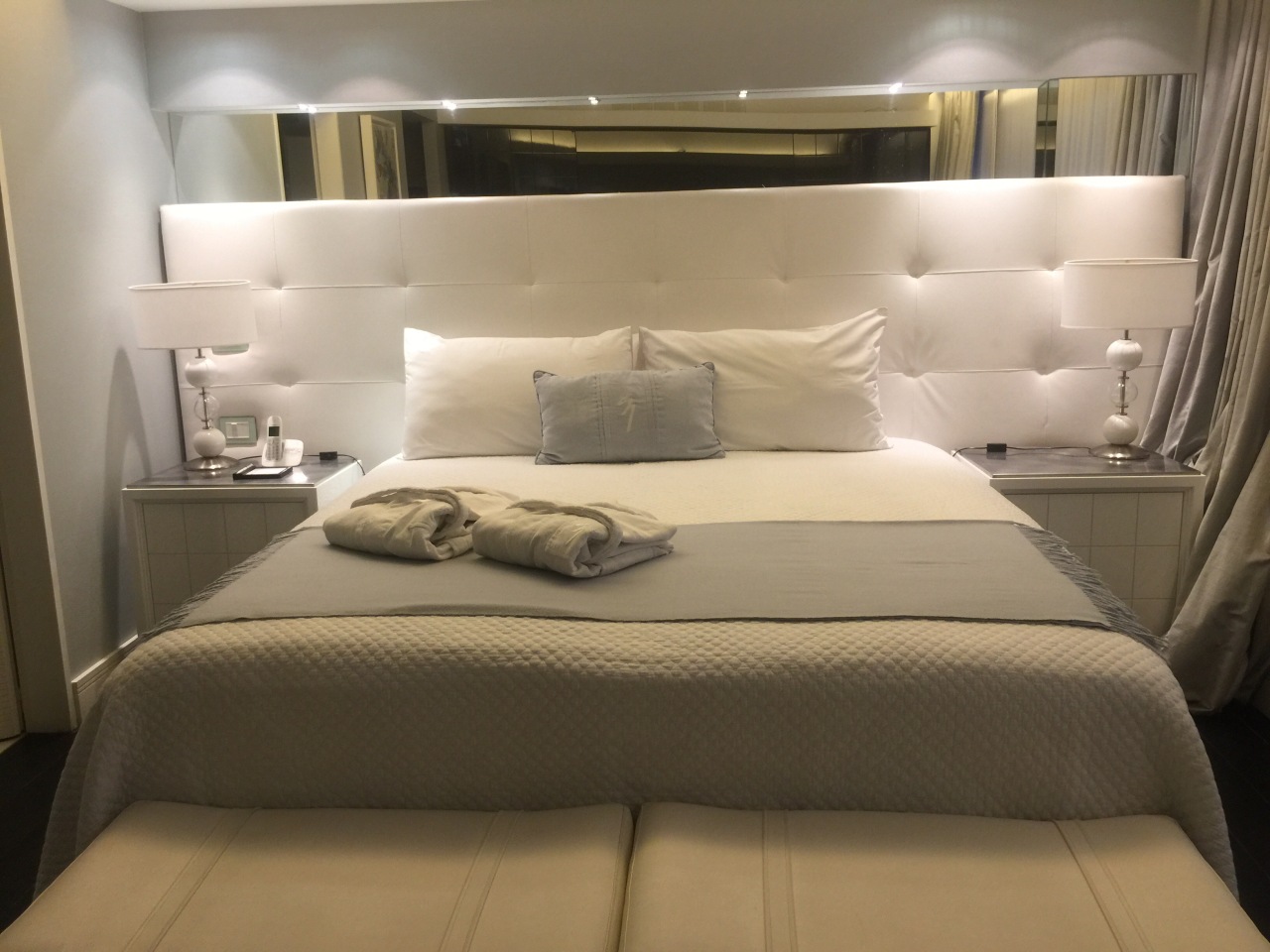 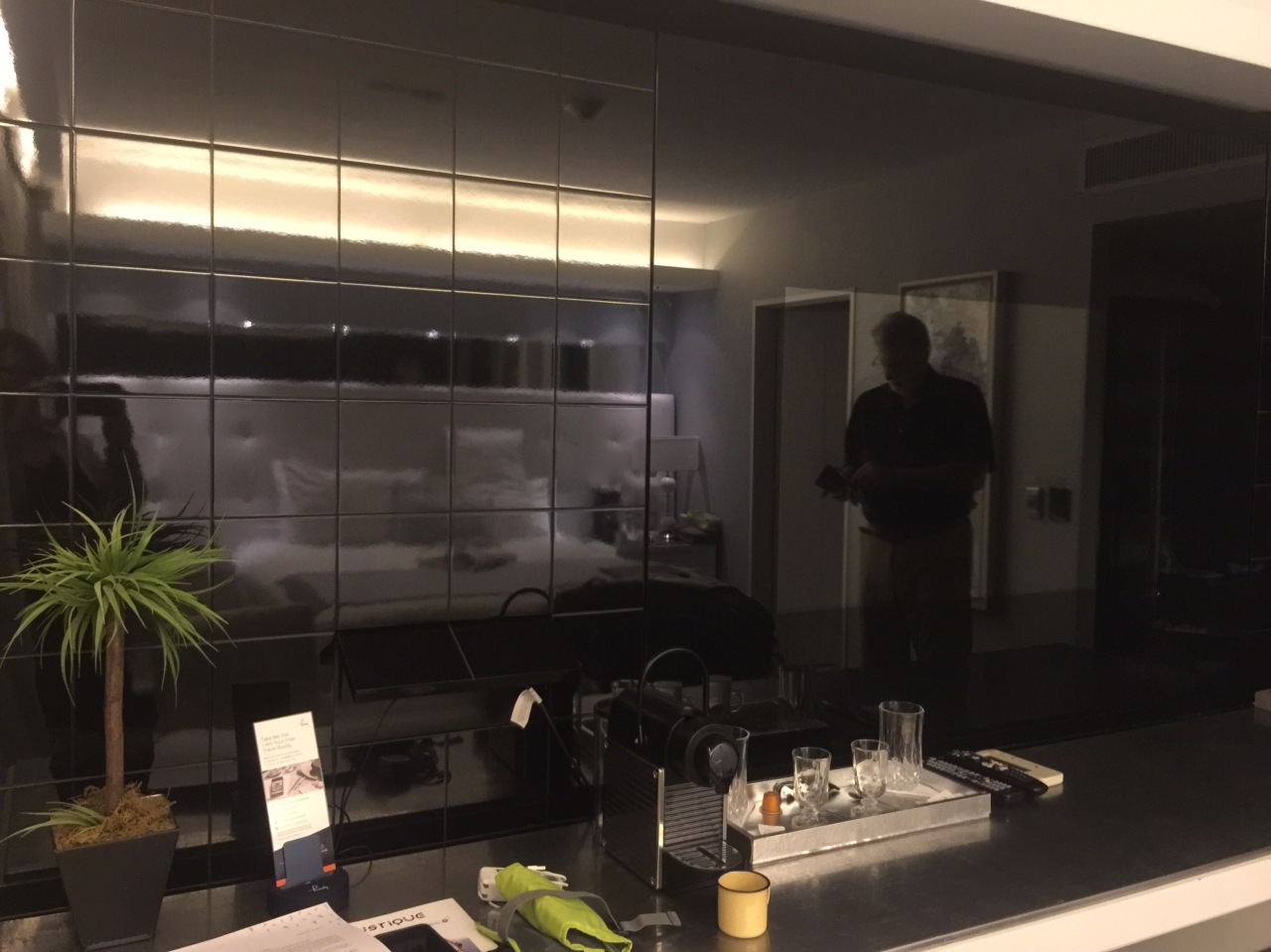 A wonderful evening with a quick stroll for a light dinner and then some much needed rest!  Tomorrow, it’s time to explore Buenos Aires ( or at least the Palermo district where we are staying!)