Well, we made it to our last day! Today’s paddle would take us from Long Island Lock Station, through Hog’s Back and Hartwell lock stations and onto the last set of 8 locks at Ottawa lock station. And no, we have no intention of portaging those locks!!!

We woke up to another lovely morning! Today was our last day, so I had saved clean clothes for our arrival at the capital! All sparkly and fresh for the day! 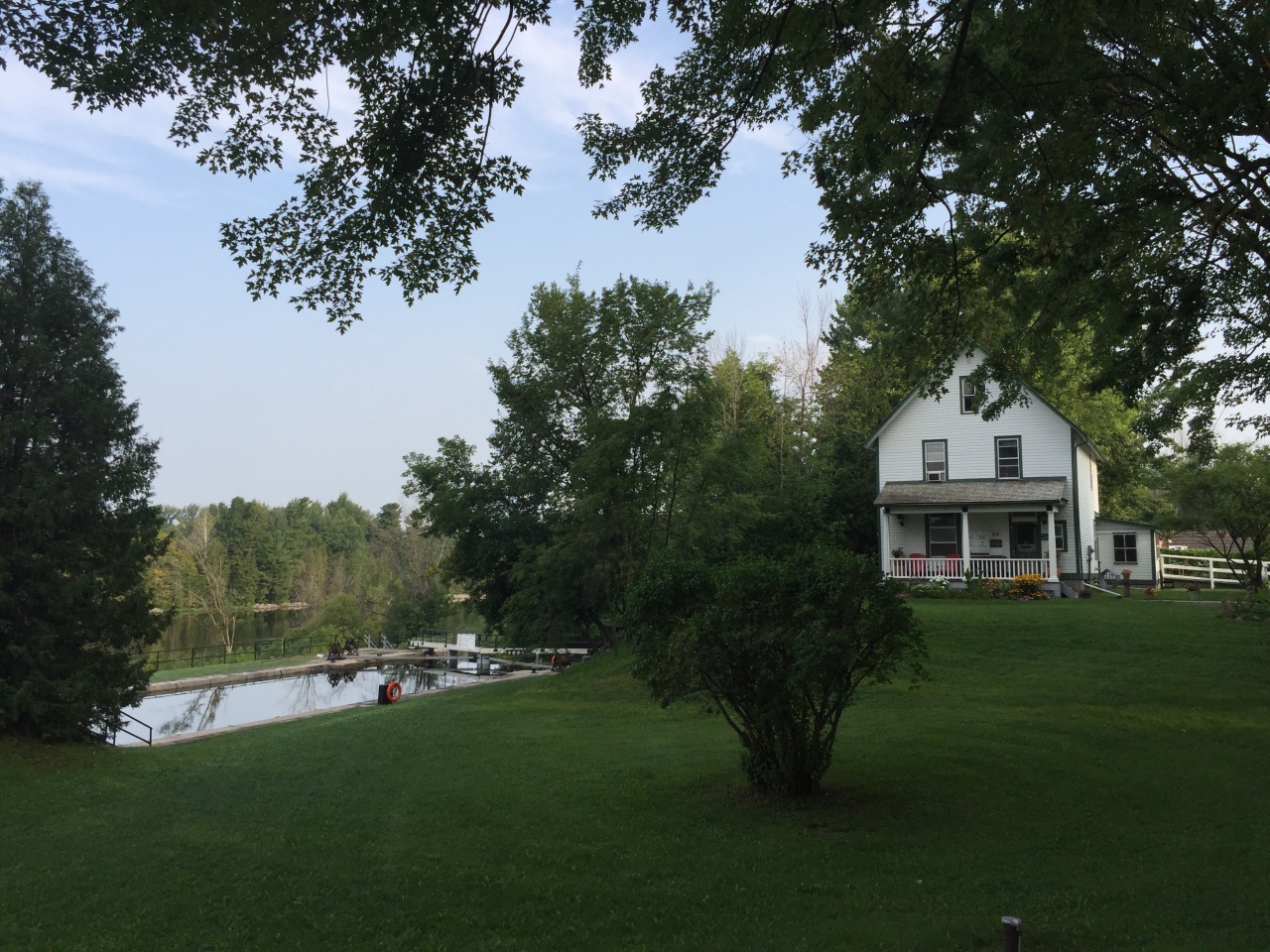 After our morning ablutions we had our last breakfast and then were anxious to break camp. 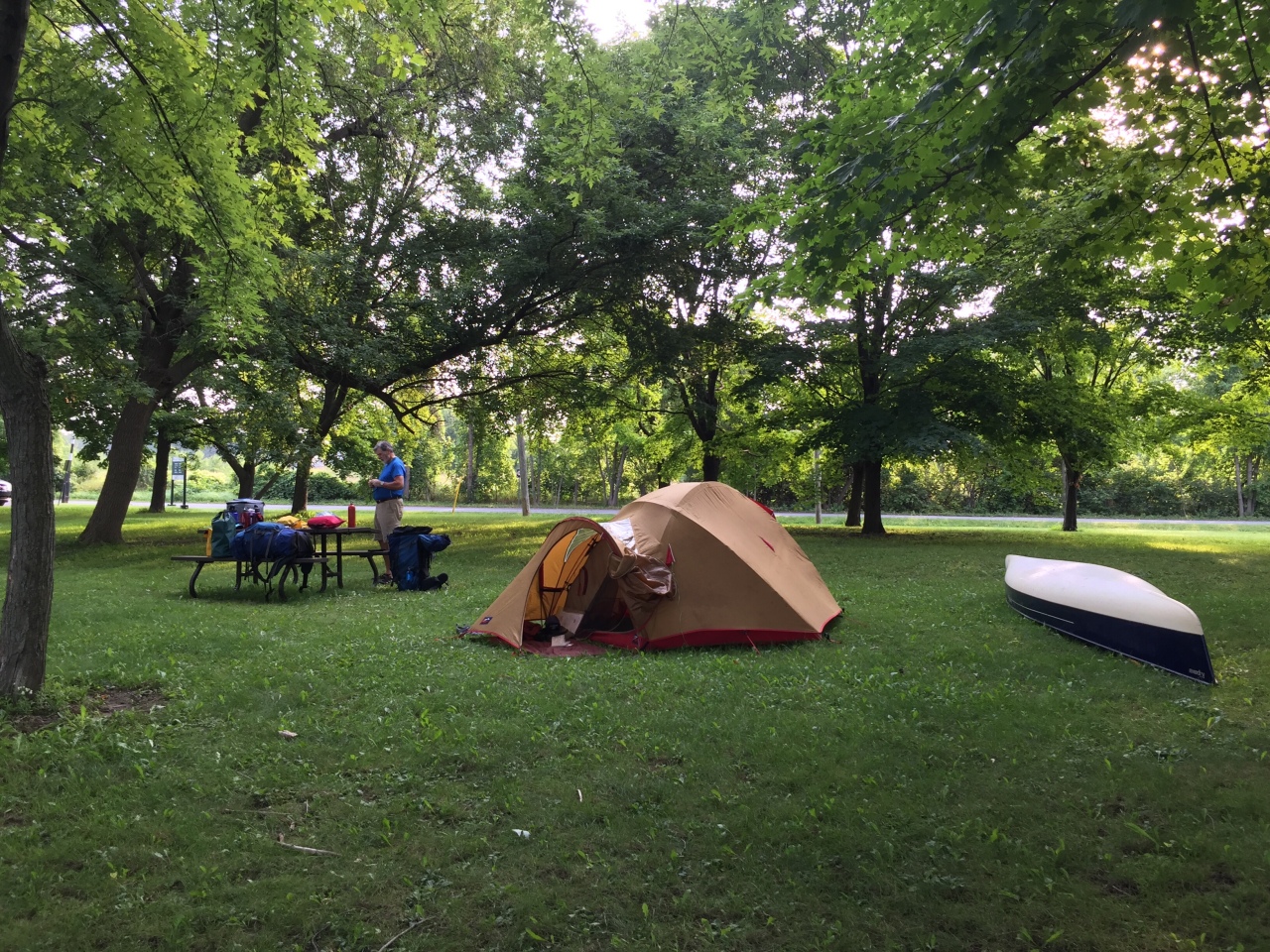 Our plan for the day was to portage around the Long Island locks, then hit the river, portage the last two lock systems and paddle to the Ottawa locks and then back again to Hartwell lock where Kim would be meeting us with our car.

When we put in, the lovely couple that we had met the night before were still at the night’s mooring and agreed to take our picture! We paddles passed their mooring and picked up the phone on the other side…our only pic of the two of us paddling on this trip!

Shortly after leaving the Long Island locks we paddled under the newest bridge on the Rideau. We had seen it being constructed through the years, but it never looked as pretty as from the water! Amazing how our perspective changes! 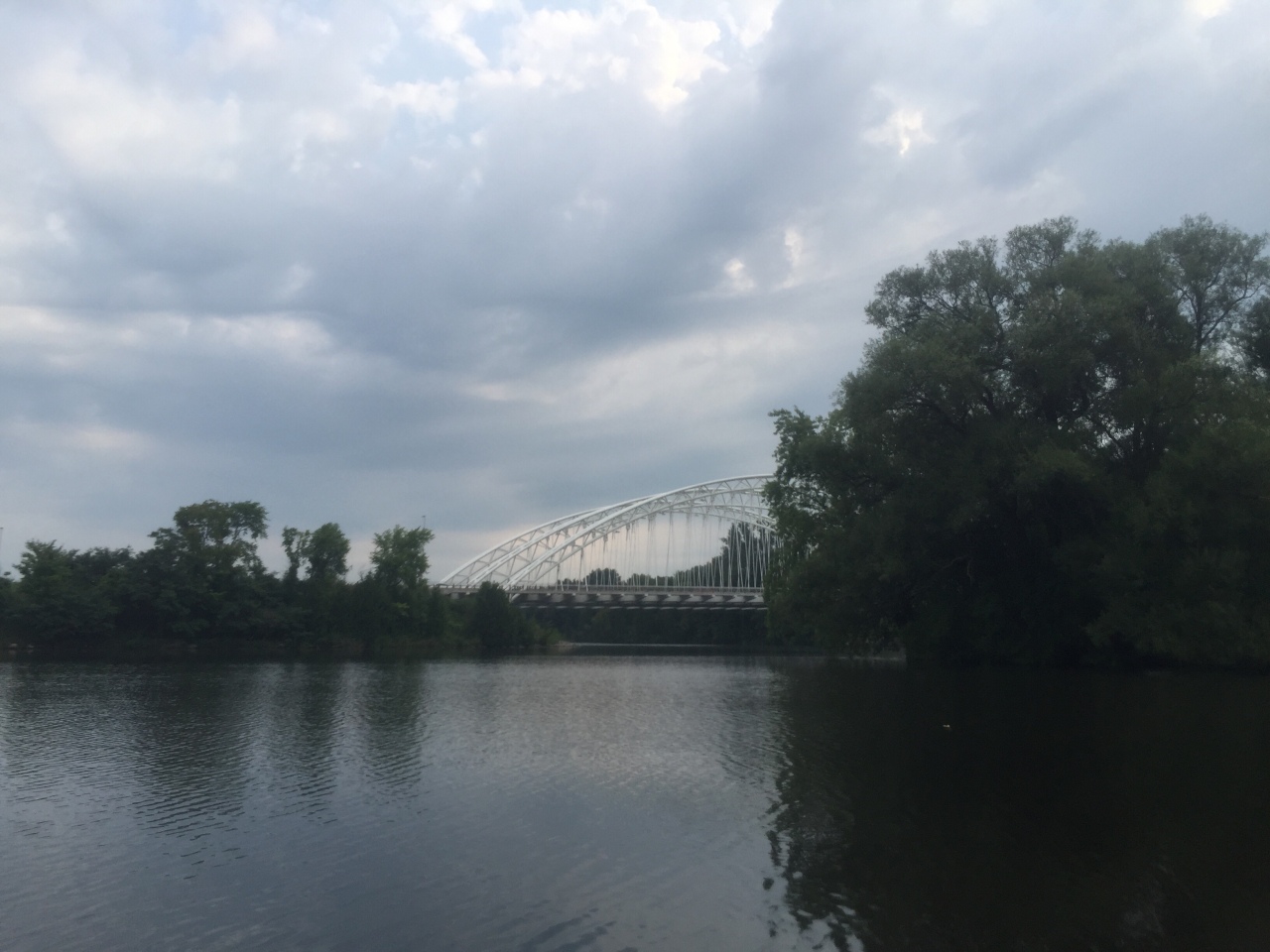 The river was narrow and pretty marshes cover4ed the backs as we went along. 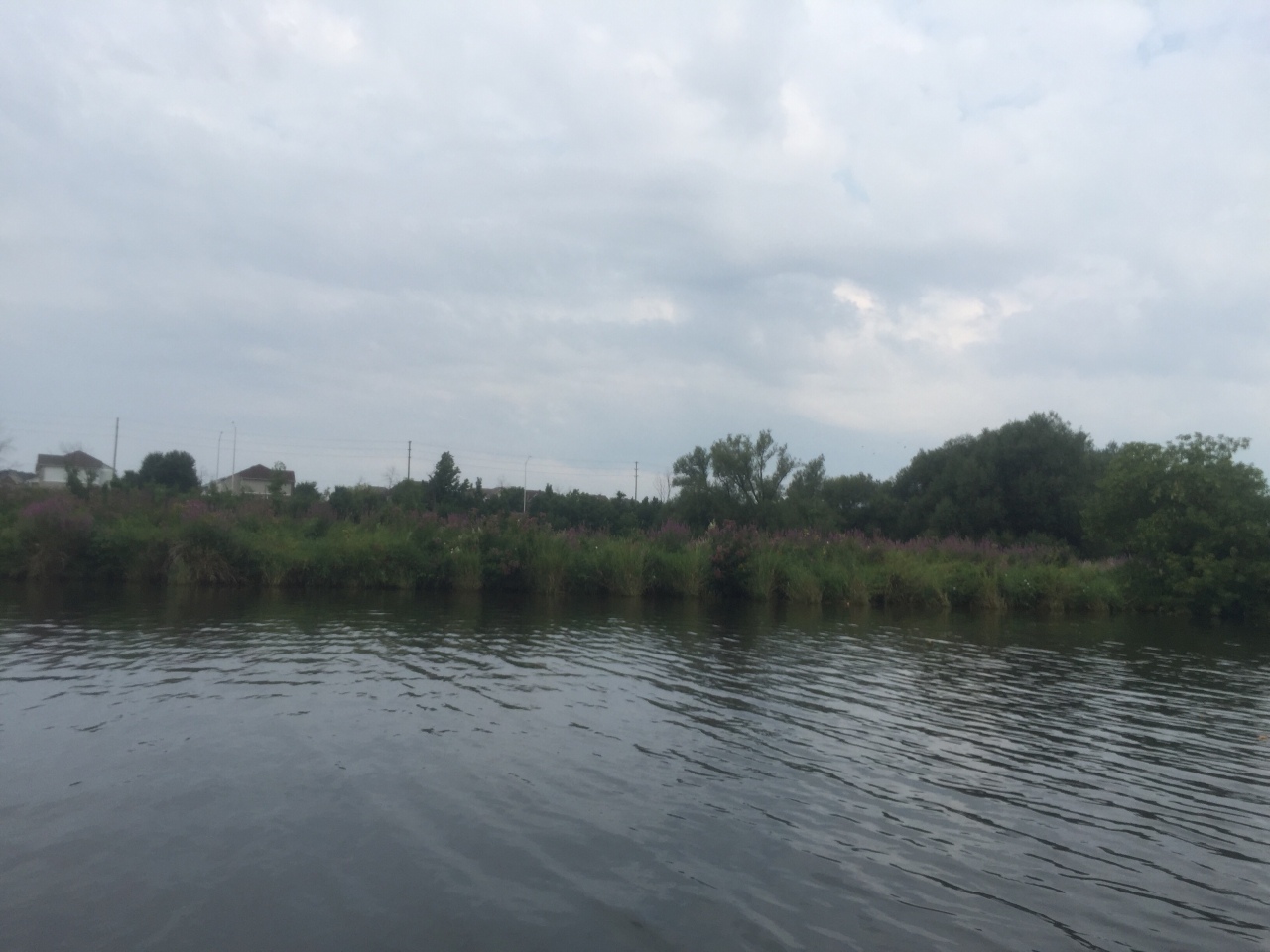 We passed one settlement where they have built new monster homes… funny how the shoreline was all of a sudden rock and crushed stone!

And then just passed them was a beautiful farm. Much more typically of the structures surrounding the Rideau when I was growing up. It make me wonder how much longer this farm will last before it is bought out by developers who will construct even bigger homes on the shore!

Their was a threat of a thunderstorm this morning for around 10, and sure enough as we were paddling under the airport flight path, the lightning started. From the sound it seemed to be pretty far away, but we hugged the shore to make for a rapid escape if we needed it! We meandered along the river this way until we arrived at Black’s Creek Lock station. Just before we arrived, the rain started to spit, but by the time we got our jackets out it stopped again!

Earlier on this stretch our friends from the night before passed us in their pontoon boat. They arrived at the lock station about 30 min ahead of us and were in the middle of a torrential downpour that completely missed us! Sometimes it pays to be slow!!

I found it amazing to paddle down this river and see the green green banks where from above there was nothing but urban development! Here we are canoeing under Hunt Club Road, and the next scene it just passed it. Hard to imagine herons fishing in the waters below when you’re stuck in a traffic jam above!

We soon found ourselves on Mooney’s Bay. The last time I visited this park it was to see my grandniece Nora paddle in the Nationals. While the paddling course was permanently in place the only major site we saw was this pirate ship taking tours on the bay!

At the end of Mooney’s Bay we reached the Hogs Back locks. What an interesting portage it was. I think it’s the first time that Dan has had to carry a canoe through a concrete walkway! I guess they don’t want you crossing the main drag here!!!

At this point the river splits away from the canal. We will follow the canal the rest of the way into Ottawa. 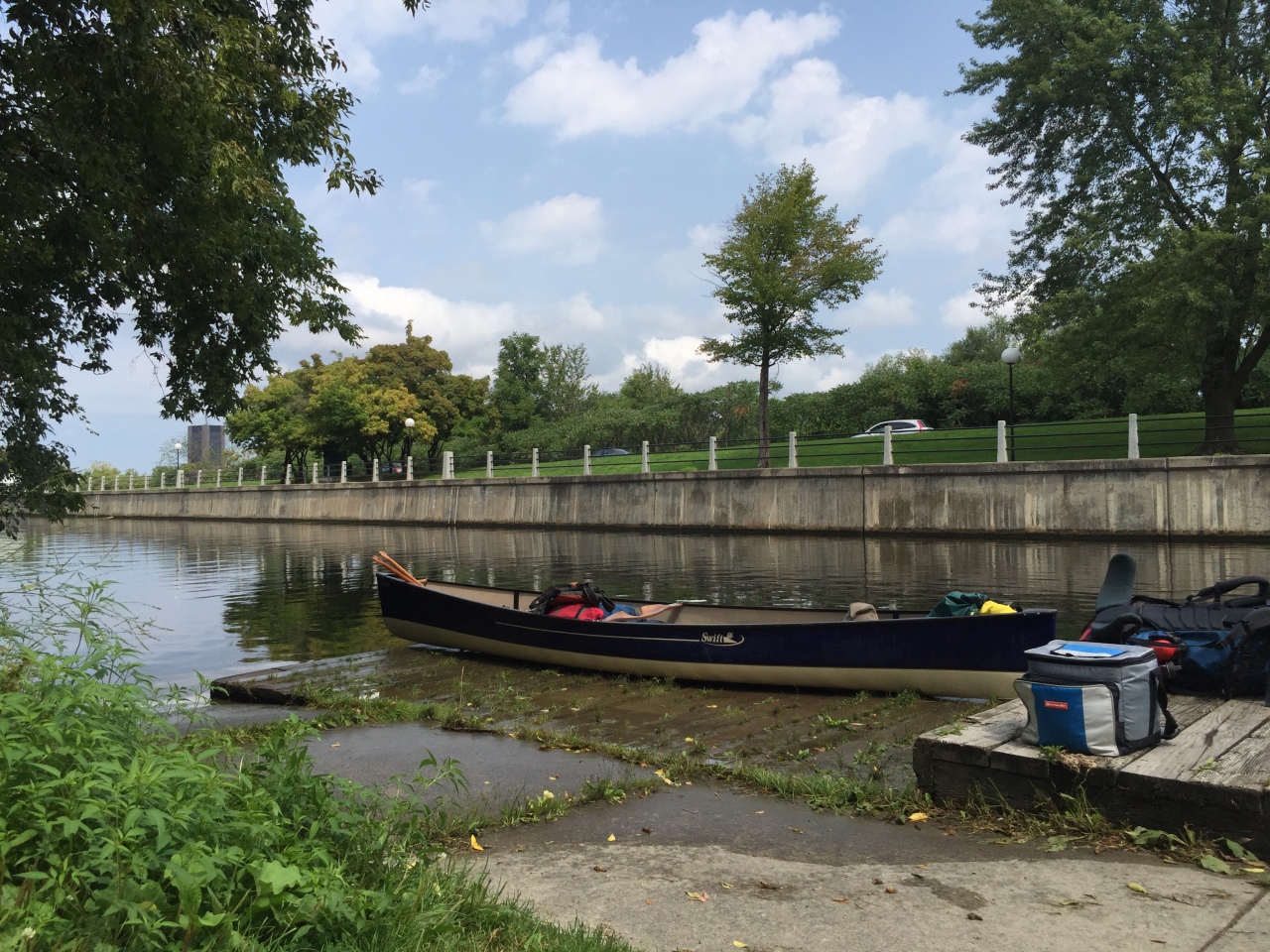 Just a kilometer down the canal and we arrived at our last lock station at Hartwell. Very picturesque with a lovely view of Carleton University just across the canal. There was a long walk down to the bottom of the portage, so I asked the lock master if we could store our packs in the station until we returned in a couple of hours and he said “sure”! It was lovely to lighten the paddling load for the last 5 Km into the final lock station, and then back!

After texting Kim re timing of our arrival back from the last Canal locks we set off. A short paddle after the lock station we crossed Dow’s Lake – Ottawa’s central water playground, then back into the canal. Even though there is a “No Wake” rule through the rest of the way, the cruisers still kick up enough for a narrow passageway making paddling just a little more challenging at the end of the day as the waves reverberate off the canal walls.

Soon we could see more familiar sights such as Lansdowne Park and Ottawa U. 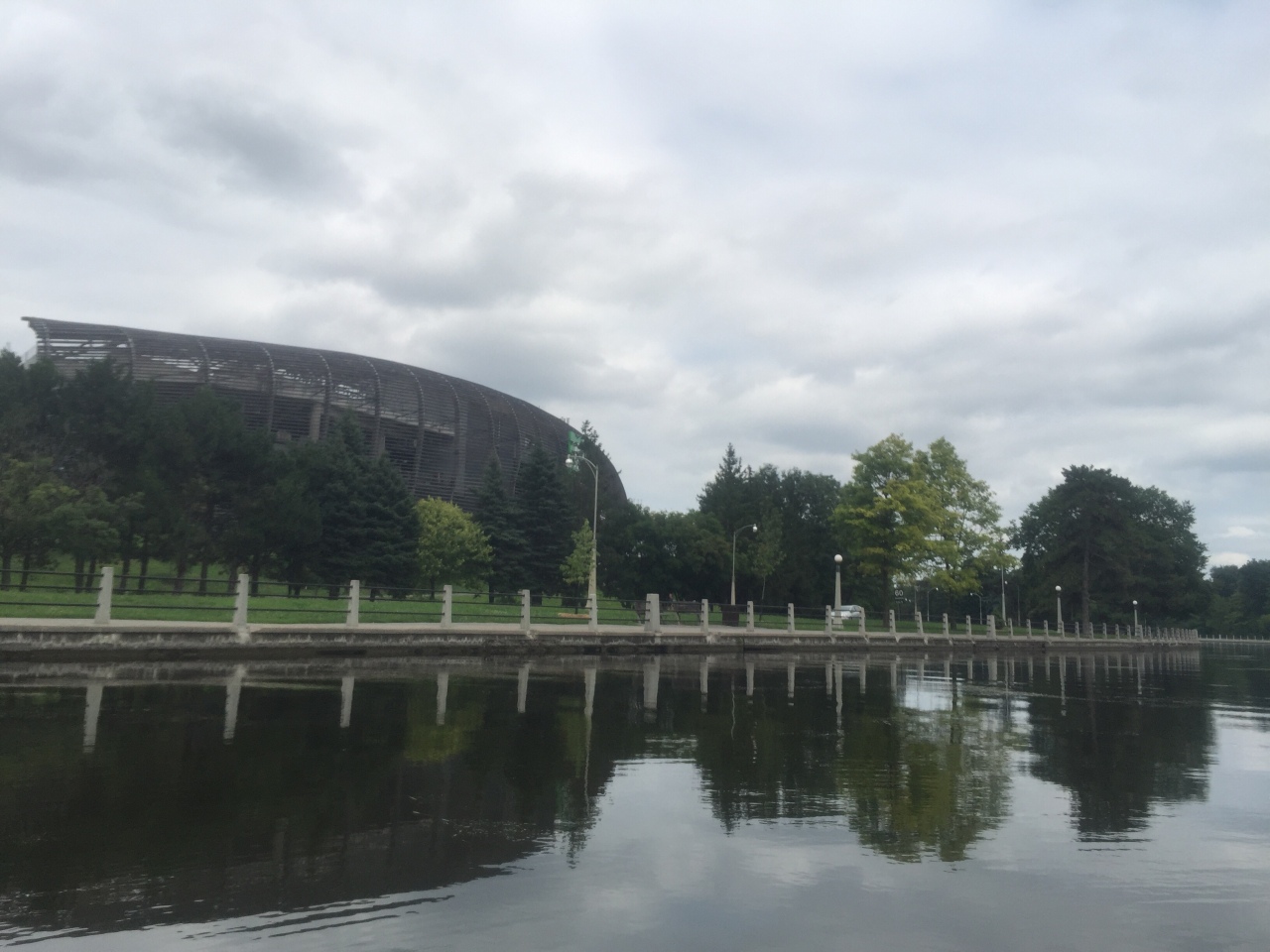 And then the approach to the Chateau Laurier and Parliament hill. 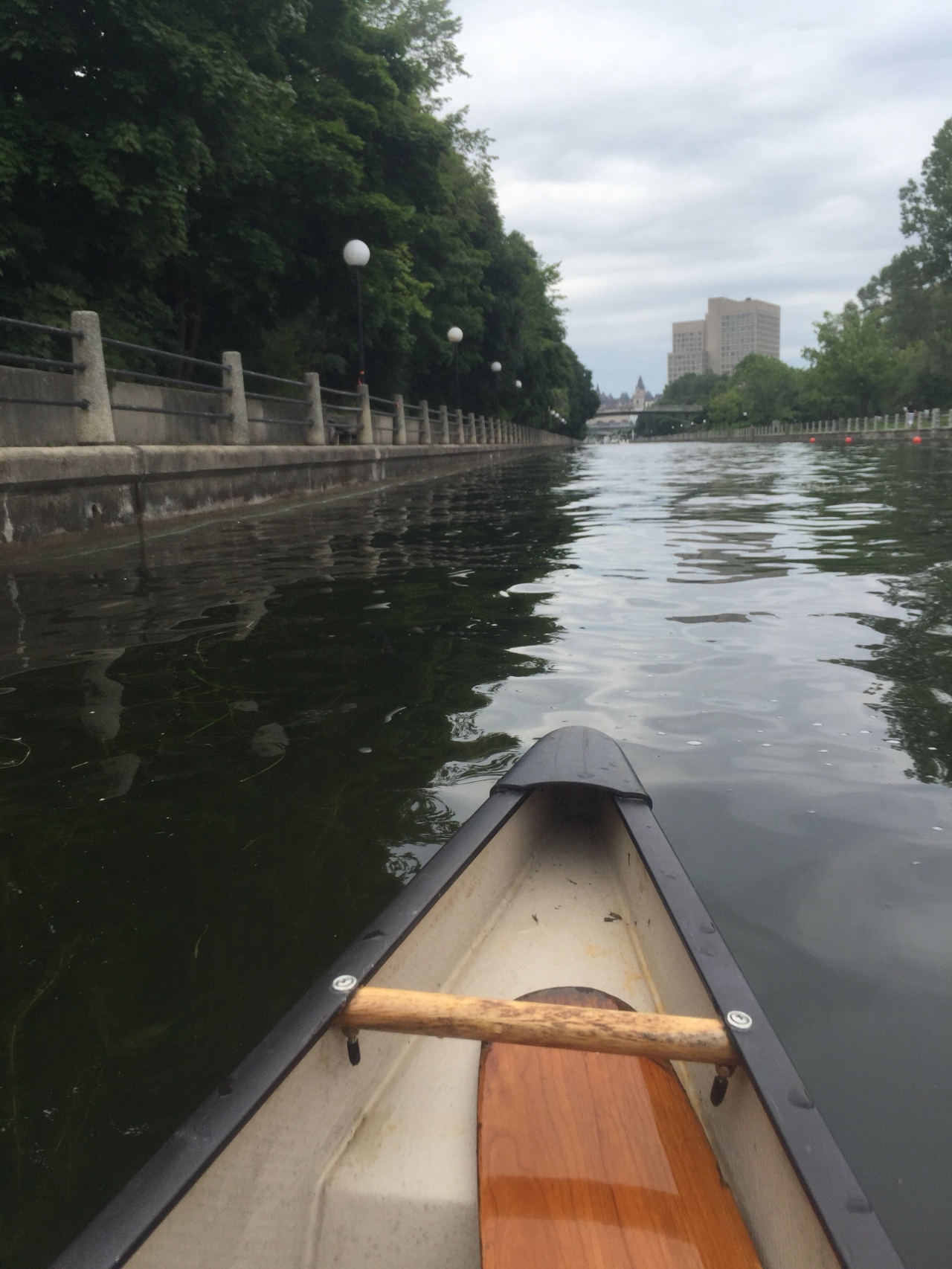 We paddled right up to the paddling dock under Wellington St and got out to taste a few final pics of our journey! When we asked the Parks Canada lock worker to take our picture, she said, “Oh, I know the best spot, follow me!” In the back ground you can see the “8” locks of the Ottawa station that transfers boats down into the Ottawa river. Very Cool! 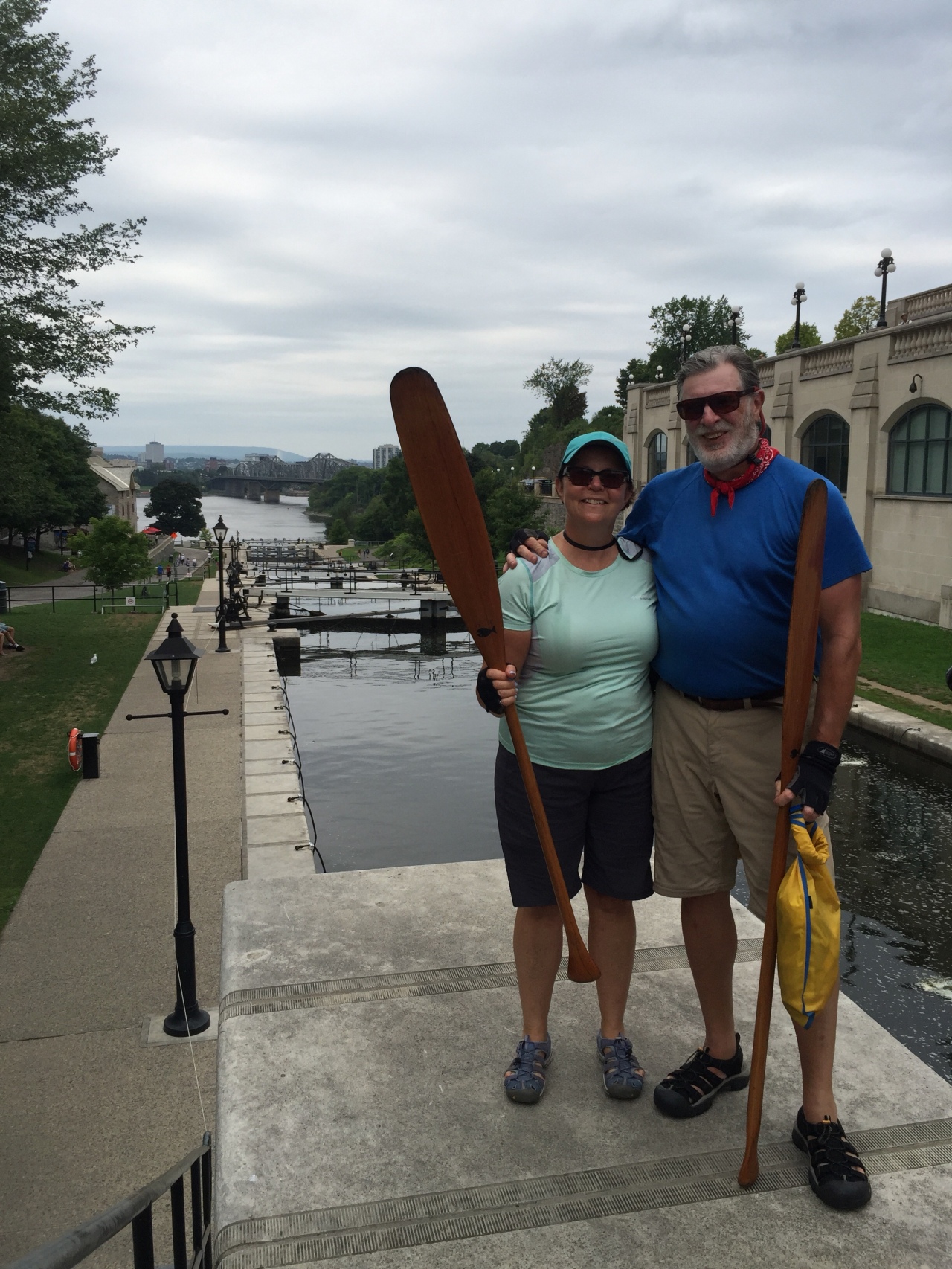 After that shot, we headed up to Parliament Hill to visit Justin. They would not let us through security with our paddles, so we settled for this shot from a friendly passer by! Some people asked about the paddles so we told them we had just paddled up from Kingston! They were duly impressed!

Once requisite shots were taken I had got get a shot of Dan putting the canoe back into the water from our paddle dock parking spot. This spot is significant because just 5 minuets later, as I was comfortably seated in the front of the canoe, Dan stepped into the canoe and decided to do the splits as it floated away from the dock leaving us both in the canal with the canoe virtually on top of us! Pretty spectacular finish to a flawless trip – not necessarily where I want to take a dip, especially as I had clean clothes on that morning! 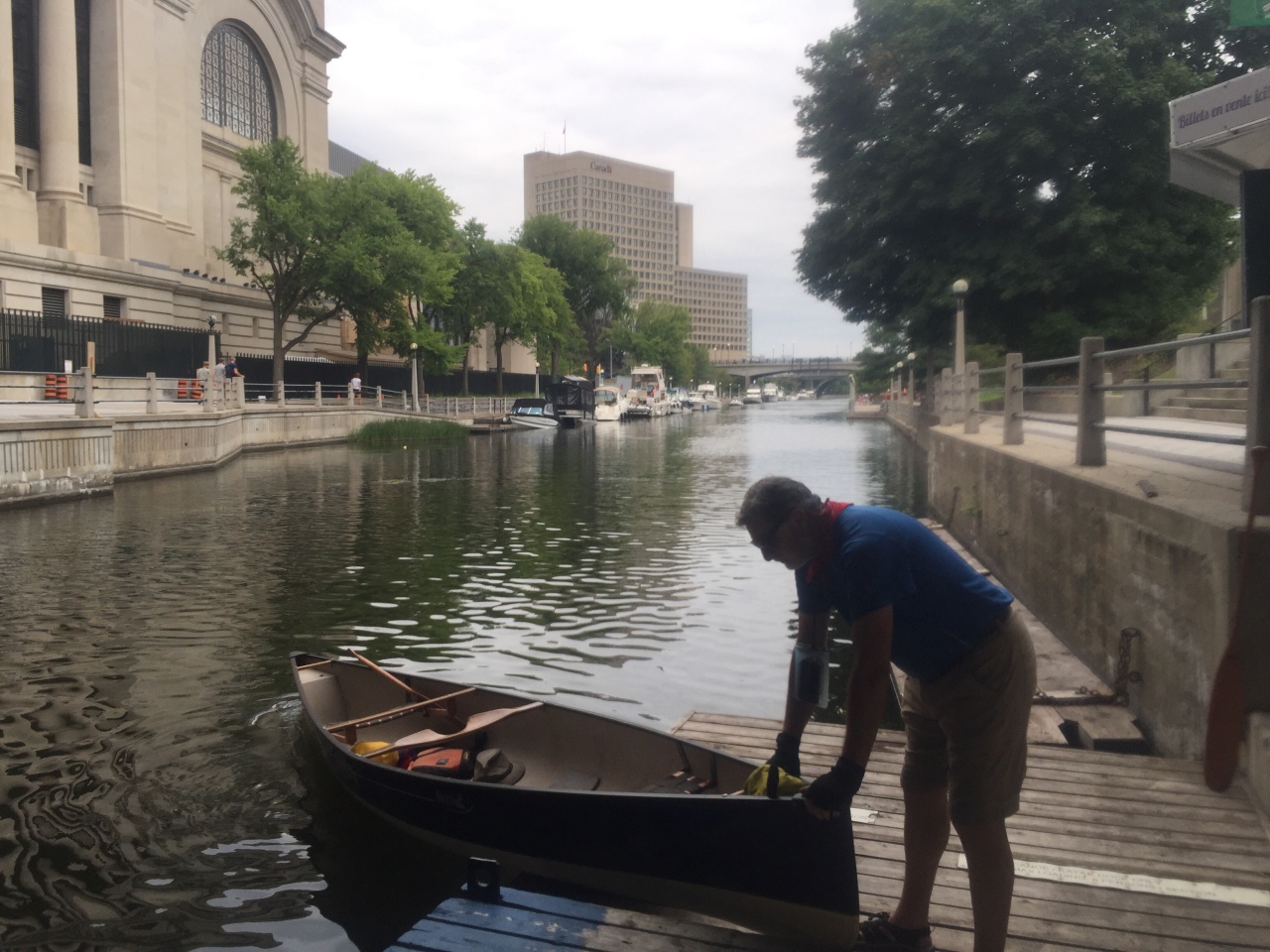 Oh well, rescued by a couple of Parks Canada guys we managed to get our canoe and Dan and I out of the water, and no gear was missing! Thank goodness for water packs… even my Fitbit survived! AND thank goodness that we had stored our bigger nonessential stuff at the lock station!!!

Sopping wet, we canoed though the canal enroute to the Hartwell lock station where we met up with Kim. She had expertly scouted the station grounds and with permission of the lock master got the car as close to the portage out as she could! We quickly got the canoe and the rest of our gear loaded up and then I went into the washroom and used the hand dryer to dry off my clothes.

Feeling somewhat refreshed ( at least presentable enough to go to a restaurant for dinner) we headed out. We decided to stop at the Black Dog in Manotick for an incredible burger. ( everything tastes incredible when you have been cooking over a camp stove the last few days!). Oh yes, a celebratory isotonic was also in order! 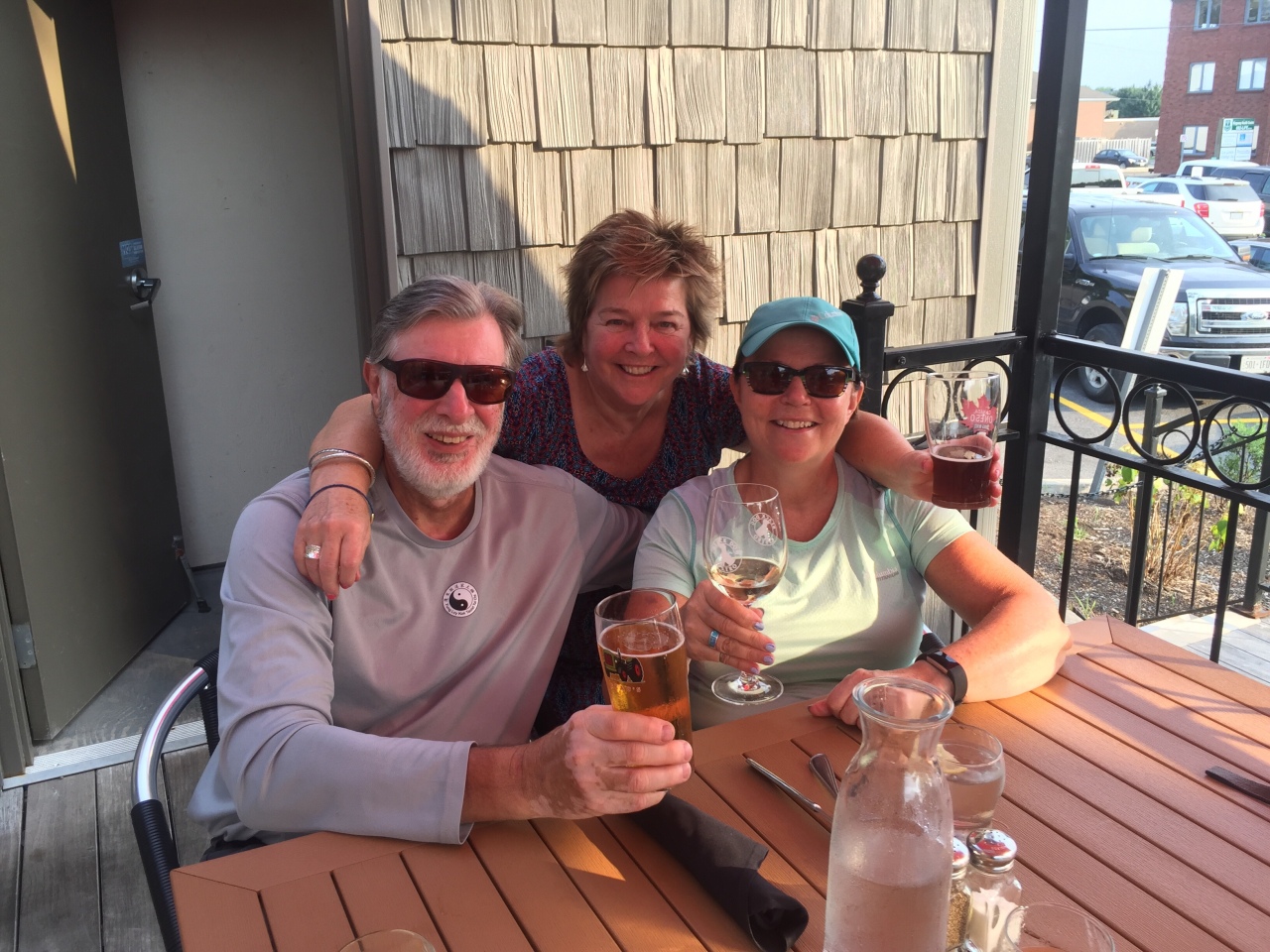 A big THANK YOU once again for Kim for driving from Smiths Falls to come and pick us up! It was a real life saver.

It’s interesting to reflect on this trip now that we have come to the end. The lock system was an incredible adventure, so much history at every lock. And we just can’t say enough about the Parks Canada Staff there, nor the facilities and sites at which they let paddlers camp. ( you can camp at the lockstations for $4.90 per person per night! Unbeatable scenery and washrooms and potable water for the most part!). The wild life along the system was beautiful…we could never tire seeing Osprey and bald eagles fishing, nor the ever present kingfishers flitting along the shore. Dan’s bucket list item is complete, and I’m glad he took me along for the ride ( although I probably could have done without the last swim… but it will be memorable!)

Until our next adventure!