After a lovely dinner and nice bottle of wine, we took a brief stroll along the water front to catch the sunset.  Red sky at night was what we were looking for!! 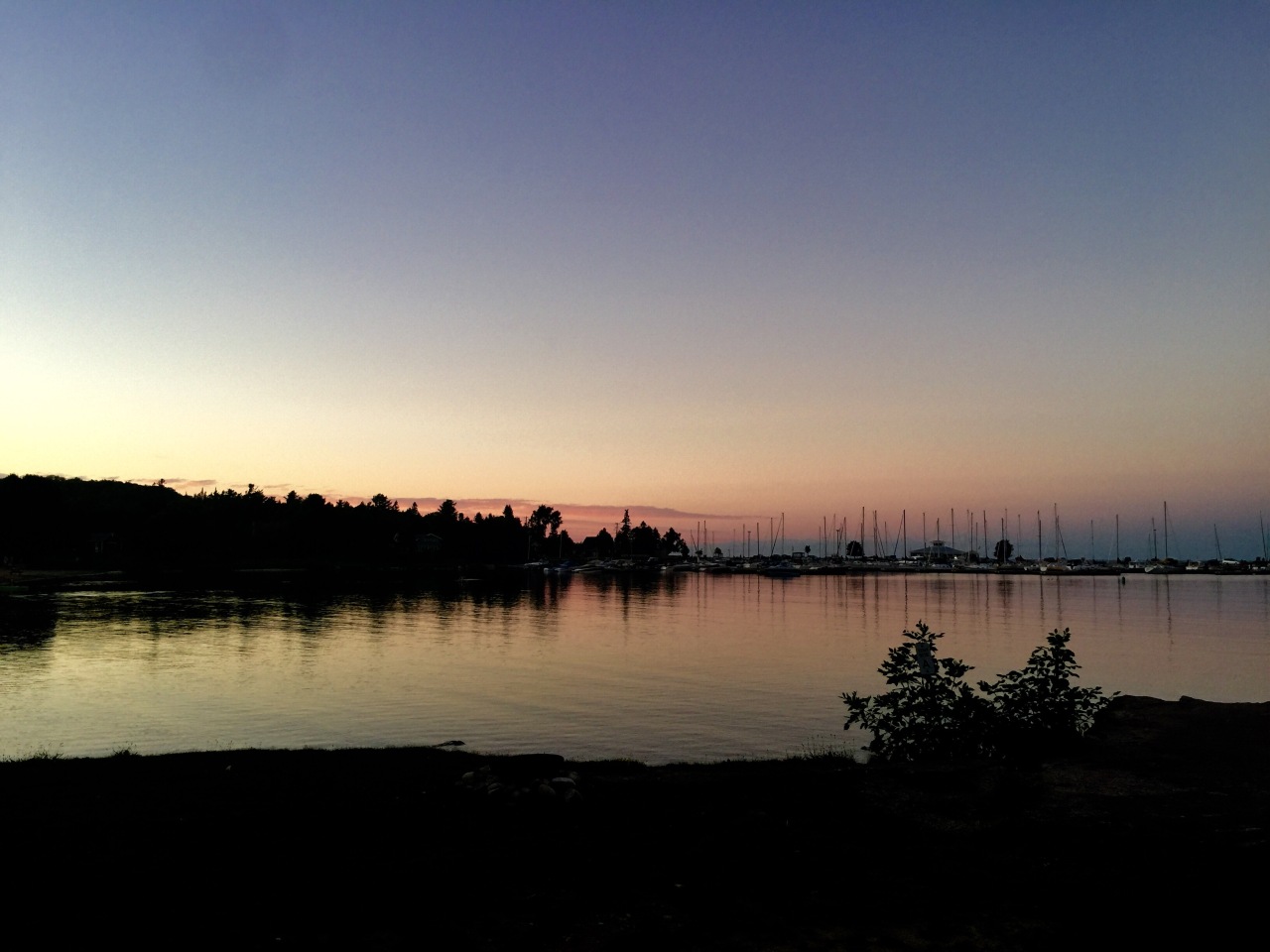 This indeed bode well for our adventure today! The weather was perfect, a high of 24 and we were well prepared for what promised to be a beautiful day!

After we positioned the cars we were off!  The hike promised to be both spectacular as well as challenging, so superhero pose was in order!!!

Off we went through the woods.  Today’s hike followed the Pennisula of Lion’s Head, so wonderful vistas were in store for us!  But not before the challenges of getting there!

There were many ups and downs, lots of crevices, and of course lots of poison ivy.  Here’s a creative planting of the evil weed following along the rocks crevices! And crisscrossing the path…

But the challenges were worth it!  Our first views ( facing south east towards Barrows bay and other sections of the escarpment that we have previously hiked!

We’re noticing the extraordinary color of the water close to shore… Almost a Mediterranean blue, brought about by the limestone cliffs.

Of course, Dan had to prove he was the bravest among us!!! 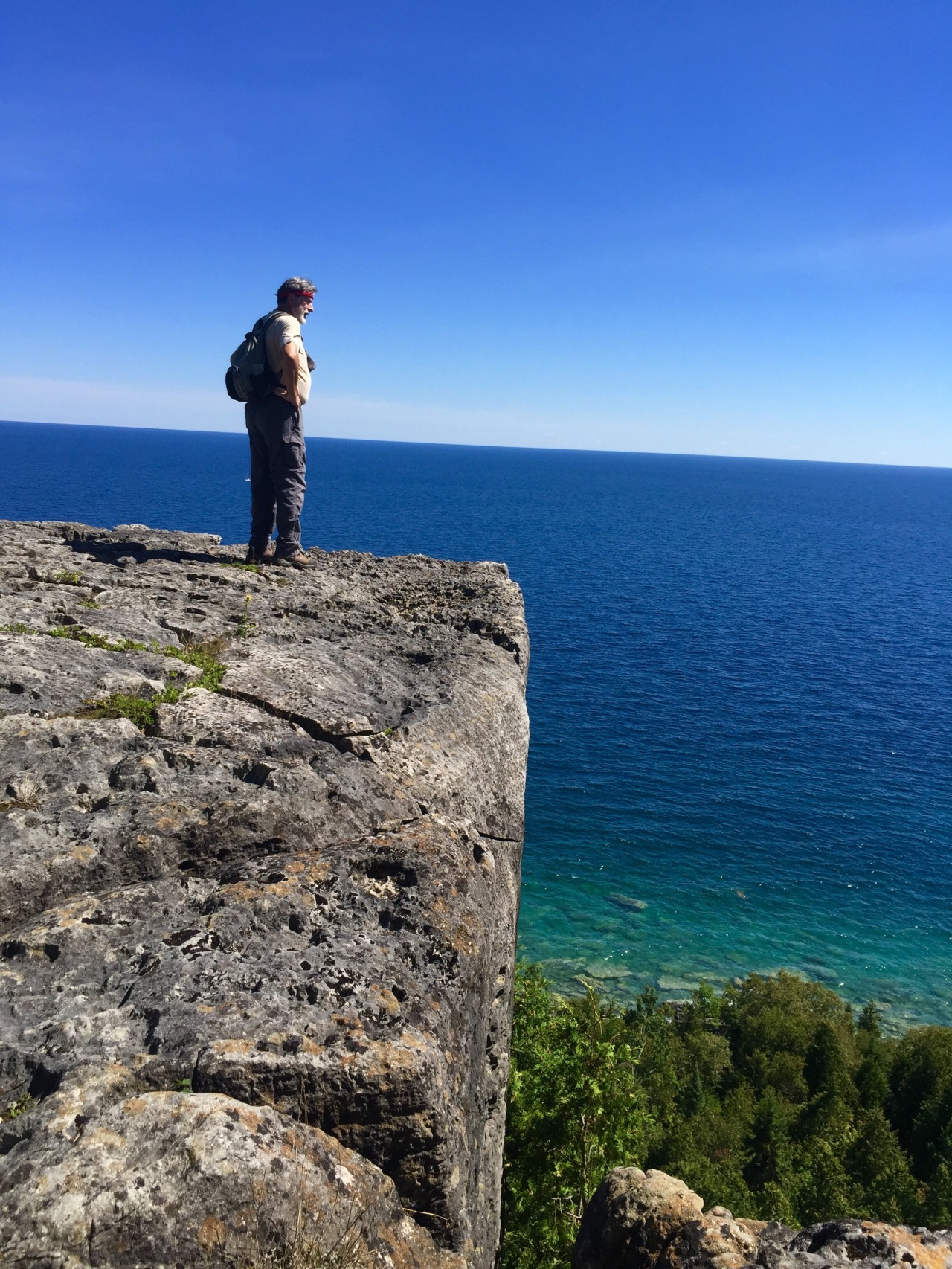 Not only spectacular lookouts, but much of the  trail itself was right beside, and I mean RIGHT BESIDE the cliff!!

One wrong step and yikes!! 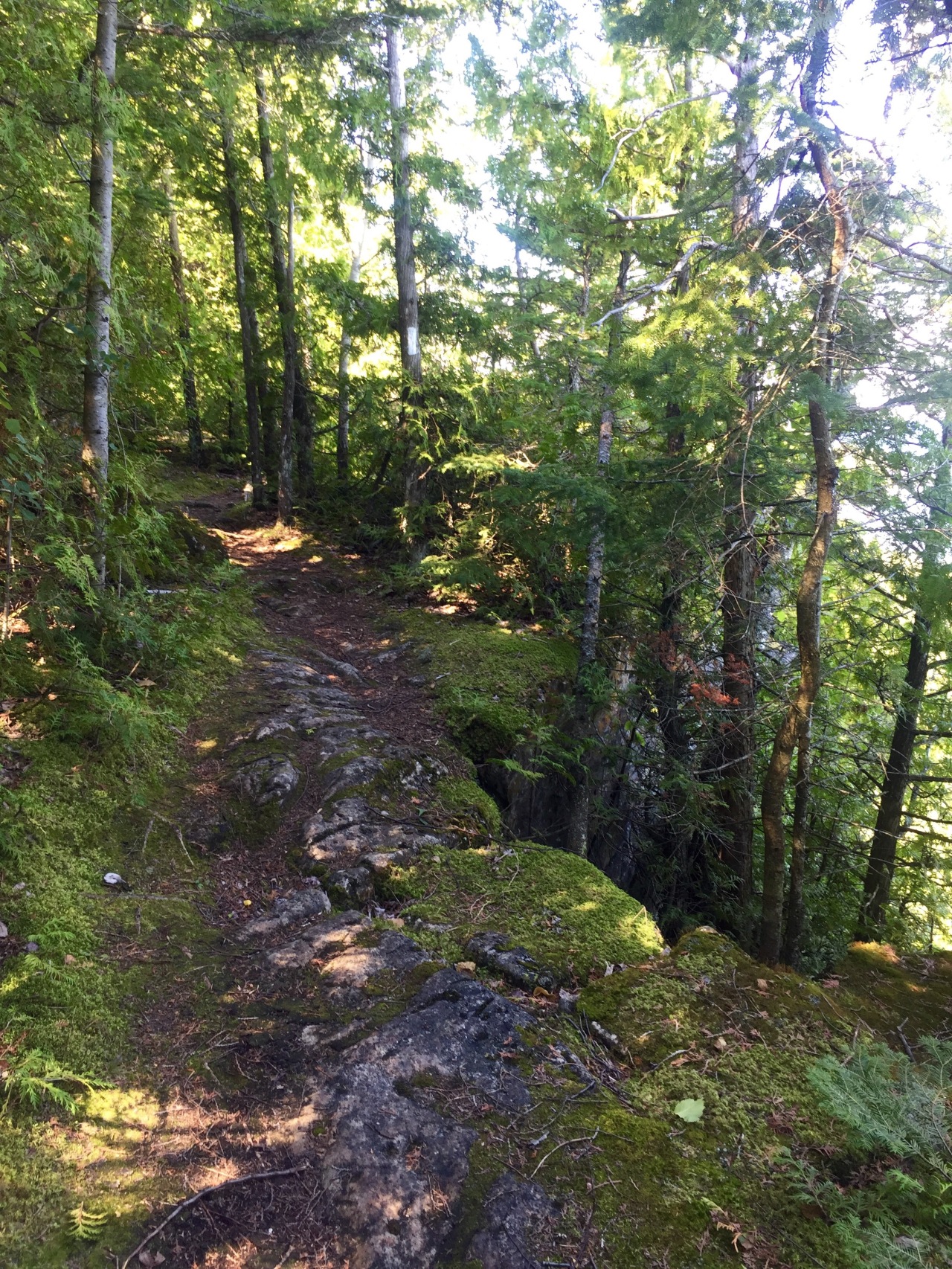 The few times we headed into the woods it was either to climb up and down more rocky trails, or it was to look at more incredible rock formations.

And what contrast to find this little ruby coloured  toadstool amongst these giants! 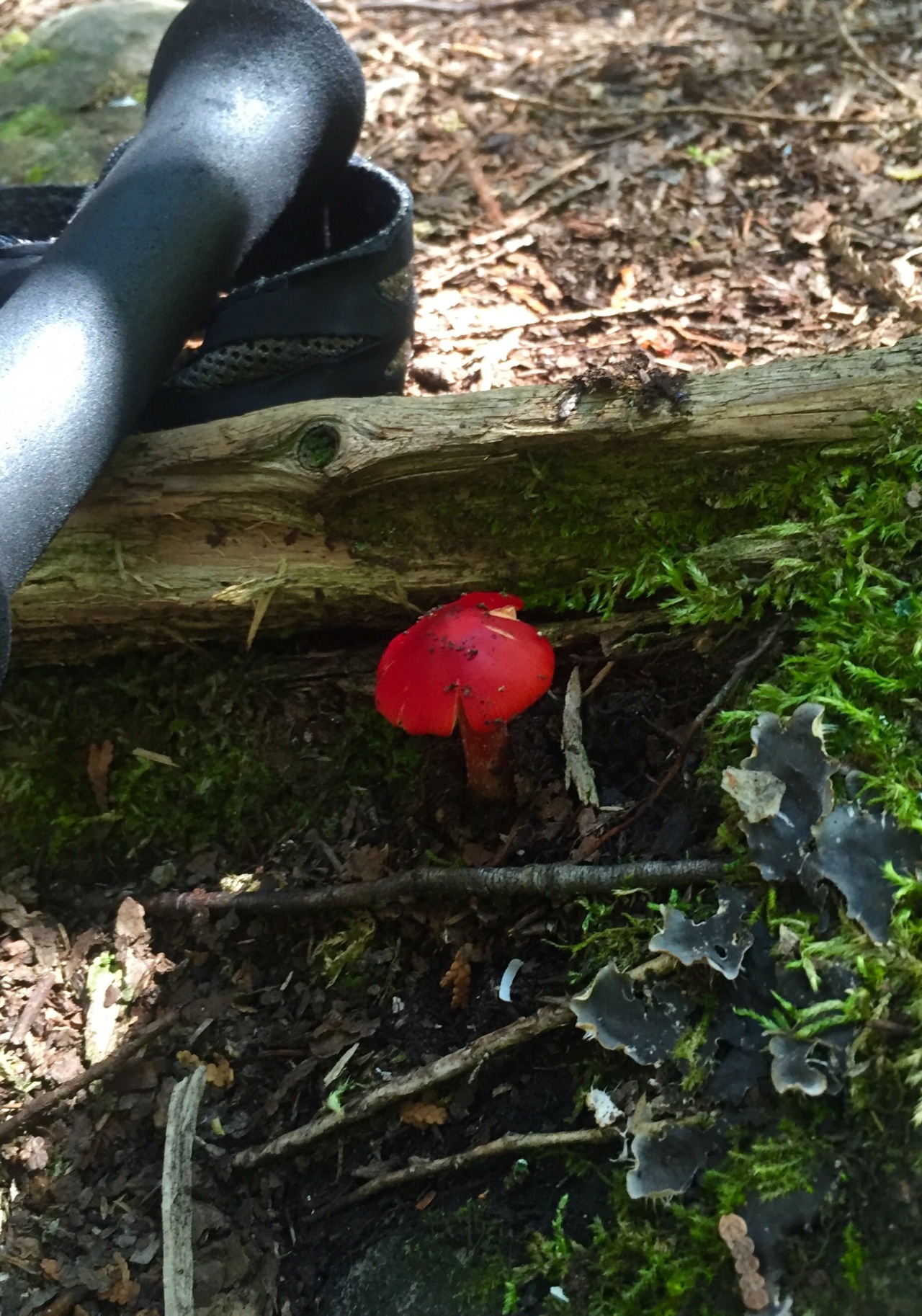 Our next adventure was to climb down the escarpment to McKay’s Harbour… A remote place on the trail that allows hikers to overnight there.  We chose this lovely spot for our lunch break! 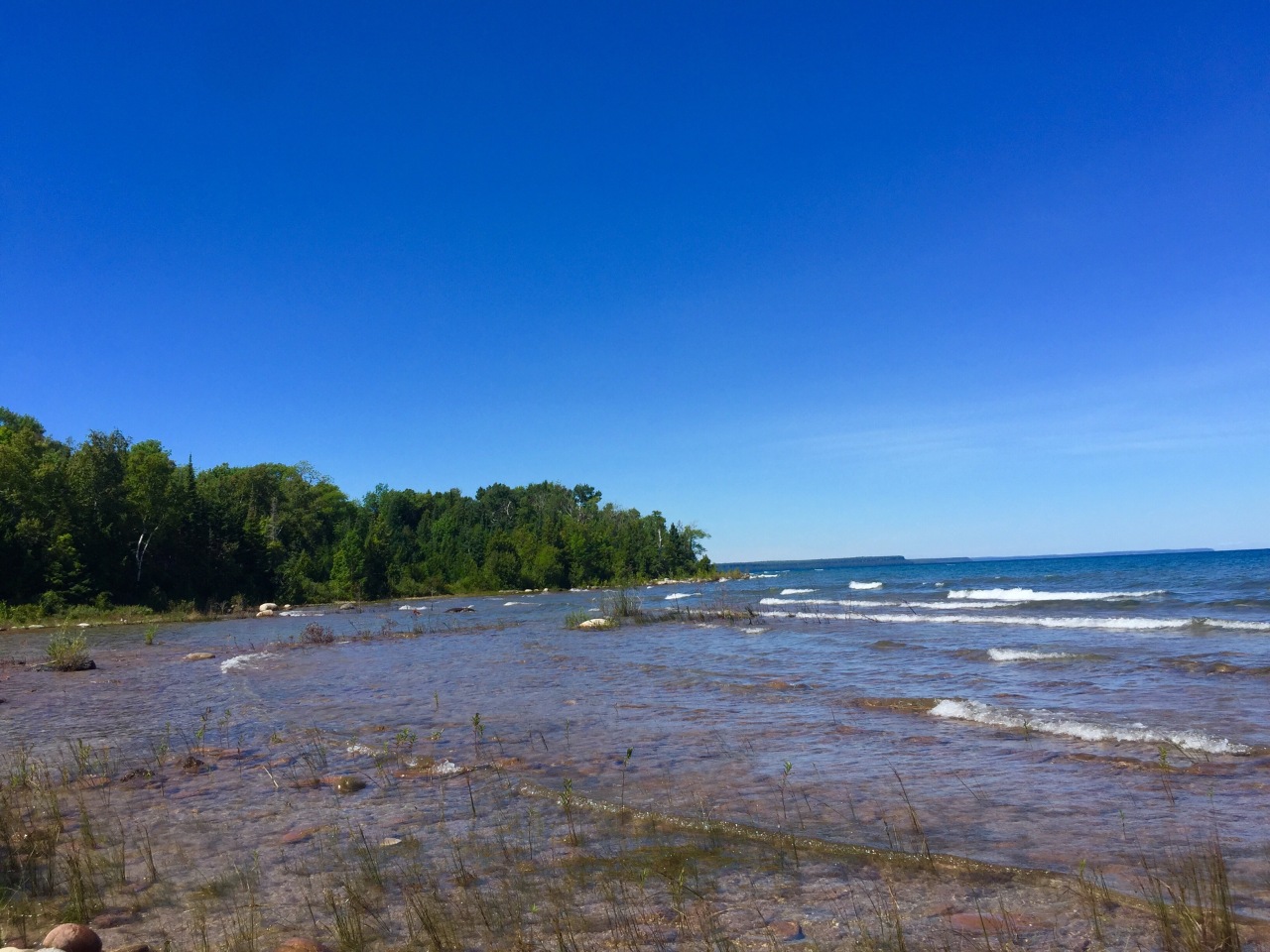 After our break the trail took us along the shoreline.  I thought there was “no portaging” on this hike!!! 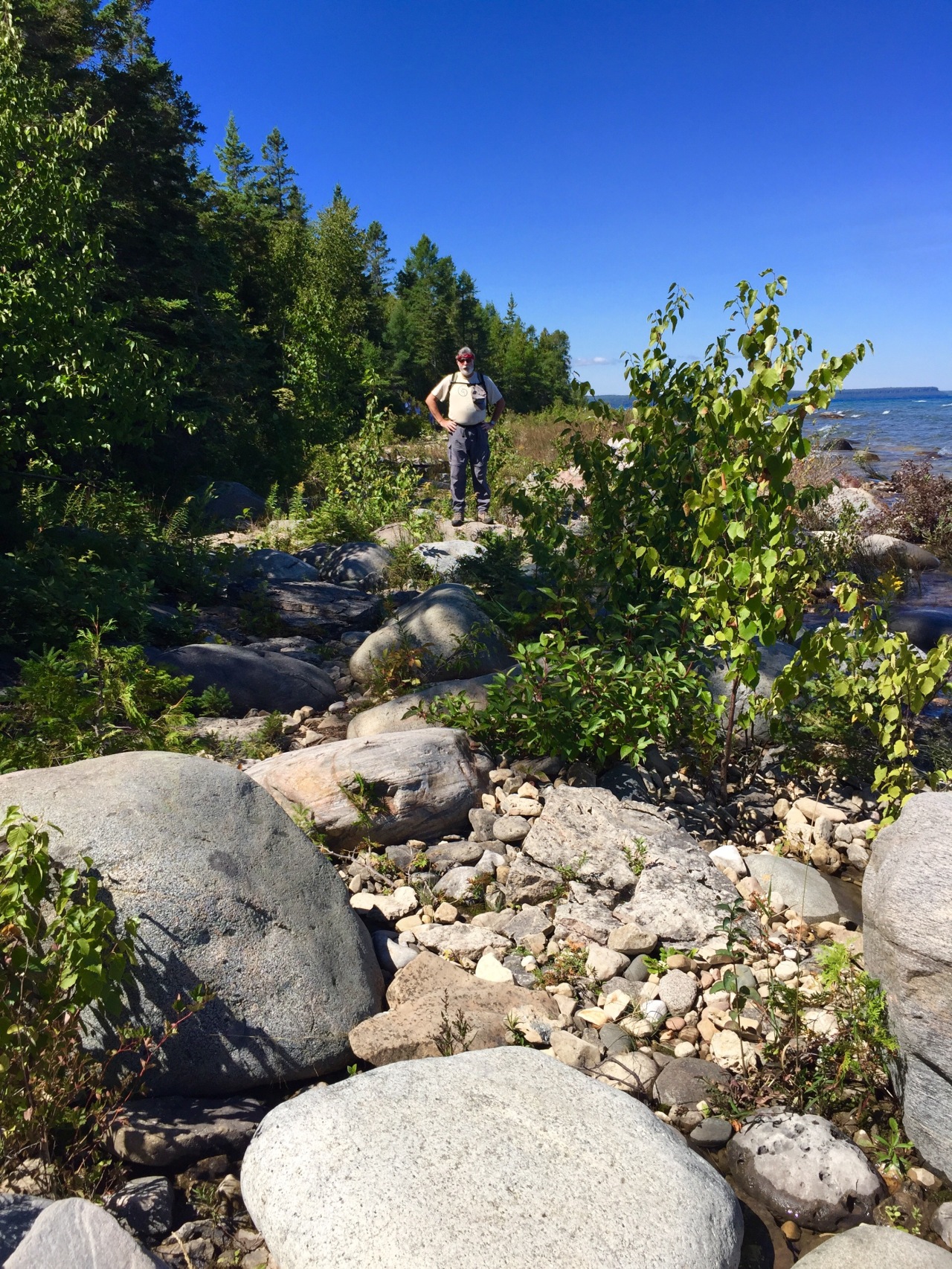 Also by this lake side trail Dan found the most enchanting flowers.  I have no idea what they are, but they’re beautiful… Almost like a wild lisianthis!

Well beauty has its virtues, and almost takes the sting away from having to remount the escarpment!  First a little scree, if our ankles weren’t already tried enough!

And more up we went! 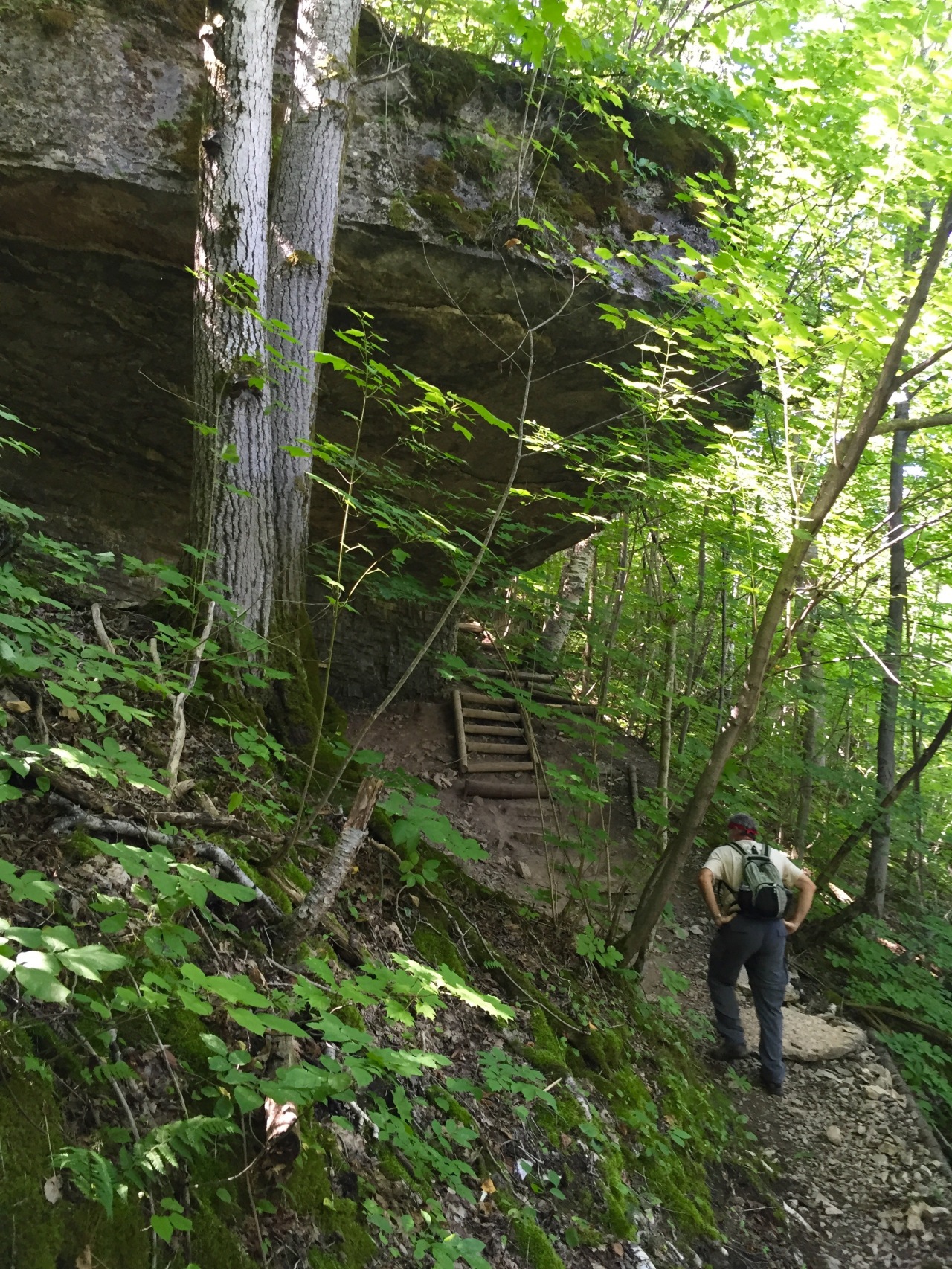 And the climb was well worth it!  We came to the top of Lion’s Head! 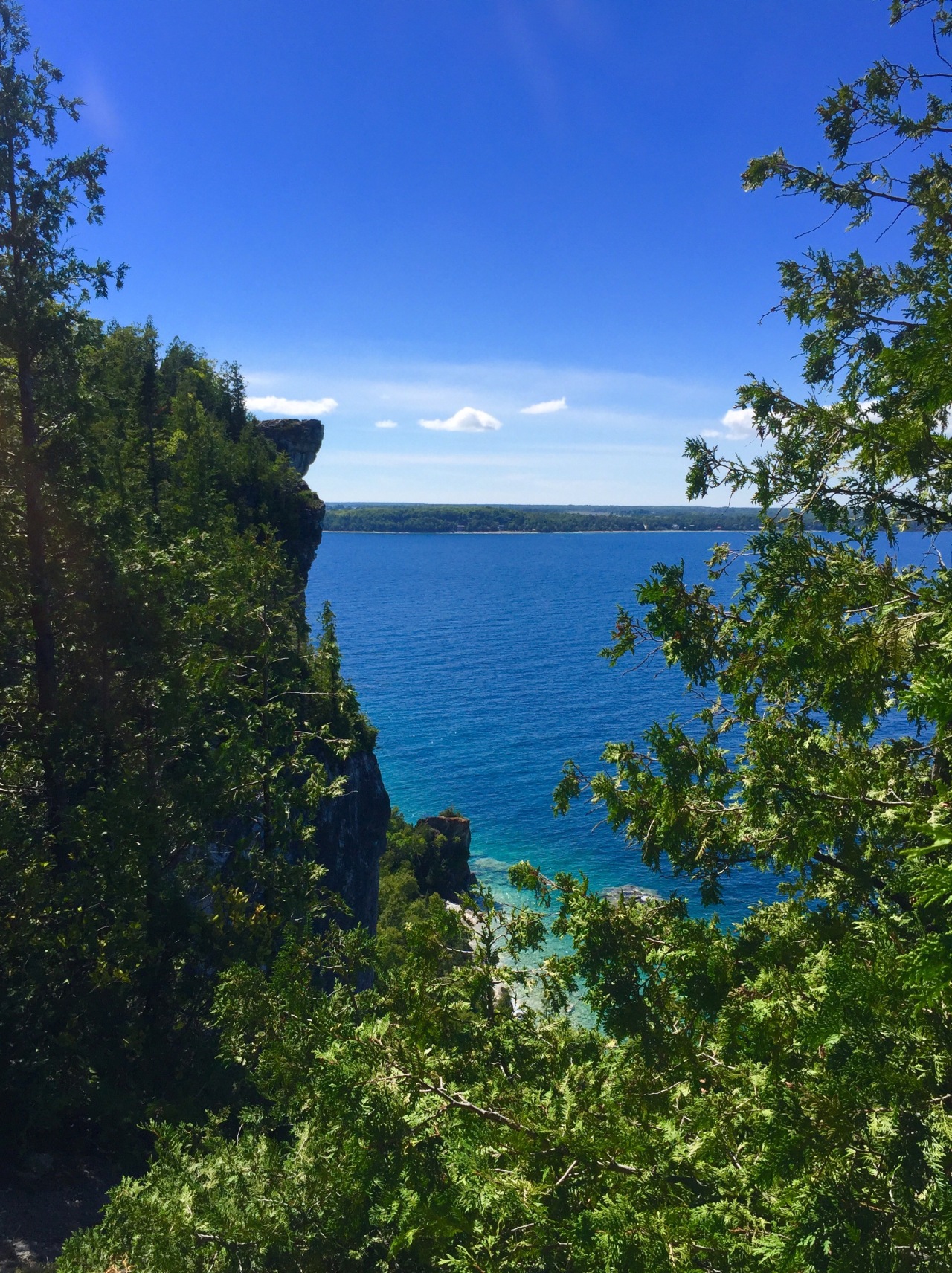 But watch your step!!! We’re now in the land of the Giants cauldrons!  Formations dating back to the last ice age!

and yes, the trail is passing between the two!

There were a number of other potholes and cauldrons to be seen along this trail!  This one, I could lay inside and look up! 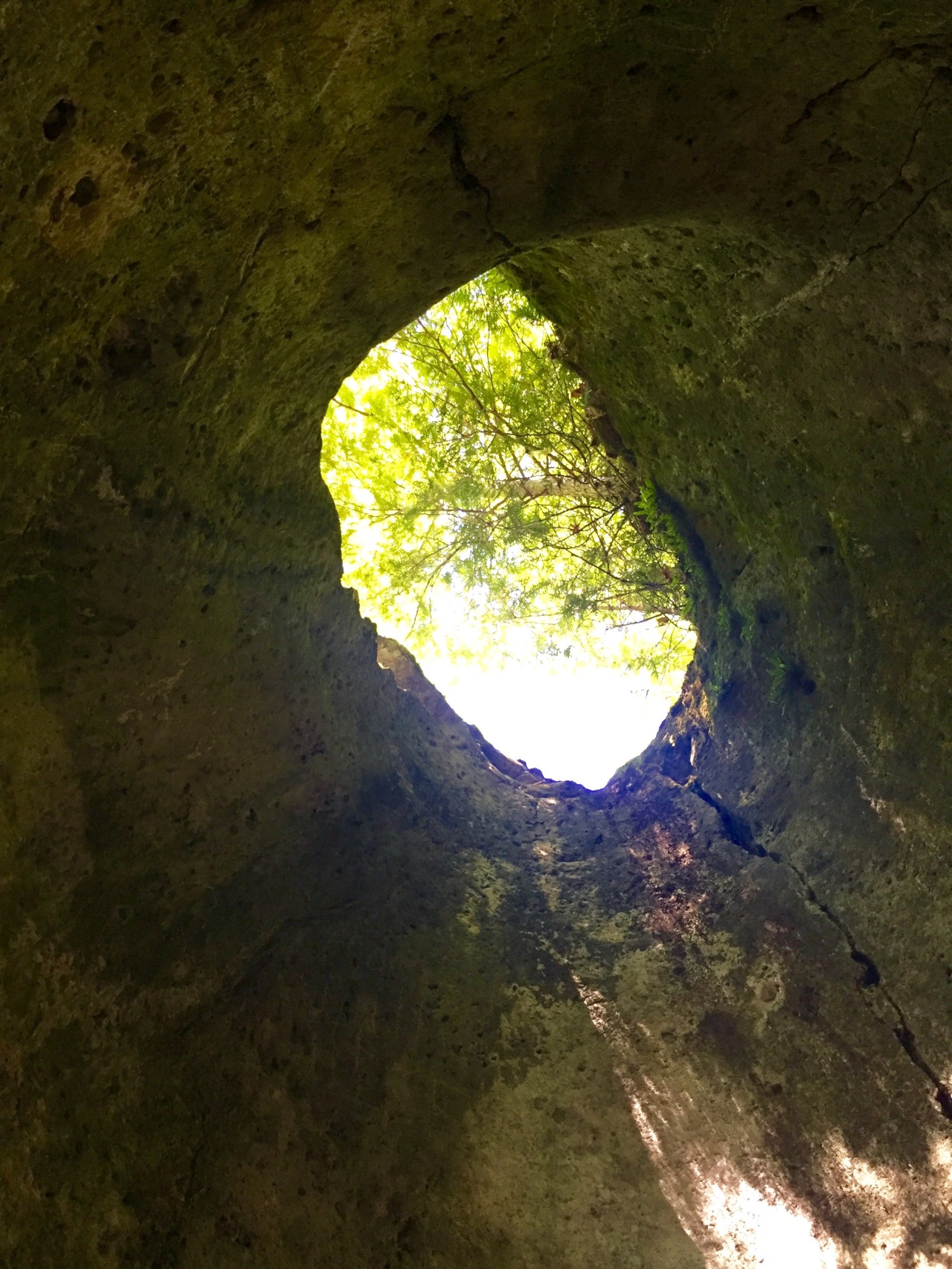 And this one was the Giants soup pot!  I told you this trail was enchanting!!!

Our trail time was coming to a close… We chose a old road / path to get to the car park…rather Camino like!  It was a side trail, but at this point, my ankles had had enough! 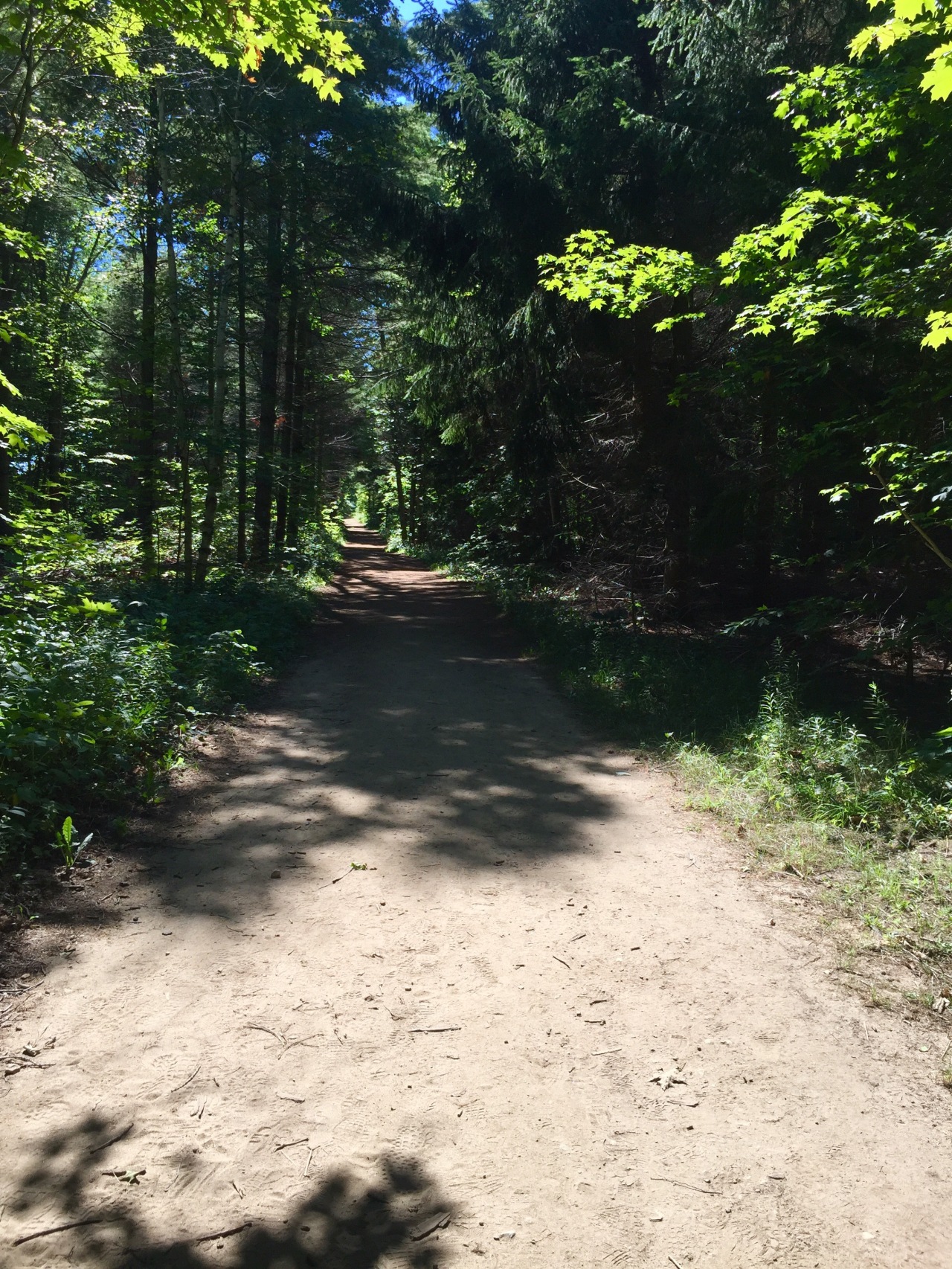 We were soon back at the car, off to retrieve the other car, then back to our campsite and hit the showers!  Once beautified ( at least smelling like we are able to rejoin society!) we set out for dinner.  Yes, tonight I didn’t have to cook, and Dan didn’t have to do the dishes!!! 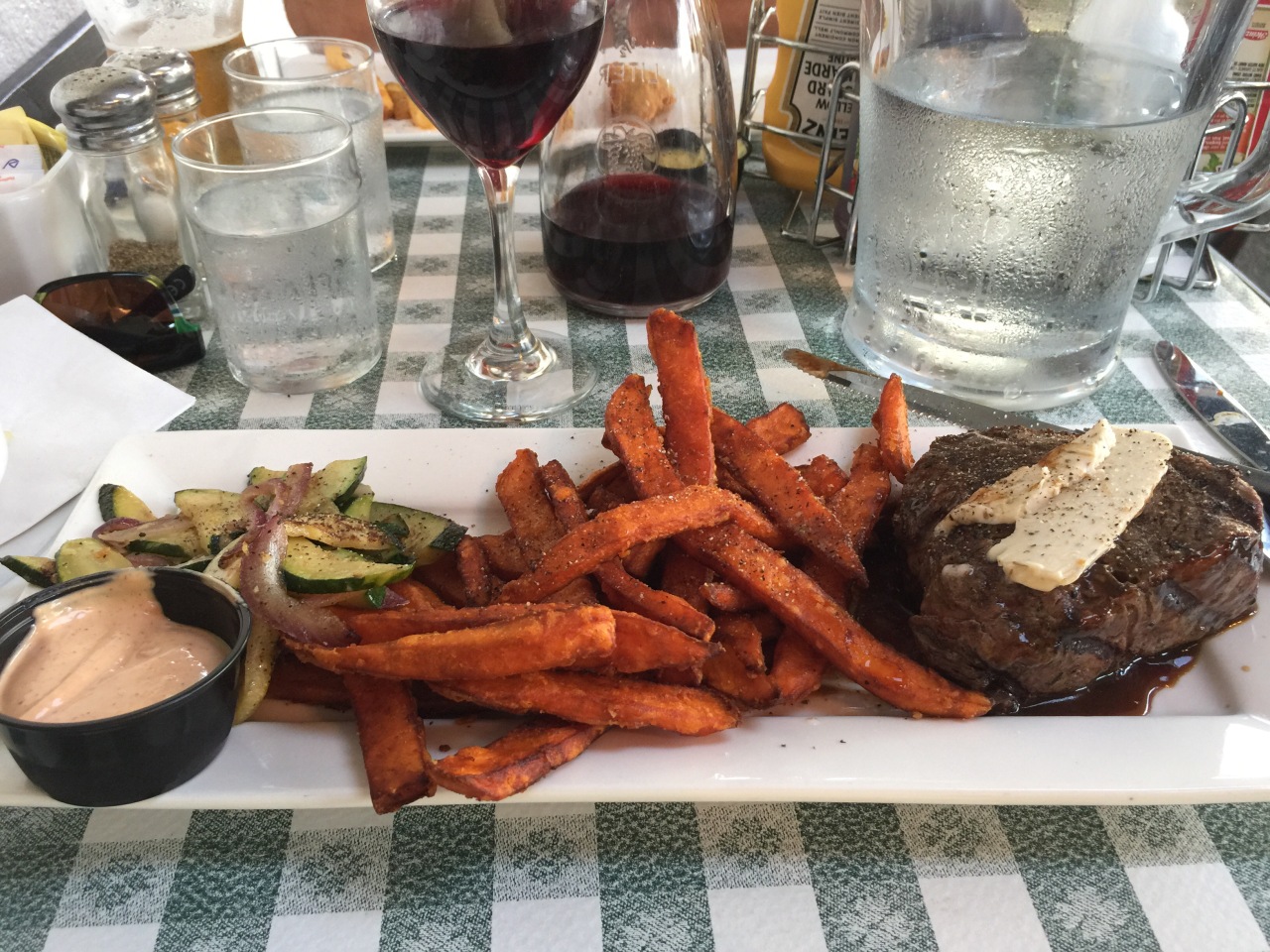 As we left our restaurant, we came across the most photographed cherry tree in Canada!  It fights the soil conditions, and while it doesn’t bear much fruit it has the most interesting truck that I’ve seen!  Lance Besharah, this one’s for you!!!

Well time for one last look back on our trek today, 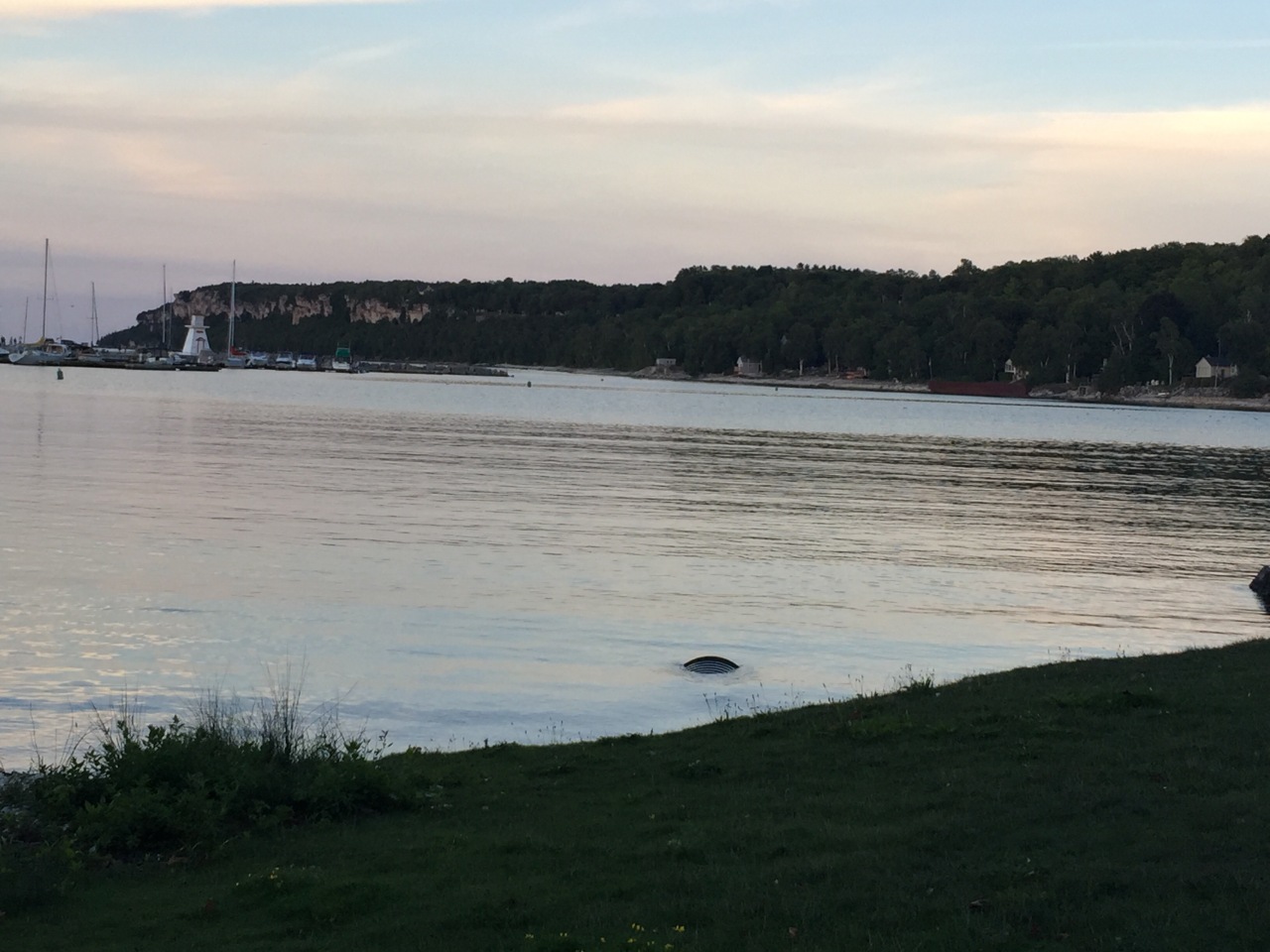 Tomorrow, we pick up from where Jocelyn, Jeff, Dan and I left off yesterday… But tomorrow night we have the luxury of a B and B for 3 nights!!! Can hardly wait!!!!  One more sleep!

Talk to you all again tomorrow!