Our day today would take us west right across the Dales to the Pennine Way. Horton on Ribblesdale was our destination. A small hamlet that sits in the shadow of the peak of Pen-y-Ghent. This peak is the shortest of the three peaks in the Pennine Way, but definitely not the easiest of climbs.

We decided to get away early…and we all packed into Glenn and Gwen’s rented trusty Vauxhall!

Off we went! We soon arrived in Horton and got the car parked, ourselves watered and equipped to hit the peak. The dominant site overlooking this little hamlet was the peak itself.

Down the road we headed, but the cherry blossoms took my breath away! Spring is definitely stinging here!

We turned off the main road and the first thing we came to was the Squirrel Cottage… I wonder why they call it that! ( that by the way is a natural forming slate stone found in the area)

The group together we were off!

The trek was slow and steady uphill for about an hour and a half. We thought we were going at a good pace until we found a couple that had run up one side, down the other and then up that side to return to the side from where they started. My Fitbit said it was the equivalent of 176 flight of stairs, so that’s quite the jog!!!

Up, up , up we went! Through fields and stiles up rocky paths, and stairs… and everywhere we looked we saw moors and sheep!!!

Got to love the colours that they have been dyed with… matching the blossoms bursting up from the soil! 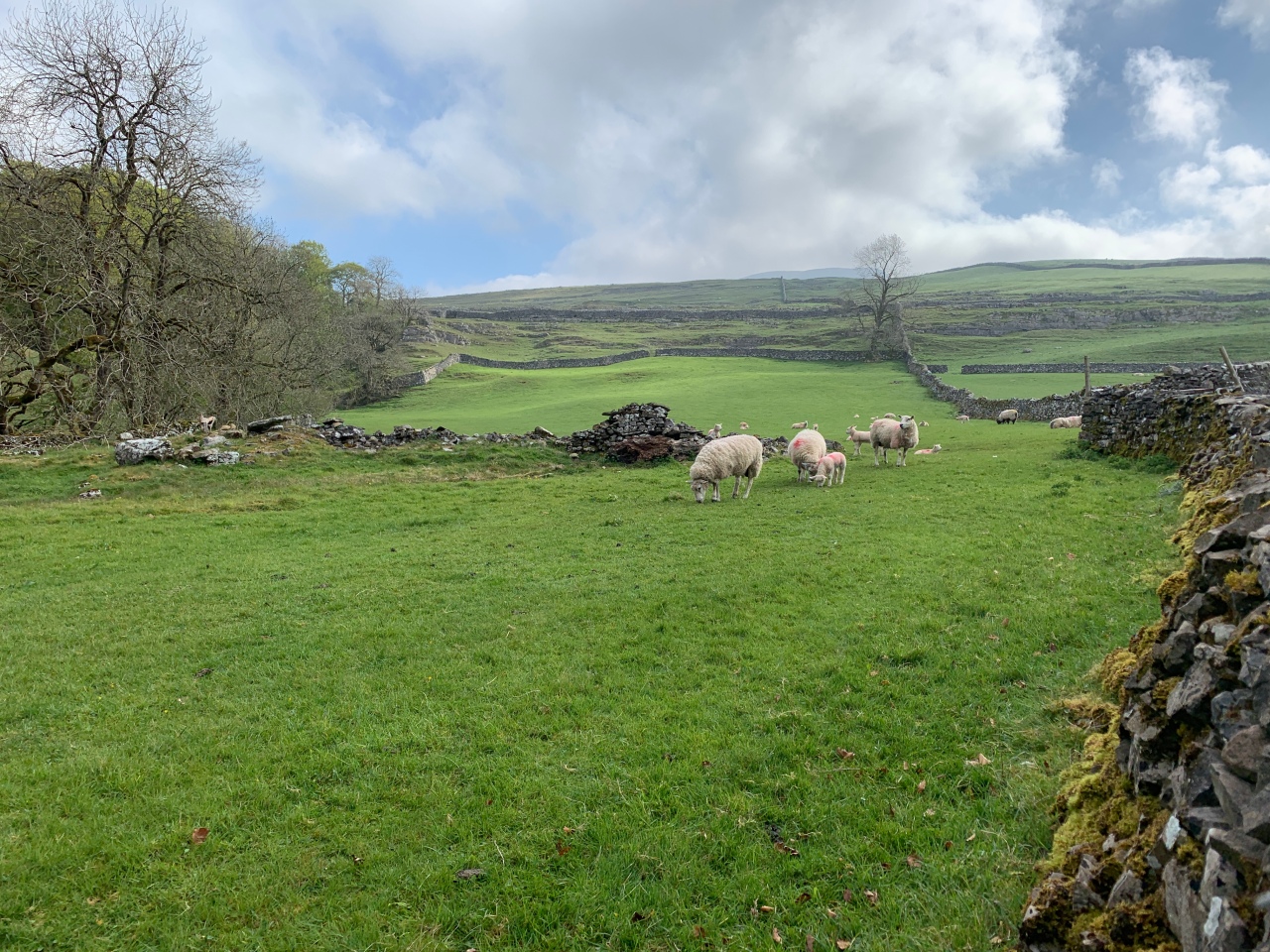 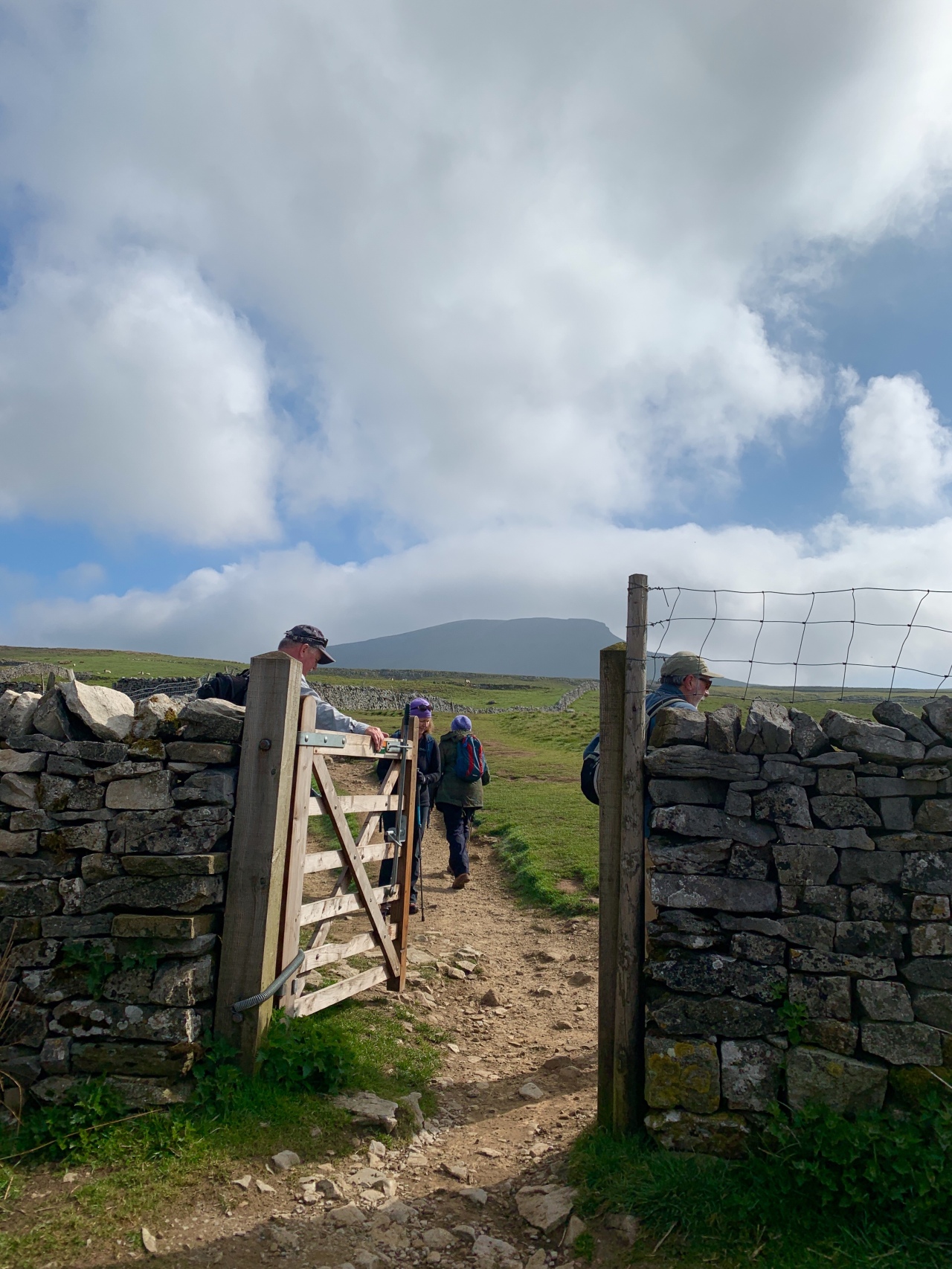 Still a long way to go, but Gwen’s still smiling!

Still up and up some more!

Thanks to Dan, I have a shot of myself heading up the path! 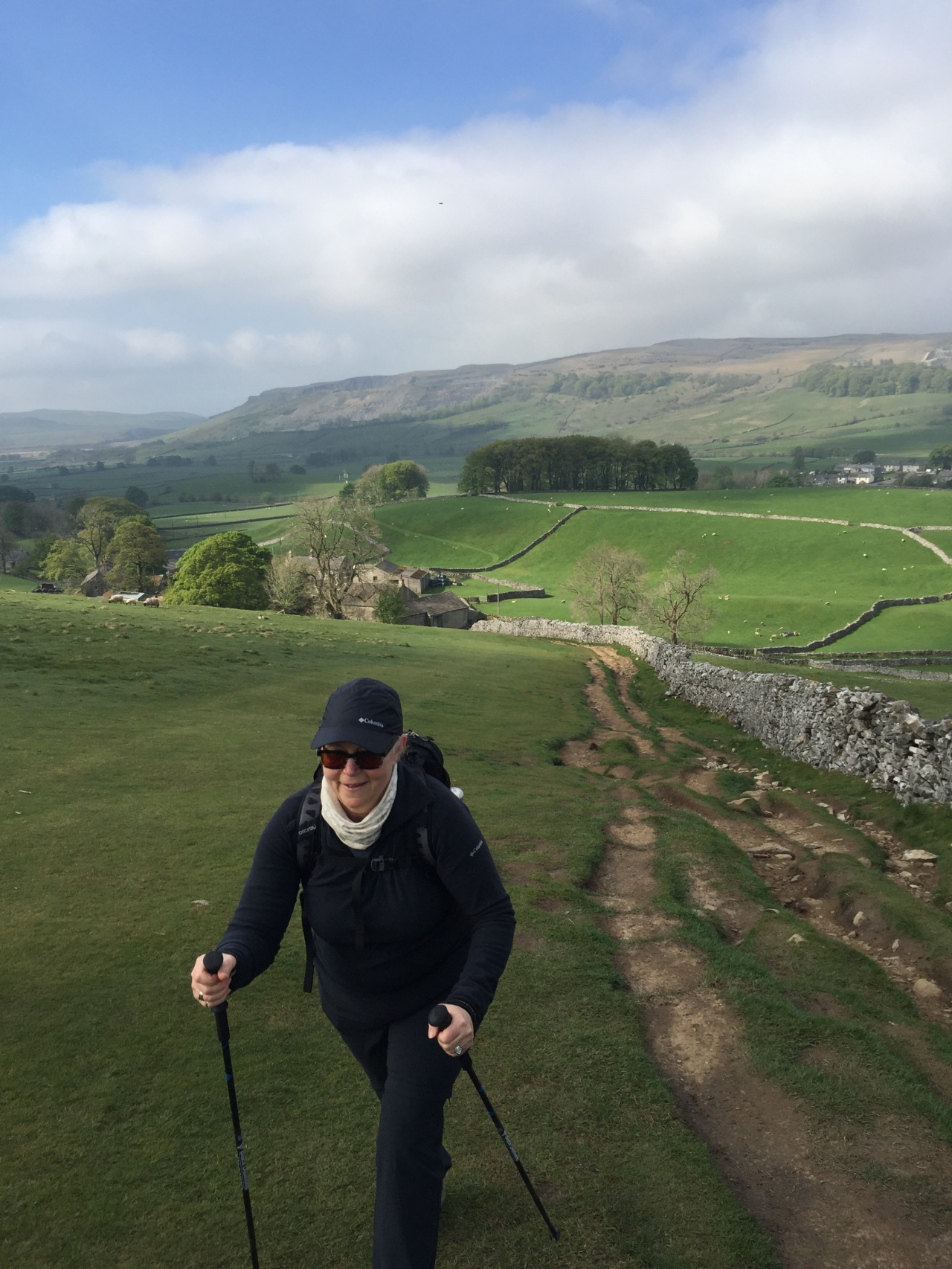 Lots and up and up, and yet look from where we’ve come! 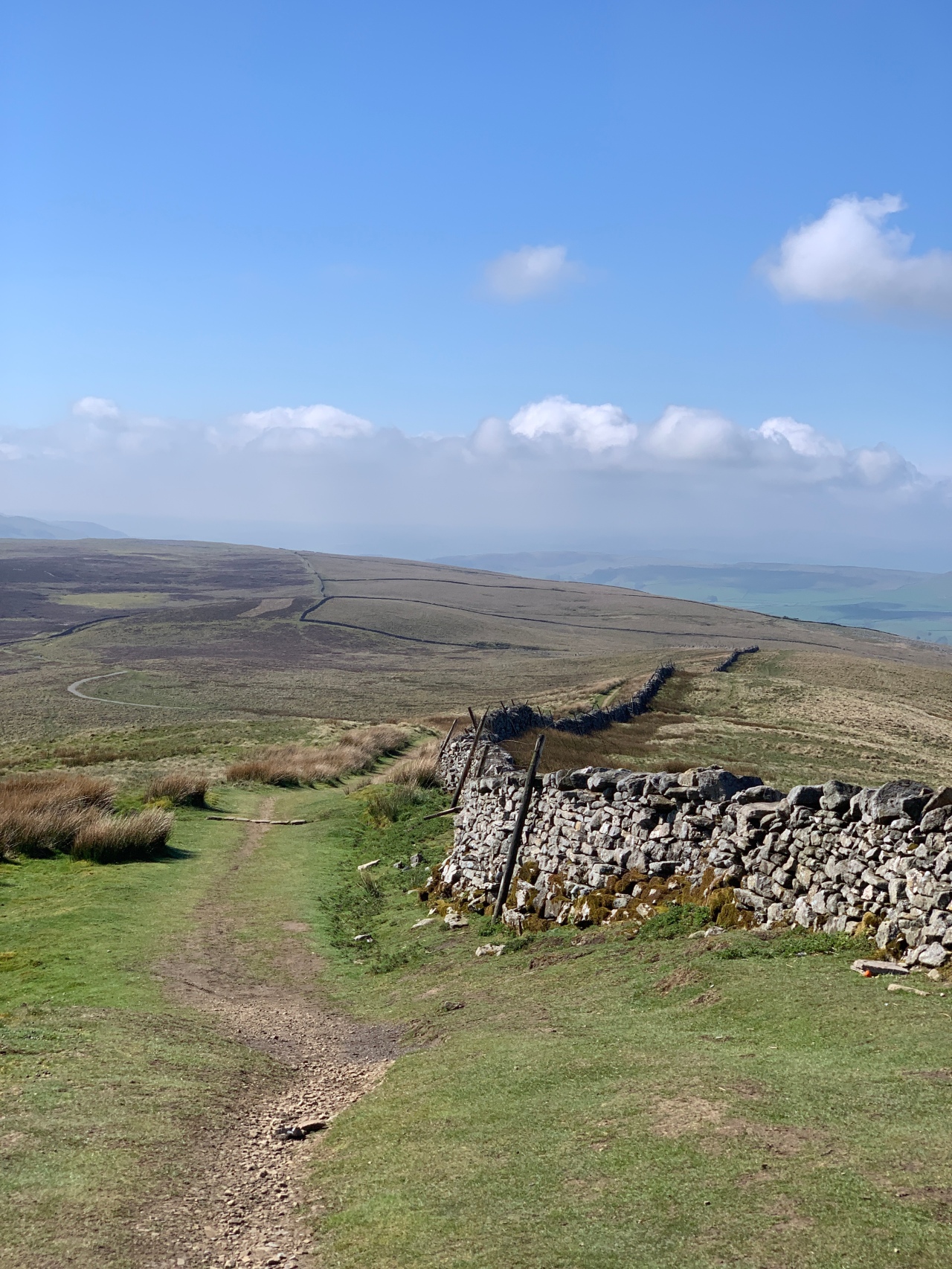 As we got nearer to the top on this face the path became steeper and steeper! I definitely am glad we were going up this slope instead of down!!! 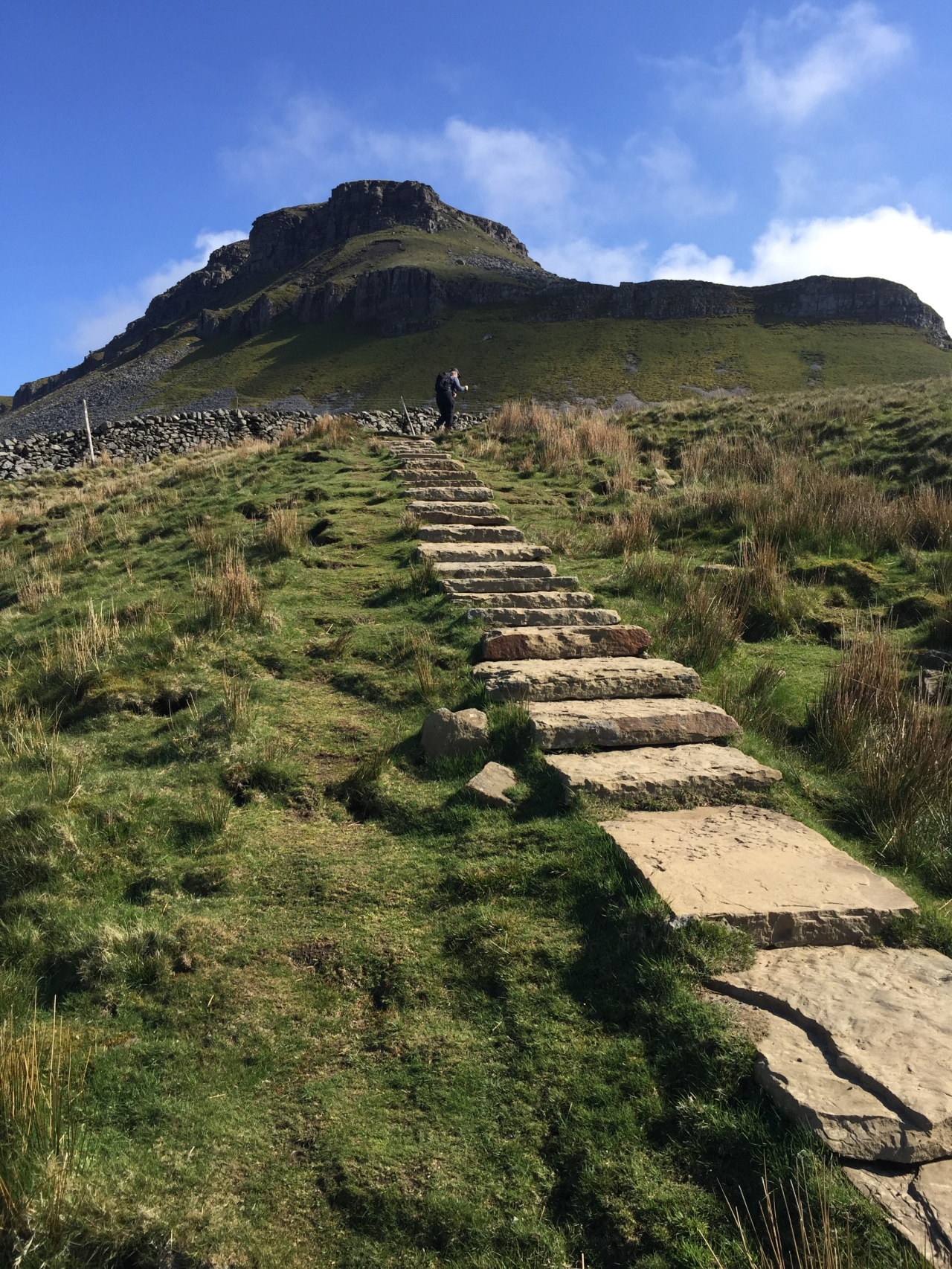 And still steeper and higher! 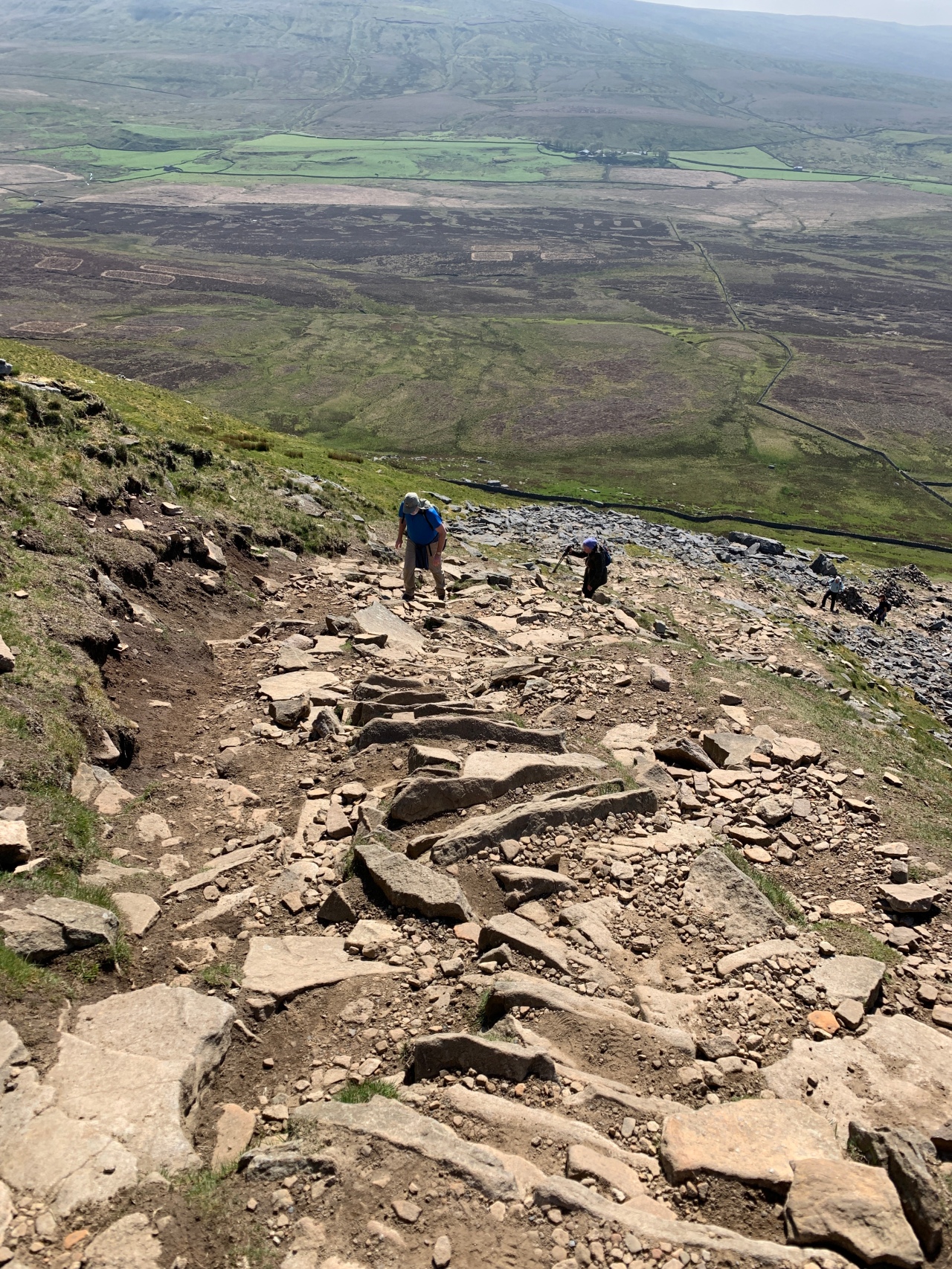 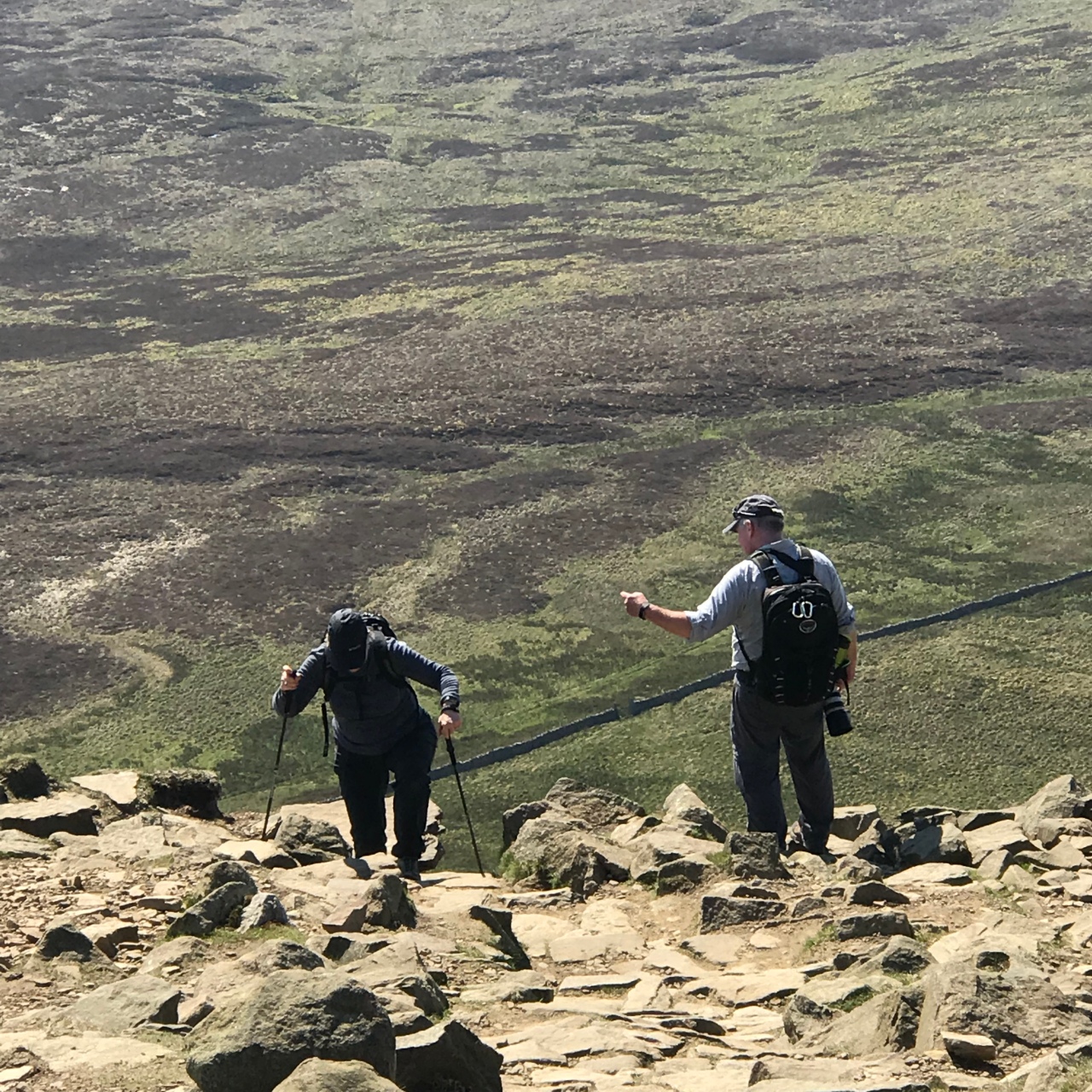 Thanks to Glenn and Gwen, I have some photos of myself celebrating the achievement of (almost) assent complete! 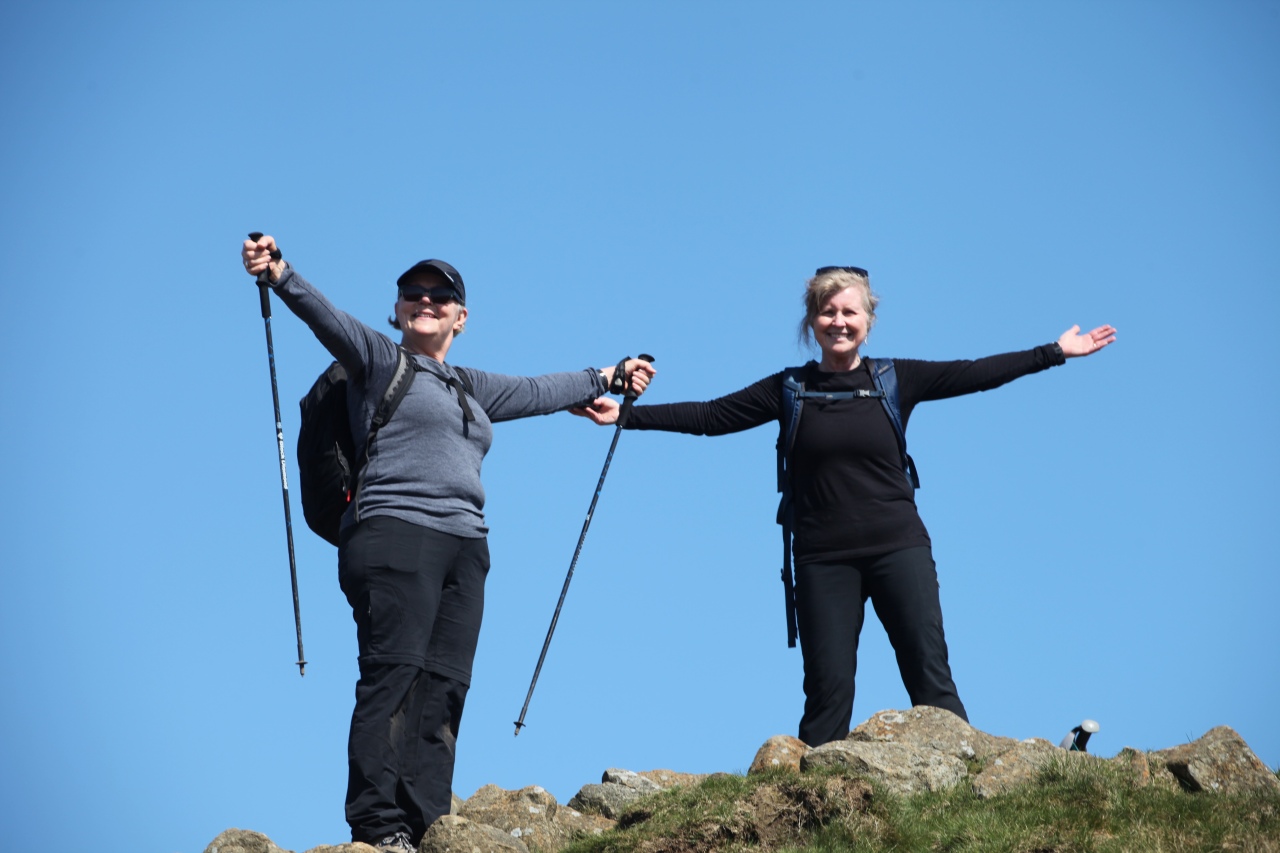 Now just a gentle slate lined path to the top, and we were there!! Thanks to a lovely German couple we were able to catch a shot of all of us at the summit!

Once at the top, we decided to sit and rest and have our lunch. We had met a man from Edinborough who went off to set up for his lunch, and when we looked over the rock wall, he had set up a tower and was talking on a radio like phone…definitely had more kit with him than we carried!

Well fed, and entertained, we decided to begin our descent. Stunning Moor land as far as the eye could see!!!

I found this handsome dude taking a break as we approached! 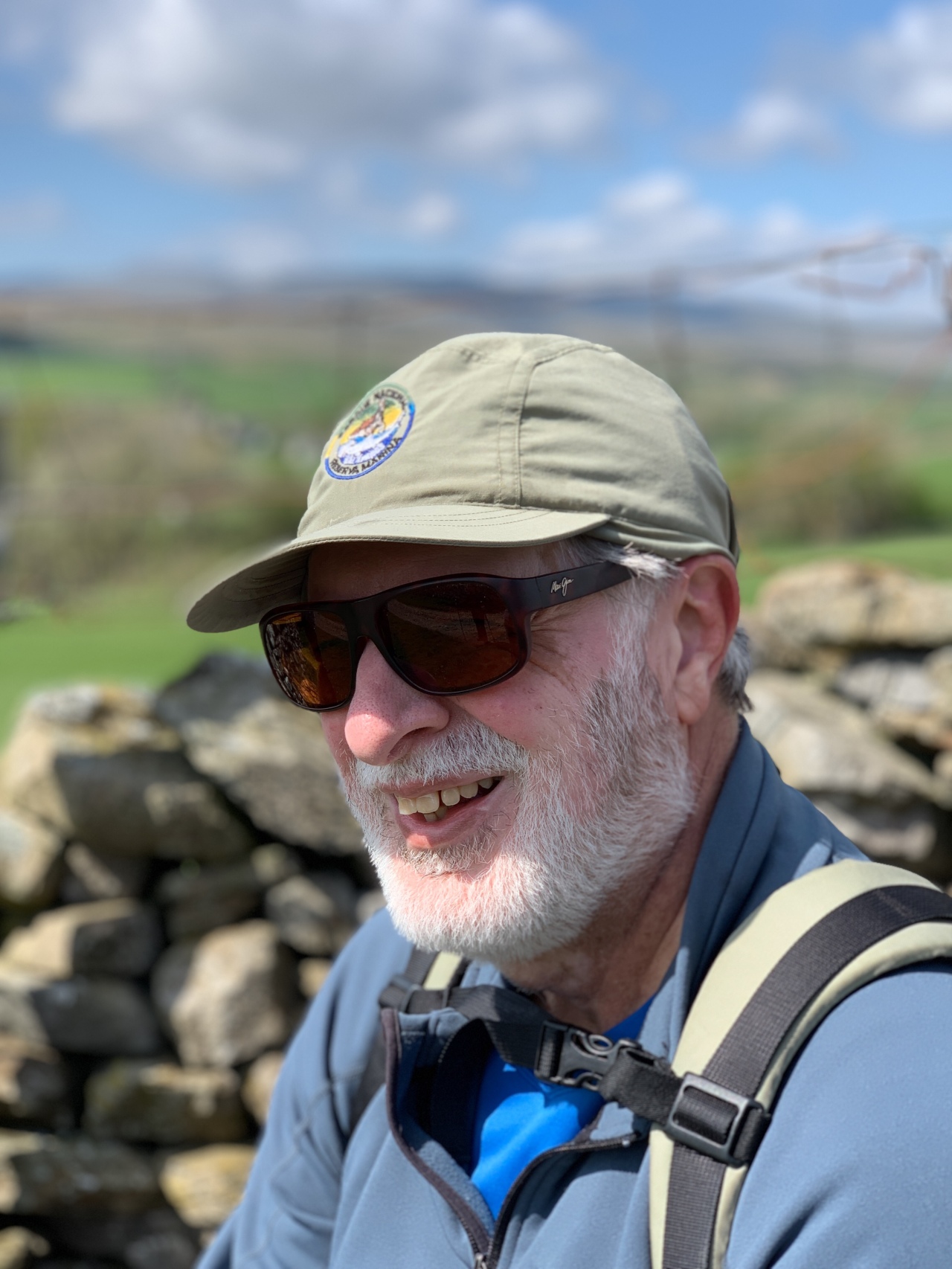 The scenery was amazing all along our descent. The quarry in the far distance reminded us of the quarry man’s pub that we would be visiting later…but first… 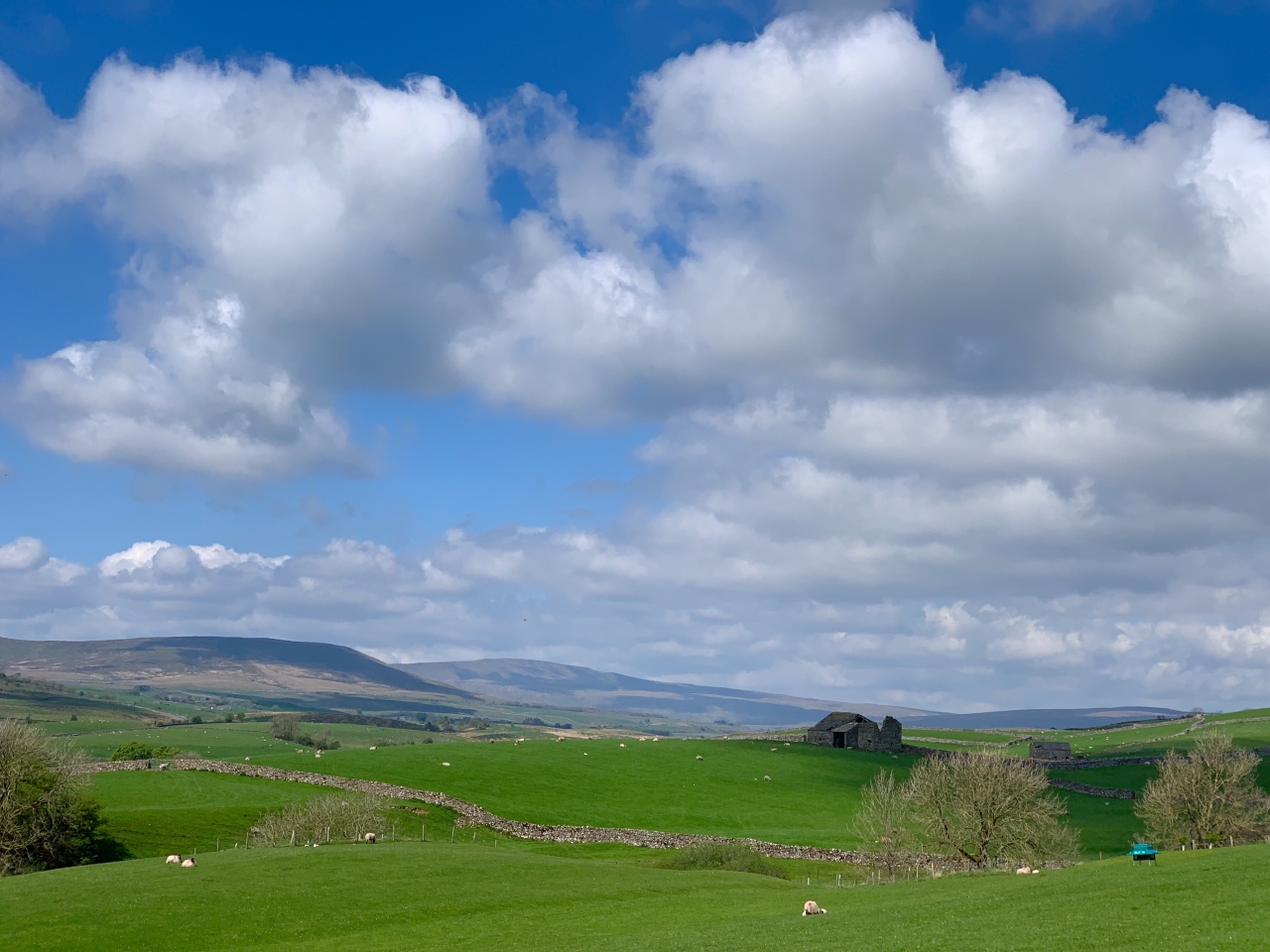 The paths were rock lined with fields of sheep and new lambs as far as the eye could see!

Success at last! The gang gathered at the car park ready to head of to a favourite haunt…the Pub at Helwith Bridge! (Yes, with three visits in 9 years, I’m becoming a regular there!!)

Even I splurged with a pint of the Helwith Bridge’s own ale…delish! 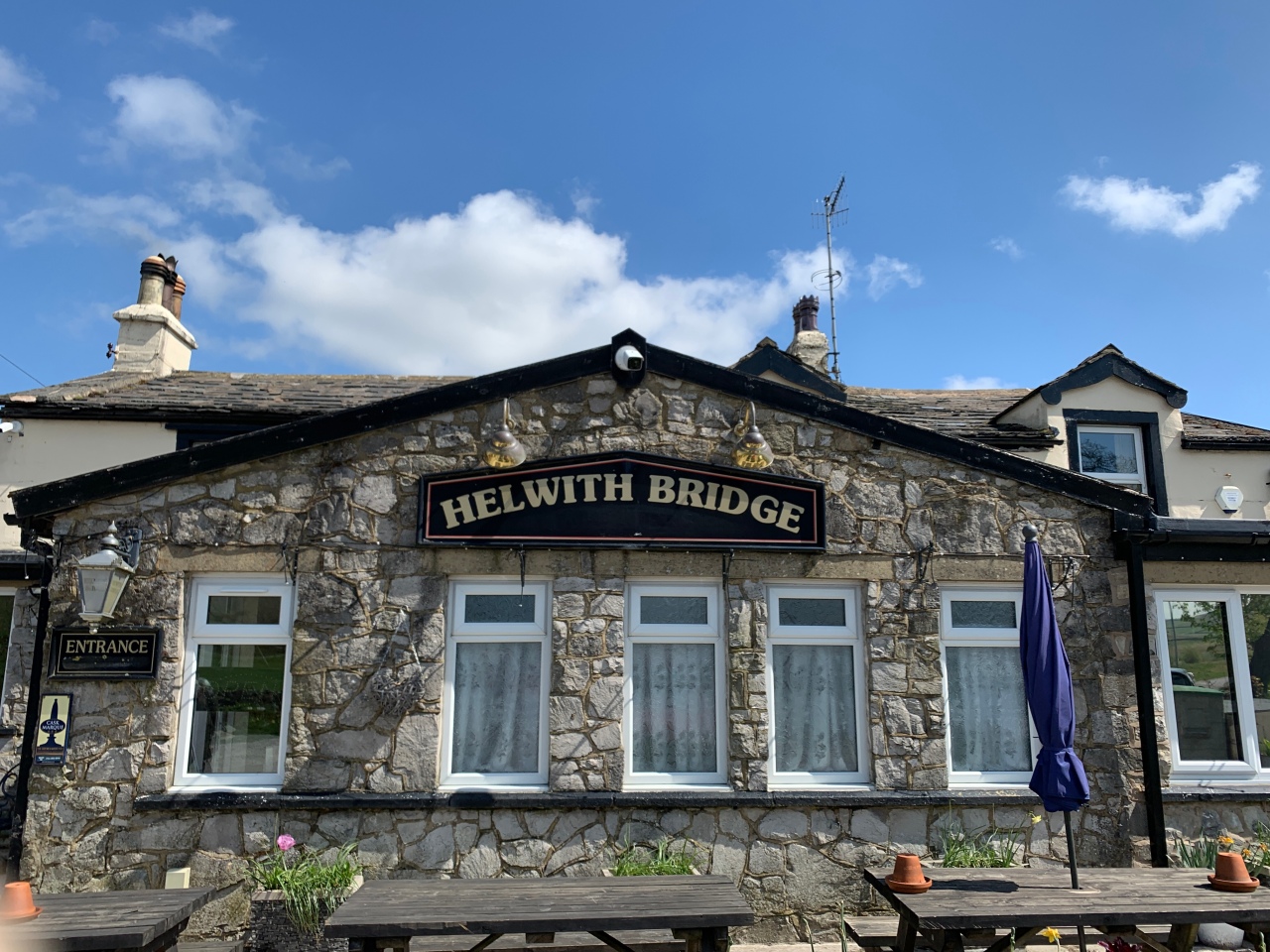 And a toast to everyone back home!

And for all you trivia nuts, what does this mean? 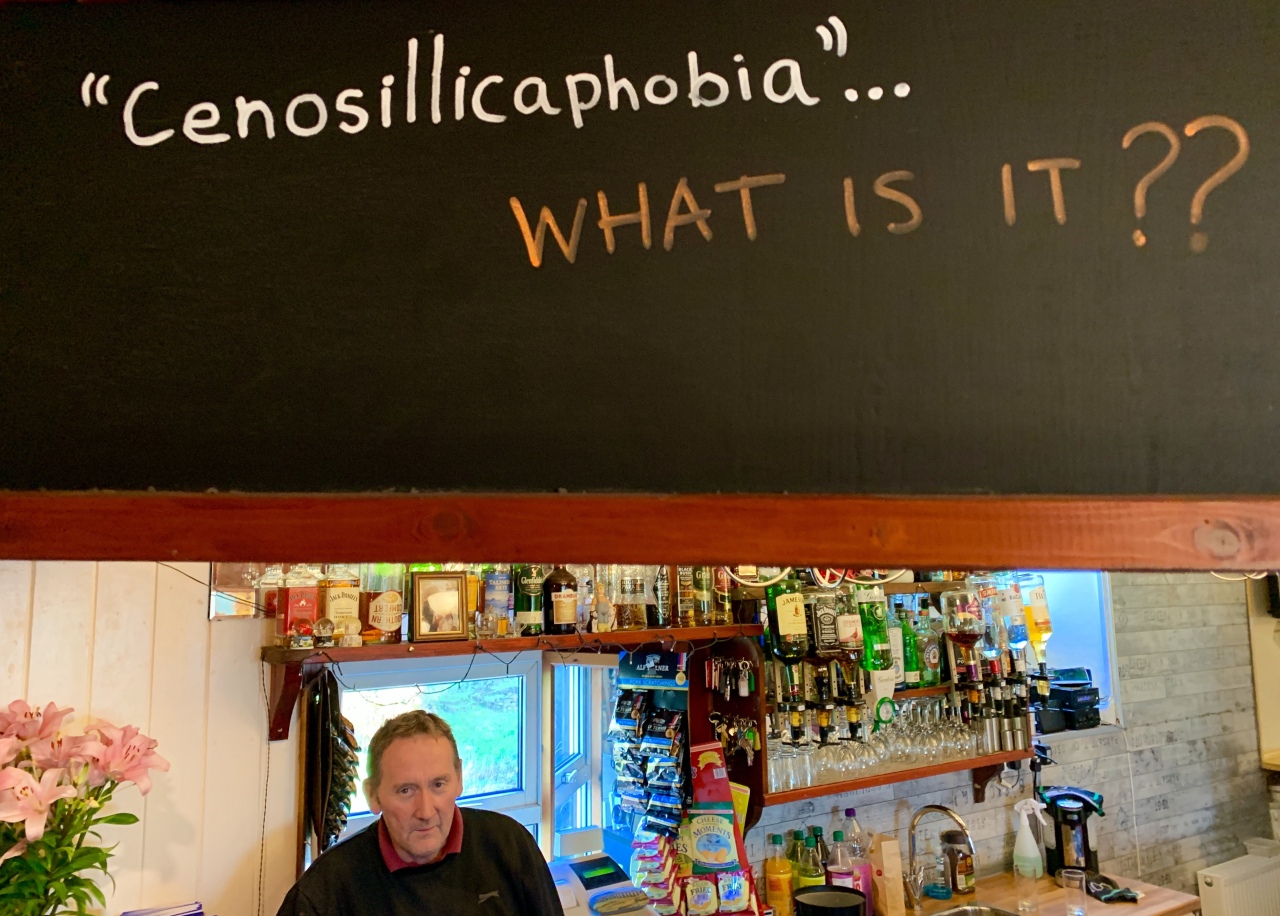 Another very full day ending with all the stuff that keep us going for another day! Until then!